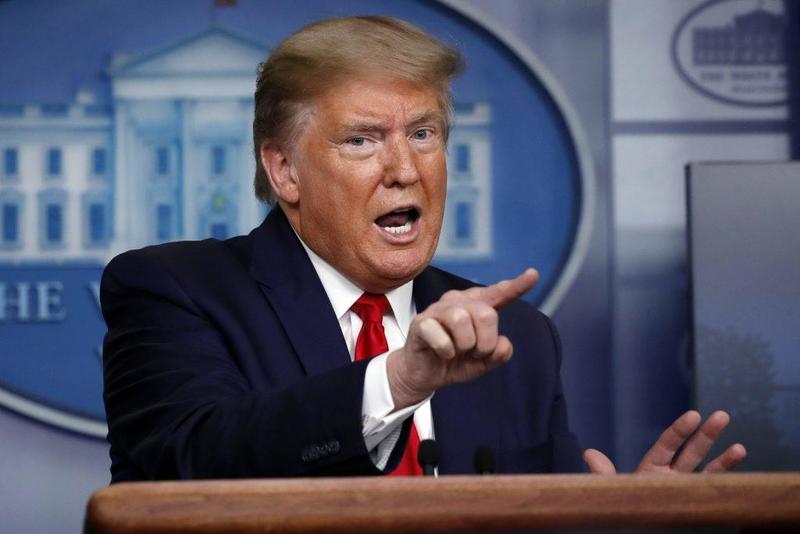 Hours after Twitter slapped a CNN Fact-Check on a Tuesday tweet by President Trump claiming that mail-in-ballots will be “substantially fraudulent,” Trump lashed out – accusing Twitter of “now interfering in the 2020 Presidential Election” by “saying my statement on Mail-In Ballots, which will lead to massive corruption and fraud, is incorrect, based on fact-checking by Fake News CNN and the Amazon Washington Post.”

“Twitter is completely stifling FREE SPEECH, and I, as President, will not allow it to happen!” he added.

….Twitter is completely stifling FREE SPEECH, and I, as President, will not allow it to happen!

In a statement emailed to Bloomberg, Trump reelection campaign manager Brad Parscale said that Twitter’s move to add fact-check links to the two tweets demonstrates the social network’s “clear political bias,” adding that “Partnering with the biased fake news media ‘fact checkers’ is only a smoke screen Twitter is using to try to lend their obvious political tactics some false credibility.”

Mere hours after Kara Swisher appeared on CNBC to call on Twitter to establish a panel of ‘content reviewers’ who can help the platform tag and remove “misinformation” – ie information that doesn’t neatly fit the narrative being pushed by one of Swisher’s employers, the New York Times – it looks like the company is taking a major step in that direction.

For the first time, Twitter has tagged tweets by President Trump as “misinformation”, and appended a link where readers can “get the facts” below the tweet’s primary text. 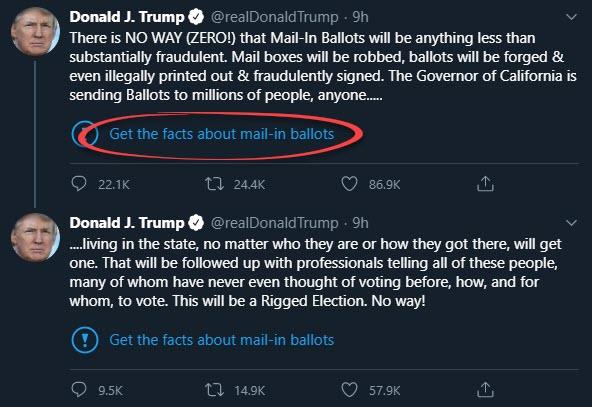 The tweet, sent earlier today by the president, was the latest in a series of missives opposing mail-in ballots, which the president has insisted would lead to widespread voter fraud.

According to Twitter spokesperson Katie Rosborough, who spoke to the Washington Post about the new policy, Trump’s tweets “contain potentially misleading information about voting processes and have been labeled to provide additional context around mail-in ballots.”

Evidence of widespread voter fraud in the US has yet to materialize, despite the fact that half the country seems to think that Russia somehow rigged the election in President Trump’s favor. To be sure, there have been isolated incidences of voter fraud in recent years that have given some experts reason for concern – though these have been completely ignored, as they don’t fit the narrative that the crime is “totally nonexistent”

But instead of allowing readers to reason this out for themselves (something that shouldn’t be all that difficult given the thousands of replies calling Trump a racist liar), Twitter is stepping in to play the role of arbiter of truth.

An opinion column published in today’s WSJ hinted at a notion that has become increasingly obvious in the Trump era: An absolute truth is an extremely rare thing. Even the NYT has allowed a defined, liberal perspective infect its reporting over the years, as the column’s writer argued, and if the media wants to regain the trust of the public, it’s time to acknowledge that it doesn’t have some kind of monopoly on the truth.

Twitter has reportedly considered affixing warning labels to Trump’s tweets in the past, though Dorsey has insisted that Twitter would never remove a tweet from Trump, as Swisher urged the company to do. However, apparently, a letter sent to Dorsey by the widower of a former intern in then-Congressman Joe Scarborough’s office begging the company to remove several Trump tweets – tweets that allegedly perpetuated a ‘conspiracy’ about the death of the man’s wife – pushed the company over the edge. Though notably those tweets haven’t been touched.

Now, will Twitter apply the same scrutiny to Joe Biden?

And on issues of science, upon which science will twitter rely?

Though the company hasn’t said much, we suspect this won’t be an isolated incident. Will twitter now go full-on CCP and hire a ‘propaganda board’ to review all content on the site? We imagine we’ll learn more about the company’s plans in the coming days.