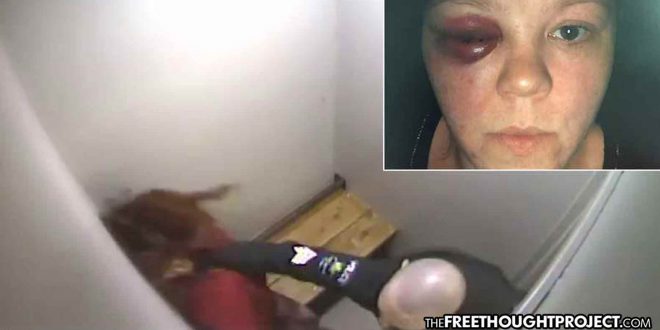 St. Albans, VT — As TFTP has consistently reported, police officers in America beat and abuse their spouses and girlfriends at a rate far higher than the national average. Knowing that many officers have this propensity to beat women with whom they are in a relationship, it should come as no surprise that women they do not know are fair game as well. As the following disturbing video illustrates, even handcuffed non-threatening women can and will become the victims of woman-beating cops and it is the taxpayers who clean up their mess.

This month, Amy Connelly announced a lawsuit against the city of St. Albans for civil rights violations after she was viciously beaten while in handcuffs.

Sgt. Jason Lawton of the St. Albans police department was fired in March 2019 after it was discovered that he savagely beat a handcuffed woman for no reason and lied to justify the abuse.

“I think that his actions in this case are a poor reflection of the values of the people who make up this organization,” St. Albans Police Chief Gary Taylor said at the time.

Indeed they are, but Taylor is alleged to have help cover them up. According to sevendaysvt.com,

Police department leaders said the incident went undetected until the American Civil Liberties Union of Vermont filed a records request two months later, though one retired officer has claimed Taylor covered it up. Lawton was fired and charged with assault last November. Taylor has said the other officers’ involvement was “minimal” because they didn’t see Lawton deliver the punch. Ferguson now works for the Franklin County Sheriff’s Office, which cleared him of wrongdoing in the Connelly case.

Luckily, Lawton was not so fortunate as to be cleared, and in November he was hit with a misdemeanor charge of simple assault. He pleaded not guilty.

According to police, Connelly, 35, was arrested for disorderly conduct on March 14, 2019, after she reportedly drunkenly ripped a man’s shirt and refused to leave a bar. She was subsequently arrested and thrown in the St. Albans Police department jail.

As the video shows, Connelly was upset and kicking her feet against the door. Instead of simply ignoring the woman who couldn’t harm anyone while handcuffed and locked in a cell, Lawton opened the door and shoved the woman against the wall.

According to Lawton’s report, Connelly then jumped up and kicked him so he had no other choice but to deliver a fist to her face and slam her to the ground.

However, the alleged kick never happened.

As sevendaysvt.com reports, police video of the incident, captured from different angles and filed in court last year, does not support the assault allegation, according to attorney Albert Fox. Rather, he wrote, in a motion asking the judge to throw out the charges, the footage shows Lawton assaulting Connelly, and represents “an absolute miscarriage of justice and a shameful abandonment of the duty police officers owe the public.”

As the video shows, Connelly is sitting in a tiny room with her hands handcuffed behind her back. As she starts kicking the door in protest, Lawton opens the door and tells her to stop.

“No,” she responded as she stood up.

To “protect” himself from the handcuffed woman, Lawton threw her against the wall, saying, “Don’t come at me like that.”

“How f**king dare you!” she yelled back. “He has hurt me!” she told another officer.

“Shut up!” Lawton yelled at her.

When Connelly stood up once more and raised her leg, Lawton reared back and delivered an uppercut to her face and then slammed her to the ground.

“Oh my God, you guys … You guys are brutes!” Connelly said as she’s being held to the floor by multiple officers while she is still in handcuffs.

“Yup, sure. You just tried to take me,” Lawton responded.

“You guys are animals,” Connelly said crying. “Why would you do this? You guys have abused me!”

According to sevendaysvt.com, Lawton described the altercation in just a few sentences in his court affidavit, writing that he “delivered a front distraction strike to the right side of her face in an effort to gain control of her. This strike had the desired effect, as it distracted her from her aggressive behavior.”

Lawton’s report indicates that officers “immediately” called EMTs. She was handcuffed to a bar in the cell for about 10 minutes before medics came, the police video showed.

“She was eventually transported to the hospital,” Lawton wrote.

“The video speaks for itself,” Connelly’s lawyer said.

“I completely stand by the motion and believe that this charge was a miscarriage of justice,” he said, referring to the simple assault case.

We agree. If you can be okay with beating a handcuffed woman, you have no business being a free man much less a public servant.

Citizens of St. Albans should be worried as there is a dark cloud over their department. Aside from the cops beating handcuffed women, as TFTP reported last month, another St. Albans police officer just received a hefty dose of blue privilege over his alleged crimes. He was arrested for allegedly breaking into a woman’s home, beating her up, throwing her down a flight of stairs, and burning her repeatedly with a cigar. For good measure, he took his father along with him — who was also arrested for his role in the incident.

According to the victim, as reported by the St. Albans Messenger, she says two men she identified as Zachary and his father Allen Pigeon entered her home the first weekend in April, dragged her from the couch where she was sleeping, threw her down some stairs and off her porch, then pulled her back up it and again threw her down again, this time off a section of porch with no stairs, before burning her back with a cigar. The duo allegedly carried out this torture and kidnapping to keep the victim silent over officer Pigeon raping her as a child.

Despite these grim allegations, after Officer Zachary Pigeon, 29, and his father Allen Pigeon, 56, each pleaded not guilty Monday to five charges: simple assault, kidnapping, obstructing justice, burglary, and unlawful restraint and they were released without bail and walked out of the courtroom.