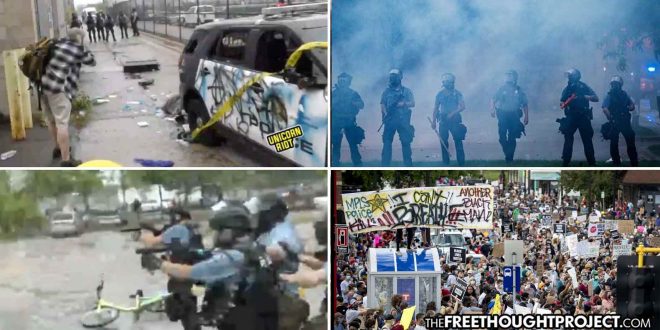 Minneapolis, MN — As TFTP reported Tuesday, police officers in Minneapolis were caught on video as they responded to a call over an alleged “forgery in progress.” In the disturbing 10-minute viral video, officers hold down 46-year-old George Floyd with a knee on his neck — for over five minutes — until he died. The video was so disturbing in nature that thousands of people took to the streets of Minneapolis to protest on Tuesday. While much of the protest remained peaceful, in front of the police station, all hell broke loose.

After the video went viral, the city announced that the four cops involved in Floyd’s arrest and death were all fired. Their names were not publicly released, however, sources confirmed to the Star Tribune the officer with his knee on Floyd’s neck was identified as Derek Chauvin while the other officer who joined in was Tou Thao.

As the protests began to grow in size, hundreds if not thousands of demonstrators marched to the department’s third precinct. Much of the march was live-streamed by Unicorn Riot. The footage is incredible.

During its march, the crowd chanted, “I can’t breathe” and called for the arrest of the officers involved. Floyd’s last words on this planet consisted of “I can’t breathe.”

“This will happen again if we don’t get out in front of this,” said community activist Al Flowers, who called Floyd’s death “one of the most egregious murders I’ve ever seen.”

Nico, with Unicorn Riot, interviewed many protesters who said enough is enough and pointed out how they are tired of watching black men die at the hands of cops. As protesters smashed cop cars and vandalized the police station, others stood out in support of these acts, noting “what’s a police car, when compared to George Floyd’s life?”

The vandalism continued unchecked for some time before cops in gas masks and riot gear descended on the scene with tear gas. As they fired the canisters into the crowd, protesters hurled them back at the officers.

The glass in front of the department was shattered and multiple police vehicles were destroyed.

While TFTP does not condone unprovoked property damage, as in the cases of rioters destroying innocent businesses during protests, private businesses appeared to be left out of the damage. The police killed a man and the protests and subsequent damage was directed at police and no one else.

This tactic of only targeting police property will likely deter much of the criticism toward protesters who many will argue have every right to be angry. All too often, protests, like the ones we watched in Ferguson, targeted innocent ‘mom and pop shops’, some of which were burned to the ground during the Michael Brown protests. This arbitrary destruction of property is never a tool to garner support and is always picked up on by critics as a means of discrediting the other legitimate protesters.

Time will tell if those who have been protesting the lockdowns will show their support for the other protesters who are standing up to injustice.

As TFTP reported, the video should outrage even the most ardent police supporters. As the disturbing video shows, Floyd, who had only fit the description of a forgery suspect was thrown to the ground by police and held under a police officer’s knee for at least five minutes. Five minutes with a knee on his neck.

“My stomach hurts. My neck hurts. Everything hurts. … (I need) water or something. Please. Please. I can’t breathe, officer. … I cannot breathe. I cannot breathe,” Floyd begged. That was followed by more groaning and as the last moments of life left this man’s body, officers did not help him up or remove the knee from his neck.

In an ongoing commentary captured in the video taken by Darnella Frazier, a male onlooker says, “That’s bulls—t, Bro. You’re stopping his breathing right there, Bro. Get him off the ground, Bro. You’re being a bum right now.”

“They kept telling us ‘if he can talk he can’t breathe,”’ Frazier wrote on Facebook. Sadly, the cops were wrong.

After watching the incident unfold and realizing that the officers could’ve gotten the man in the car in all this time, an onlooker makes a disturbing observation. The cops appear to be enjoying treating this man like this.

The man says the officer is “enjoying that. He’s a bum, bro. You could have put him in the car by now. He’s not resisting arrest or nothing. You’re enjoying it. Look at you. Your body language – you bum. You know that’s bogus right now.”

This is why people are angry.