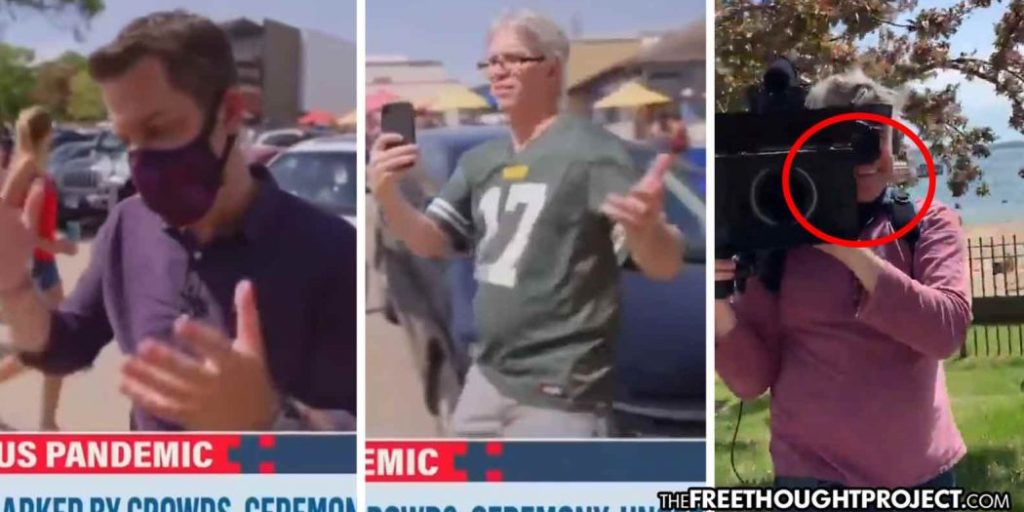 Lake Geneva, WI — To those who have been paying attention over the last couple of months, the mainstream media’s coverage of the pandemic has been unethical, inconsistent, divisive, and in some instances outright false. The media has gone from telling Americans not to wear masks to shaming them for not wearing masks. Not surprisingly, their impetus behind this mask shaming is utterly hypocritical, as the following video shows us.

An MSNBC correspondent attempting to shame people on the streets of Lake Geneva, Wisconsin, for not wearing masks was called out by a passerby and left speechless as his hypocrisy was exposed.

MSNBC News correspondent Cal Perry was live on television when he was telling Katy Tur, “There doesn’t seem to be any social distancing and not a lot of care when it comes to the coronavirus.”

As he is shaming all the folks around him for not wearing a mask, he has the cameraman pan over to the passerby and said, “see, nobody’s wearing them.” The hypocrisy of MSNBC was then exposed in beautiful splendor.

As Perry attempted to shame the man for his lack of mask, the man quickly fired back, “Including your cameraman. Half your crew’s not wearing masks!”

The man then walked around with his cell phone, taking his own video, showing that 2 of the 4 crew members who were using their platform to shame folks for not wearing masks — were not wearing masks.

Perry was left speechless. The resultant 5 seconds of video was utterly epic as Perry and Tur stumbled to cut away from the scene as their hypocrisy blew up on national television.

You asked for it! Gotta love Cal Perry reach out and touch the cameraman who is not wearing a mask and is not social distancing…and who also touched his face. Breaking ALL the rules! pic.twitter.com/5UGQHTmNOX

MSNBC’s hypocrisy is not unique to their outlet or the MSM in general as this behemoth propaganda outlet thrives on misinformation. What’s more, it is no secret that over the last 4 decades, mainstream media has been consolidated from dozens of competing companies to only six. Hundreds of channels, websites, news outlets, newspapers, and magazines — making up ninety percent of all media — is controlled by very few people—giving Americans the illusion of choice.

While six companies controlling most everything the Western world consumes in regard to media may sound like a sinister arrangement, the Swiss Propaganda Research center (SPR) released information that paints an even darker picture.

The research group was able to tie all these media companies to a single organization—the Council on Foreign Relations (CFR).

For those who may be unaware, the CFR is a primary member of the circle of Washington think-tanks promoting endless war. As former Army Major Todd Pierce describes, this group acts as “primary provocateurs” using “‘psychological suggestiveness’ to create a false narrative of danger from some foreign entity with the objective being to create paranoia within the U.S. population that it is under imminent threat of attack or takeover.”

A senior member of the CFR and outspoken neocon warmonger, Robert Kagan has even publicly proclaimed that the US should create an empire.

The narrative created by CFR and its cohorts is picked up by their secondary communicators, also known the mainstream media, who push it on the populace with no analysis or questioning. One need only look at their reporting on coronavirus to understand this reality.

They simply regurgitate the same information and act as little more than passive reverberators for the establishment’s narrative — regardless of whether or not that narrative is factually accurate.

When looking at the chart from SPR, the reach by this single organization is so vast that it is no mystery as to how these elite psychopaths guide Americans into accepting endless war and the arbitrary attacks on the Constitution throughout the COVID-19 outbreak.

While this may seem like a bleak scenario, the fact is that this battle over information is centuries old. Just as the Anti Federalists fought to inform early Americans over the dangers of a Constitution without a Bill of Rights, those who’ve longed for freedom and liberty have continued this information war up into the 21st century — effecting massive changes in their wake.

It does not take a majority to prevail… but rather an irate, tireless minority, keen on setting brushfires of freedom in the minds of men.

It is our responsibility — not the mainstream media’s — to continue to share this information that challenges the status quo of hypocrisy and lies and make sure these brushfires never get extinguished.