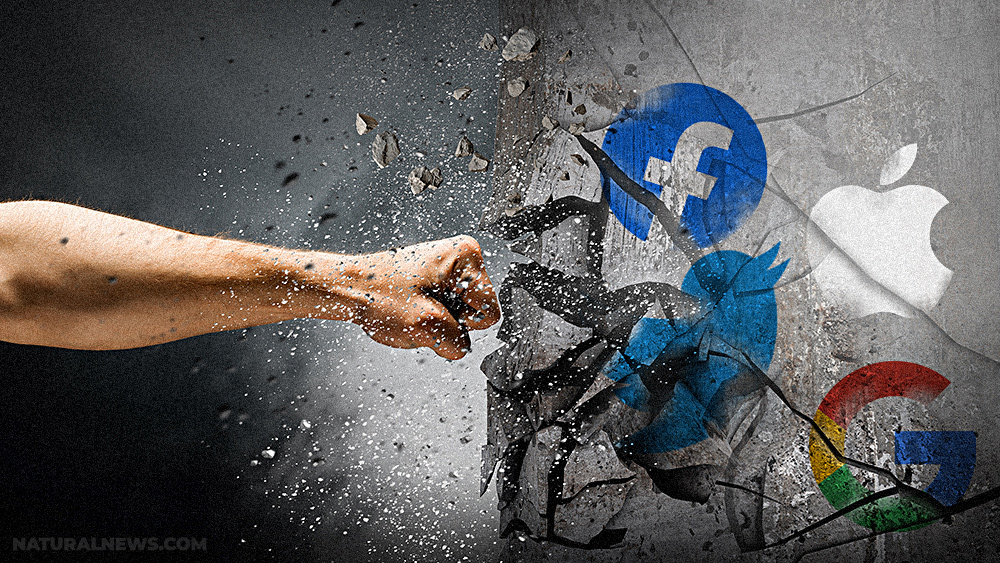 (Natural News) A draft of President Trump’s impeding executive order that targets the censorship and political bias of the tech giants has been leaked online. You can view the draft at this link from NewsTarget.com (PDF), which ironically is banned by Facebook and all the other tech giants.

UPDATE: The President has signed the EO and the full text is now posted at the WhiteHouse.gov website.

This article summarizes the key points of the executive order, which stands as the first real action President Trump has taken against the extreme censorship that has been pursued for years by the techno-fascists from Silicon Valley.

For the record, we have called for a suspension of all elections until a period of one year has elapsed after free speech is restored in America, arguing that democracy cannot function in a fair and free manner without protections for the freedom to speak, read, post and share. The tech giants have systematically and maliciously targeted conservatives, Trump supporters, Christians and pro-liberty individuals with extreme censorship, and their fraud is so complete that they deny they are engaged in censorship at all.

Key elements of the executive order

– Establishes the fact that tech platforms are the modern-day “public square” in which public debate and free speech must be allowed to flourish.

– Confirms that protecting free speech is “essentially to sustaining our democracy,” which is the exact point I’ve been making recently in articles and videos. We cannot have “fair and free elections” without a free speech landscape. Under the current degree of censorship in America, all elections are null and void.

– States that the politically biased censorship of the tech giants is, “un-American and anti-democratic.” Characterizes Big Tech’s censorship as “a dangerous power.”

– Points out how Big Tech is favoring China and even protecting the speech of communist regimes while censoring the speech of freedom-loving Americans. “Several online platforms are profiting from and promoting the aggression and disinformation spread by foreign governments like China.” See my related article, “Big Tech Goes Pinko” for more details.

Google, for example, created a search engine for the Chinese Communist Party, which blacklisted searches for “human rights,” hid data
unfavorable to the Chinese Communist Party, and tracked users determined appropriate for surveillance. Google has also established research partnerships in China that provide direct benefits to the Chinese military. For their part, Facebook and Twitter have accepted advertisements paid for by the Chinese Government that spread false information about China’s mass imprisonment of religious minorities. Twitter has also amplified China’s propaganda abroad, including by allowing Chinese government officials to use its platform to undermine pro-democracy protests in Hong Kong.

– Establishes that it is the policy of the U.S. government, “that lawful content should be free from censorship in our digital marketplace of ideas. As a Nation, we must foster and protect diverse viewpoints in today’s digital communications environment where all Americans can and should have a voice.”

– Calls for the scope of Sec. 230 of the CDA to be “clarified.” States that the selective censorship and editorializing of the tech platforms causes those platforms to be, “engaged in editorial conduct,” from which they should not enjoy Sec. 230 legal immunity from lawsuits. “such a provider forfeits any protection from being deemed a “publisher or speaker” under subsection 230(c)(1).”

– Calls for all government regulators to apply this strict interpretation to enforcing Sec. 230, meaning that any tech platform that engages in political censorship or flagging of content for reasons related to viewpoints should be subject to civil lawsuits.

– Calls on the  National Telecommunications and Information Administration (NTIA) to file a petition for rulemaking with the Federal Communications Commission (FCC), asking the FCC to clarify Sec. 230 interpretation in a way that would preclude political bias, viewpoint censorship or similar actions on the part of the tech giants.

– Furthermore calls on the FCC to establish rules under which users of tech platforms such as Facebook would have to be given adequate notice and an “opportunity to be heard” so that tech giants can’t merely blacklist entire channels without warning and without explanation.

– Calls for prohibiting all federal ad spending on digital platforms that do not respect this interpretation of Sec. 230 and free speech.

– Calls on “large social media platforms,” specifically naming Facebook and Twitter, to be considered the, “functional equivalent of a traditional public forum” and demands that they, “should not infringe on protected speech.” In this context, the word “protected” implies First Amendment protections.

– Calls on the FTC to “prohibit unfair and deceptive acts or practices” that affect commerce. This is a broad order with potentially enormous implications, especially considering that platforms like Facebook, which censor truthful speech about vaccine risks, for example, is run by people like Mark Zuckerberg who have a financial stake in vaccine companies. Facebook’s censorship of speech that criticizes vaccines is, of course, anti-competitive and antitrust behavior which is subject to prosecution by the FTC.

– Instructs the FTC to crack down on the deceptive promises made by social media platforms (i.e. telling users they are free to speak) while in reality those platforms practice politically-motivated censorship that contradicts their public promises. This constitutes “deceptive practices” which the FTC may choose to prosecute.

– Directs the FTC to consider criminal violations by Twitter and other large social media platforms which are engaging in deceptive and unfair marketing and commerce practices that violate U.S. law. Calls for the FTC to issue a public report about its findings after investigating possible criminal violations.

– Calls on the DOJ to work with Attorneys General of U.S. states to create a “working group” to pursue Big Tech violations of state laws regarding unfair practices and “deceptive acts.”

What’s clear from this executive order is that the fuel which will drive all these processes carried out by the White House, the FCC and the FTC will be user reports of censorship and bias.

In other words, even as Trump is laying out the framework for the federal government to aggressively crack down on censorship and bias by the tech giants, the government won’t be able to get much done without a flood of user complaints.

Thus, we are encouraging all readers to take the following actions:

1) DOCUMENT every instance of censorship, bias, blacklisting and de-platforming that has happened to you or your business over the last several years.

3) PREPARE to submit your complaints to the White House Office of Digital Strategy once a new complaint process is announced and made publicly available. (We don’t know the timeline of this, but Trump appears to be motivated to move quickly).

4) ENCOURAGE all others who have been impacted by the malicious, un-American censorship of the tech giants to take these same actions and prepare their evidence and complaints.

5) SHARE this article if you are able. While Facebook, Twitter, Google, YouTube and other tech giants have maliciously and repeatedly de-platformed my voice and my websites, the following site is co-publishing this story and you may be able to share it from there:

6) MOVE your channels to alternative platforms. Leave Facebook and bring your followers to AllSocial.com. Leave YouTube and bring your videos and viewers to Brighteon.com. Consider the growing ecosystem of other independent platforms.

7) SELL all stocks of Facebook, YouTube, Google, Twitter, Vimeo and other tech giants that engage in speech suppression and malicious censorship. Do not invest your financial future in their model of oppressing basic human rights.

8) CONDEMN those who work for Google, Facebook, YouTube, Twitter, Wikipedia, Vimeo and other malicious censorship platforms for their complicity in empowering evil, authoritarian regimes that crush human freedom and censor important human rights voices like Jennifer Zeng. Today, anyone who works for the tech giants is morally no different than someone who worked for the Nazi regime in 1939, for example.

9) SUPPORT the efforts of Sen. Josh Hawley and Rep. Matt Gaetz for their passionate efforts to revoke Sec. 230 protections from the tech giants and restore a level playing field of free speech for America. Tell your representatives in Congress that you demand the revocation of Sec. 230 and a new law to protect free speech across online platforms.

10) VOICE YOUR SUPPORT for President Trump’s actions to defend the free speech of all Americans. Thank Trump for this decisive action and encourage him to pursue it with courage, even if the stock prices of the tech giants fall. There is no greater and more important fight for our future than the fight to defend the First Amendment and your right to speak without interference by malicious, communist-infiltrated corporations like Twitter and Facebook. President Trump is taking bold action, and he desperately needs our encouragement and support to see this through.

If President Trump doesn’t win in November, free speech will be obliterated in America for generations to come

Finally, realize that if President Trump loses the November election, a Democrat president will reverse all this and allow the tech giants to pursue an endless, aggressive expansion of malicious censorship. That will no doubt end either in mass genocide or an armed uprising and civil war across America. Neither outcome is good for our future.

It now appears that the political survival of President Trump in the upcoming election is, indeed, the only path by which the free speech of the American people can be restored.

Here’s my take on why the tyranny of Big Tech must be brought to an end.