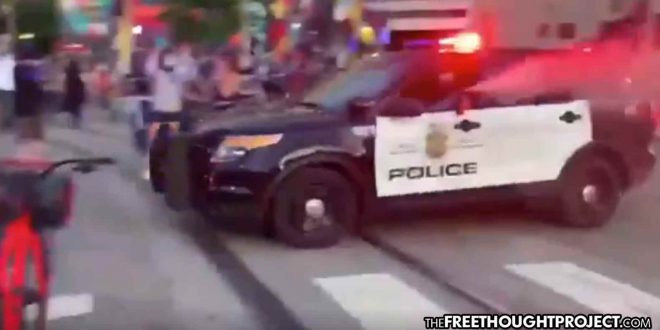 Minneapolis, MN — It’s been five days since police were seen on video murdering George Floyd while he was in handcuffs on the ground. Though the officers were fired, not a single one of them has been charged with a crime. The anger directed toward the Minneapolis police department is real, vast in scope and entirely justified. While the destruction of private property is not at all condoned, it is not hard to see where it comes from.

As my father explained during his lifetime, a riot is the language of the unheard.

To be clear, the overwhelming majority of protesters in Minneapolis are peaceful and are there to practice their First Amendment right to voice their anger at the fact that cops can murder people on video, and instead of get arrested, they get a platoon guarding their home.

Damn… Instead of arresting Derek Chauvin for murdering George Floyd, 200 cops are being paid by tax dollars to protect him and his house. Yes, innocent until proven guilty, but he should already be charged and arrested, yet he was not. This is why people burn shit. https://t.co/qtgzQWiW7M

This disparity between the police and the ones they are supposed to serve is utterly shocking — not surprising, but shocking. Instead of seeking justice for a murder that took place in front of multiple witnesses and on video, police circled the wagons and the protesters became the enemy. They are being backed into a corner and like anyone who is put in that position, they are reacting with fight or flight.

If you want to know what may provoke someone to begin destroying police property, the video below may serve as an answer. It shows cops speeding through protesters — who appeared peaceful at the time — and spraying them with pepper spray from the window.

While we never advocate for any unprovoked attacks on property, it would be inaccurate to state that the attack on the Minneapolis police department was unprovoked.

As noted above, the anger these rioters feel is real. While many Americans are able to sit behind their computer screens and TVs and watch this unfold, the folks in Minneapolis have been pushed to a breaking point. People are tired of watching cops kill unarmed and often innocent people only to keep their jobs and pensions while the taxpayers of these cities take the brunt of the responsibility.

For decades there has been a perfect storm brewing in this country as minorities and poor people have their doors kicked in and are terrorized by cops during botched raids for substances deemed illegal by the state and watch helplessly as their family members die in video after video at the hands of cops. Now, we have record unemployment, lockdowns, cops murdering people on video and facing no immediate charges, and those in charge sit at the top and point fingers.

So, why we would never condone the destruction of private property to make one’s point, we understand the anger and helplessness felt by those who would.

Sadly, however, the destruction to property and senseless violence will undoubtedly sway people away from the much needed anger directed at the system that led to the death of George Floyd. The very small group of people responsible for this destruction will be used to discount the entire peaceful nature of the rest of the protests.

This is tragic and unfortunate because Floyd’s death, while similar to so many other police killings, received a response from all sides like never before.

In one of the most incredible connections of the two-party divide we’ve ever seen, Floyd’s death enraged not only the Black Lives Matter folks and the left — who are always willing to go to bat for those killed by police — but conservatives, who consistently apologize for killer cops, had finally taken a stand as well. For once, Americans were becoming united in the face of police brutality and it was crossing party lines.

A united front of people pushing for government and police accountability would be an unstoppable force for good. Perhaps that’s why there are so many people attempting to thwart this unity.

Hopefully, the destruction of property in Minneapolis does not serve as a snooze button on the alarms of those on the right who’ve finally awaken to the standing army our forefathers warned us about. Do not let the actions of a few prevent you from seeing the bigger picture that the American law enforcement system is broken.