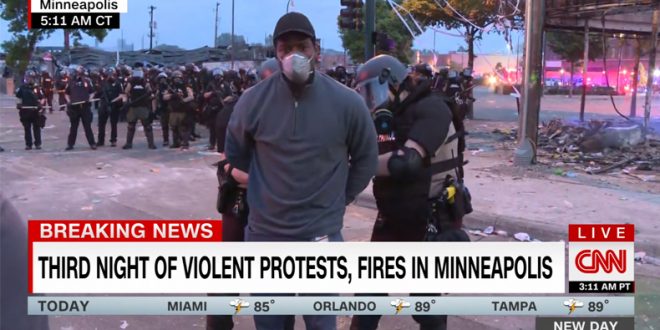 (ZH) Millions of Americans feel like the country is drifting precariously close to the point where social cohesion unravels. What’s the Minneapolis PD’s solution? Arrest a team of journalists live on air…

The same police department that hired the officer who cruelly and arbitrarily murdered George Floyd has responded to the intensifying media coverage of the riots that are now beginning to spread across the US with what some might describe as ‘Stalinist’ tactics.

CNN tweeted a photo of reporter Omar Jimenez being taken into custody in the middle of the live report.

This video was captured by the crew while they were being arrested.

A CNN crew was arrested while giving a live television report in Minneapolis, where the crew was covering ongoing protests over the death of George Floyd. They had clearly identified themselves as press. https://t.co/QklqlJm7mD pic.twitter.com/0xreuTPuWS

According to CNN, police told the crew they were being detained because they were told to move, and didn’t, one member of the CNN crew relayed to the network. In a statement, the network accused the police of arresting the men for doing their jobs.

A CNN reporter & his production team were arrested this morning in Minneapolis for doing their jobs, despite identifying themselves – a clear violation of their First Amendment rights. The authorities in Minnesota, incl. the Governor, must release the 3 CNN employees immediately.

Jimenez could be seen holding his CNN badge while reporting, identifying himself as a reporter. He could be heard telling the officers that they would move wherever the police needed them, while also making it clear that he was in the middle of a live report.

An officer gripped his arm as Jimenez talked, then put him in handcuffs.

“We were just getting out of your way when you were advancing through the intersection,” Jimenez said.

CNN’s Josh Campell was nearby but was allowed to remain.

“I identified myself…they said, ‘OK, you’re permitted to be in the area,’” recounted Campbell, who is white. “I was treated much differently than (Jimenez) was.”

Jimenez and the crew had been reporting from the site, which was near a police precinct that was burned down by protesters overnight.

Courtesy of Zero Hedge via The Free Thought Project