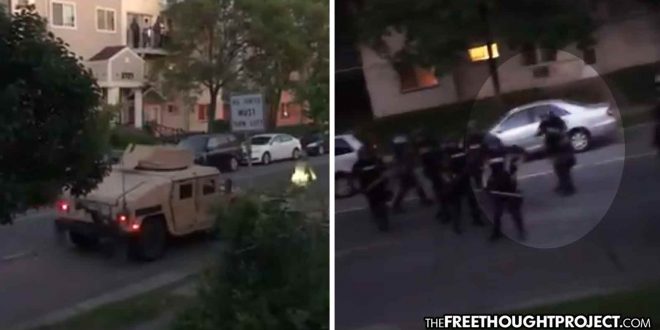 Minneapolis, MN — Utterly horrifying video was just submitted to the Free Thought Project showing police and National Guard patrolling a neighborhood in Minneapolis and opening fire on people standing on their porch.

Several innocent people were standing on their front porch filming Humvees rolling down the street that were followed by dozens of troops on the ground. The troops were yelling at residents to “get inside!”

As the innocent people stood on their own property, someone in the group of troops gave the order to “light em up!”

The troop or cop then turned toward the group of people filming and opened fire. The people then ran inside and appeared to dust off debris, possibly from a ricochet.

This is not acceptable.

This week the Mayor of Minneapolis locked down the entire city, shutting down all public spaces. The order reads as follows:

Whereas, on May 25, 2020, George Perry Floyd died while in the custody of the Minneapolis Police Department in the City’s 3rd Precinct; and
Whereas, in the aftermath of the killing of Mr. Floyd, a civil disturbance has occurred within the 3rd Pct. and surrounding areas with resulting damage to people and property, including several businesses and buildings that have been significantly damaged, looted, or burned; and
Whereas, in the aftermath of the killing of Mr. Floyd and the resulting civil disturbance, public safety personnel, residents, and visitors have been and remain at risk of significant injury and death and the potential for further civil unrest or disturbance is to such an extent that extraordinary measures must be taken to protect the public health, safety, and welfare; and
Whereas, much of the destruction and violence has taken place under the cover of darkness; and
Whereas, as a result on May 28, 2020, I declared a Local Emergency pursuant to Minnesota Statutes, Section 12.29, and Minneapolis Code of Ordinances (MCO), Section 128.50; and
Whereas, MCO Section 128.50 vests the Mayor with the express authority to take certain actions pursuant to such emergency declaration, including the ability to impose curfew hours on public streets and other public places; and
Whereas, pursuant to the emergency declaration, the Mayor is authorized to promulgate emergency regulations pursuant to MCO Section 128.60 to protect the public health, safety, and welfare.

The order describes a public place as follows: For purposes of this emergency regulation, “public place” means any place, whether on privately or publicly owned property, accessible to the general public, including but not limited to public streets and roads, alleys, highways, driveways, sidewalks, parks, vacant lots, and unsupervised property.

By their own definition, these folks were on their own property and not at all in a public place. Nevertheless, even if they were in a public place, this does not give the police or military the right to open fire on innocent people filming.

In a matter of days since the murder of George Floyd, parts of the US have slipped slowly into a state of Martial Law — regardless of whether or not it was officially declared. When police and military are patrolling the streets and opening fire on innocent people, it is time to start paying attention.

These patrols will not get the result that government desires. Videos like the one below will only serve as a catalyst for future resistance. As you watch the video below, ask yourself this question, are these military and police personnel seeking peace…or provoking a civil war?

Also in today's criminal justice news, National Guard and Minneapolis PD officers illegally demand taxpayers stop filming from their porch and go inside – you'll hear "Light 'em up!" as they then shoot at these people *WHO ARE ON THEIR OWN PORCH*