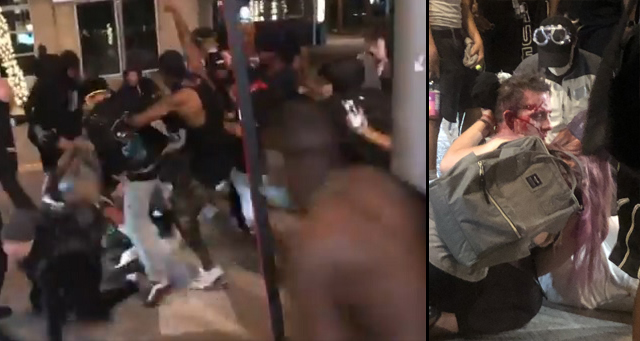 Rioters in Dallas were filmed savagely beating a white man in the street while shouting racial epithets on Saturday night.

Looters ran at him, then he charged rioters

I called an Ambulance and it’s on the way pic.twitter.com/kFxl3kjsBC

Full unedited video for editorial requests. Please attribute to Elijah Schaffer of Blaze TV. I cannot confirm he was the store owner, but I pulled out my camera when I saw him appearing to defend a store, then he was rushed, then made the move that might have cost him his life pic.twitter.com/8oGa2obBbp

UPDATE II: New video shows the mob went in to rob their victim after stoning him and beating him to the brink of death.

Another video of the man who was beaten and stoned in Dallas. Still want to pretend he was the aggressor? pic.twitter.com/VS3DuS6YDm

You can see the man at 0:36 in both videos went in to steal the victim’s wallet / cell phone. Video shows the mob viciously beating the man and kicking him in the head while he’s on the ground.

The mob can be heard cursing him as they pummel him relentlessly.

One of the attackers can be heard shouting, “Fuck you nigga!”

The man’s mangled body, twisted and contorted is seen bleeding out on the street as the killers flee the scene.

Schaffer said it appears the man “attempted to defend a shop with a large sword.”

He said he was “critically injured.”

Damnit man this is getting really bad out here

Situation is critically out of control pic.twitter.com/vWBdnVK3jQ

Schaffer reported that some of the mob “laughed at him” and “continued to loot high end stores around him while he bled out” in the street.

Some people were concerned

Others laughed at him

Here is the critically injured man being tender to by volunteer medics pic.twitter.com/Jxahufu66B

“It’s getting too risky out here,” Schaffer said in a follow-up tweet. “This is a riot … Police are nowhere to be seen.”

It’s getting too risky out here

Ive never said this at a protest

This is a riot

Police are nowhere to be seen

Destroying everything they can

The city of Dallas mourns as it falls apart tonight pic.twitter.com/4fIICUCtoj

It’s not clear yet whether the man has died.

UPDATE: Dallas Mayor Eric Johnson says the man was taken to a hospital and is still alive.

[This article was updated to reflect the possibility the man survived.]