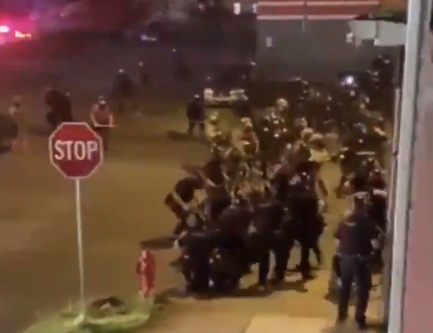 Video posted to Twitter shows a dark sedan accelerating towards the officer at the intersection of East 170th Street and Walton Avenue in Mt. Eden, striking his body and sending him flying through the air into the middle of the intersection, according to the New York Post.

I had to trim the video but broooo nights got into the pawn shop n then bruh this is fucking wild pic.twitter.com/mAj02ttIFD

The officer landed in the middle of the intersection and several other people, presumably officers, rushed over.

An NYPD van with its sirens flashing then pulled up and the injured officer was escorted into the vehicle.

A shocking scene has unfolded Monday night from the streets of Buffalo, New York as police attempted to clear rioters and presumably looters from a city street.

Video captured from a protest live feed shows a car plowing into a large group of police and what appear to be state troopers, and SWAT or possibly national guard soldiers.

Just happened: a protest in a car run over a group of cops in Buffalo NY…Some of them might be dead

The group of police are seen initially clearing the street with weapons drawn, and gunshots are heard in the background in an intensifying situation.

Suddenly the group of police attempt to jump out of the way as what appears an older model SUV rushes straight into the group.

Another angle to the attack shows the car gaining speed as officers realize it’s headed straight for them, most dashing out of the way at the last moment:

BREAKING: A trooper and an officer were hit by a car that blew through a line of officers at the protest on Bailey Avenue according to PBA President John Evans. They were taken to ECMC. Stay with @SPECNewsBuffalo for updates. #Buffalo pic.twitter.com/odQygo09lH

At least one officer is directly crushed under the vehicle in the graphic footage, and it appears multiple are down, with others rushing to aid and pull them from the street.

AP has confirmed the video, with White House correspondent Zeke Miller writing, “Video shows SUV plowing into officers at Floyd protest in Buffalo, New York, running over at least 1, then speeding away.”

The group of clearly rattled police then attempt return fire as the vehicle rushes away from the scene. It’s unclear if the driver was apprehended.

Though there was no initial confirmation of the horrific and clearly intentional attack on police via Buffalo Police social media accounts, the footage is now going viral.

The man who took the original video from a nearby balcony, who appears to be Yemeni-American based on the Facebook page hosting the live feed, expresses disbelief in Arabic and utters a prayer.

BUFFALO, N.Y. (AP) — Video shows SUV plowing into officers at Floyd protest in Buffalo, New York, running over at least 1, then speeding away.

The attack happened at the corner of Decker Street and Bailey, across from an Autozone which is partially seen in the video.