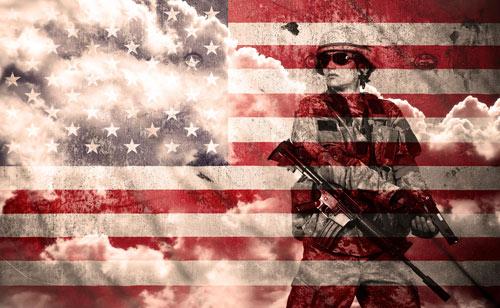 During the time of our Founders, it was clear who was threatening the life, liberty, and property of Americans.

When King George’s assaults on American liberties increased, American Richard Stockton sided with the Americans and was chosen as a delegate to the Continental Congress, where he signed the Declaration of Independence as a representative for New Jersey.

Stockton was then kidnapped from his home by neighbors who were Loyalists (Americans who supported the King of England). He was “dragged from his bed by night, stripped and plundered of his property” and “treated with the utmost rigor and indignity.” He was placed in a notoriously brutal prison in the middle of winter and was denied even the basic necessities.

While imprisoned, Stockton’s library, papers and other property were burned or destroyed, and his farm was left desolate and inoperable. As a result of his cruel treatment, Stockton died in 1781, never getting to experience the national freedom for which he had sacrificed so much.

On Memorial Day we celebrated those like Stockton, who courageously faced America’s enemies. Yet, I can’t help but wonder if this day of remembrance is being overshadowed by an invisible enemy?

What if the present lockdowns, the mandates, the orders, the gross misuse of police powers, and everything that has ruined the livelihoods and trampled the liberties of millions of Americans was the result of a foreign invasion?

James Wilson, who was a Founding Father, Declaration signer, and Supreme Court Justice, said, “Without liberty, law loses its nature and its name…”

Suppose an enemy army invaded and occupied your state, enforcing house arrests along with inconsistent, arbitrary, and self-contradictory orders.

Would this alter your opinion of what is going on today?

Would this alter your approach, your response?

Would you be less apt to accept assertions that this is for your own good and for your safety?

I would like to pose a simple yet potentially controversial question:

Whose advice have the stalwart shutdown governors been following?

Or have you noticed them following the globalist agendas of the World Health Organization, aligned with internationalists like Fauci and Gates, and in collusion with other foreign governments?

Make NO mistake, these organizations and systems of government are foreign to the American Constitution, American ideals and American principles, including the integrity of the American family and the sanctity of the House of God.

Under these foreign directives, in many instances, our healthcare has become essentially “weaponized” and has annihilated a once robust and efficient hospital system as well as a once robust economy that helped to make that system possible.

I pray God blesses every American soldier, veteran, and citizen who exercises Patriotism against any and all enemies of America, for in the words of General Douglas MacArthur:

“No man is entitled to the blessings of freedom unless he be vigilant in its preservation.”