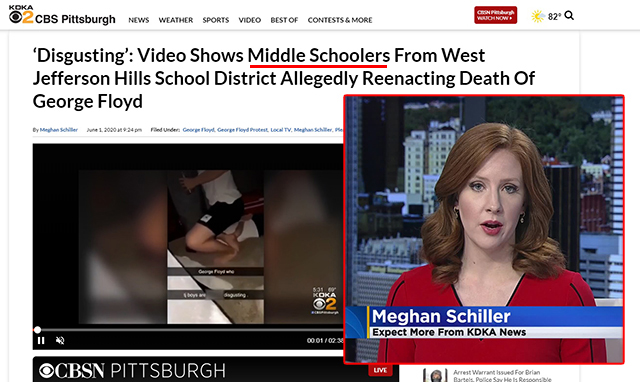 CBS Pittsburgh’s KDKA is helping lead a social media mob to go after two middle schoolers and even contacted police over the kids making a joke reenactment of George Floyd’s death with their friends.

The little kids were also targeted for destruction by 25-year-old Steelers running back James Conner, a millionaire who shared the video to his 420,000 followers. This rich millionaire NFL player thinks he’s oppressed by some random white middle school boys because they made a politically incorrect joke.

Meanwhile, he’s being hailed as some sort a hero while the middle school boys are being reported to police for a joke and harangued by the political establishment.

The kids were also doxed on social media and their home addresses were widely shared so they could be inundated with death threats.

In the minds of our parasitic ruling class, these little kids are evil oppressors yet the grown ass men rioting in the streets are innocent victims just by nature of their race.

These are sick, demented people and Meghan Schiller should be absolutely ashamed of her disgusting and despicable behavior.

KDKA’s Meghan Schiller shared the video on social media (and KDKA aired it above) without even blurring the kids’ faces:

Tonight on @KDKA: Police are investigating & a demonstration is happening after this video circulated on social media. Police say it shows 2 middle schoolers from West Jefferson Hills SD mocking the death of #GeorgeFloyd #GeorgeFloydProtests pic.twitter.com/rB8zXK4KHh

“Why the hell are you spreading this?” one outraged Twitter user responded on social media. “Have you lost your minds @KDKA?”

“I have never been more disappointed in a news organization. Holy crap! Shame on you!” he said.

Why the hell are you spreading this? Have you lost your minds @KDKA I have never been more disappointed in a news organization. Holy crap! Shame on you!

Leave the kids alone. Come on.

KDKA has hit a new low.

Our entire political class has absolutely lost their minds.

The media is leading lynch mobs against middle schoolers as though they’re “evil oppressors” while simultaneously running propaganda in support of violent rioters that are shooting cops in the back of the head, running them over with SUVs, beating people in the street, setting fires to residential homes with children inside and blocking firefighters from responding, burning down $30 million affordable housing complexes and looting all over the place.

This isn't journalism. This is activism. This is excusing arson, looting, rioting, and the destruction of minority-owned businesses.

CNN is literally endorsing rioting. You can’t make this stuff up. They’re actually full on endorsing riots and fanning the flames of hate + racial division. @ChrisCuomo should be ashamed for perpetuating a black vs. white race war narrative. This is CNN. Sickening. pic.twitter.com/r0WuTRJXrE

No wonder folks call them “the enemy of the people!”

UPDATE: Schiller deleted her tweet of the boys’ video on Tuesday night without making a statement. KDKA’s video and Schiller’s article targeting the middle schoolers remains up.