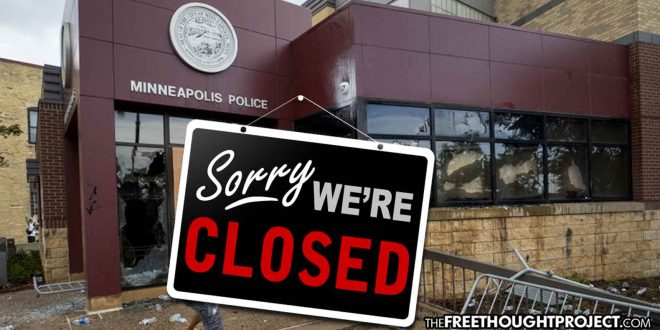 Minneapolis, MN — After a massive uprising in Minneapolis, Minnesota that subsequently spread to nearly every state in the country, significant change appears to be on the horizon. Several city council members in Minneapolis are reportedly in talks to disband the Minneapolis Police Department. This would be a revolutionary move to affect positive change and allow the city to start over with a police force designed around public safety instead of predation and extortion.

“Several of us on the council are working on finding out, what it would take to disband the MPD,” says Steve Fletcher, a member of the 13-person assembly that serves as the legislative branch of Minneapolis government, according to Alpha News Minnesota.

The talks over disbanding the police department come just days after one of the most chaotic weeks in American history that left many parts of Minneapolis and other cities burned to the ground and heavily damaged. All of the chaos stemmed from a single flash point when officer Derek Chauvin put his knee on the neck of George Floyd and kept it there until he died.

It took several days for Chauvin to be arrested. In fact, as the riots raged on, instead of arresting him, dozens of cops protected him in his home.

Damn… Instead of arresting Derek Chauvin for murdering George Floyd, 200 cops are being paid by tax dollars to protect him and his house. Yes, innocent until proven guilty, but he should already be charged and arrested, yet he was not. This is why people burn shit. https://t.co/qtgzQWiW7M

What’s more, none of the other officers who either helped hold Floyd down or failed to stop a murder in progress have been arrested. It was only announced on Wednesday that they are “facing charges.” This shows just how corrupt and complacent the department has become.

“It became clear by day two that people were marching for much more than that – the response to George Floyd’s death needed to be much more than any prosecution could offer. What people in the streets have won is a permanent, generational change to the mainstream view of policing,” Fletcher said of the uprising’s success.

The talks could last for some time as the council hasn’t figured out exactly what disbanding the police department would look like yet. Fletcher did mention that its replacement would be community-oriented, however.

“I don’t know yet, though several of us on the council are working on finding out, what it would take to disband the MPD and start fresh with a community-oriented, non-violent public safety and outreach capacity,” Fletcher wrote.

Fletcher blames the president of the Minneapolis police union for the violence as well, saying, “I don’t want to focus too much on Bob Kroll because he’s a symptom of a much deeper problem in the Minneapolis Police Department, but it’s worth saying that he’s a malignant presence in our city and should resign.”

Fletcher went on to point out the massive problem of law enforcement’s only tool — violence. As TFTP has noted repeatedly, when your only tool is a hammer, everything starts to look like nails.

“After watching MPD officers escalate and provoke anger all week, he asserts that if they’d only been allowed to use more violence, they could have put a stop to demonstrations. This is nonsense. MPD officers chose him as their leader,” he said.

As the Star Tribune reports, the Minneapolis Public School board voted unanimously Tuesday to terminate the MPD’s contract to provide school resource officers. The district will cease further negotiations with the department and Superintendent Ed Graff must come up with a new plan for school safety by the board’s Aug. 18 meeting.

“I value people and education and life,” school board chairwoman Kim Ellison said in an interview. “Now I’m convinced, based on the actions of the Minneapolis Police Department, that we don’t have the same values.”

“I firmly believe that it is completely unnatural to have police in schools,” school board member Kimberly Caprini said during the meeting.

And she is right. As frequent readers of TFTP know, school cops are constantly in the news for beating, maiming, and kidnapping school children over petty issues that could be handled with detention or nothing at all.

Also, if you think disbanding the police department would send the city into chaos, think again. TFTP has reported on numerous cases which show the opposite is true, illustrating that most policing carried out in the United States is done so for the purpose of revenue collection and not to fight crime.

Drug offenses, parking violations, and traffic citations are not so much crimes, as they are streams of revenue for the city. They are also the reason for the majority of police harassment within particular communities.

Imagine a police force that acted more like firefighters or EMTs. Firefighters don’t have to go door to door looking for fires, in order to be effective. EMTs, just like firefighters wait for a call before reacting and their services are often proven invaluable contrary to that of police work. Perhaps this recent chaos can be used to channel this notion to the forefront and completely revamp the idea of policing in the land of the free. We can only hope that this comes sooner than later. To see how you can help to make it come sooner, click here.