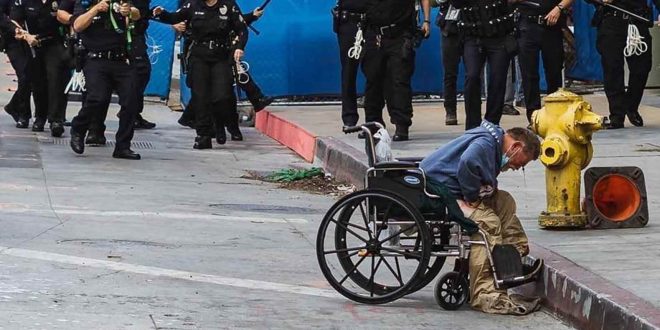 Los Angeles, CA — A common theme is starting to appear across all the stories of police violence against protesters in the past week. That theme is that the protests remain largely peaceful until police begin kettling protesters and attacking them with rubber bullets and tear gas. Multiple instances of protests turning violent all appear to have the same catalyst behind the violence — cops acting as the instigators. As the following case illustrates, even when the cops try to instigate a fight, up to and including shooting a homeless man in a wheelchair, people resist the urge to get violent.

There has been a lot of looting and destruction in Los Angeles since the start of the protests last week. However, on Tuesday, protests remained entirely peaceful. This was in spite of the fact that cops opened fire on protesters with rubber bullets and doused them with tear gas.

Dozens of peaceful protesters were documented trying to seek cover from the fire as cops shot them with “less than lethal” projectiles for being out past curfew.

It is important to point out that many of the arrests we are seeing involve violations of unconstitutional curfews which have been enforced across the nation — not actual crimes. When citizens refuse to be silenced and do not go home when told they have to, police begin a process known as kettling which provokes violence by trapping protesters in a fight or flight type situation.

Essentially, people who stay out past the curfew are being kettled by cops who do not allow them to leave and then are tear gassed, pepper sprayed, beaten with batons, and then arrested.

This tactic is highly controversial because multiple instances have captured cops abusing people who are innocent, including the press, and bystanders who are not even participating in the protests — like innocent homeless people in wheelchairs.

According to a report out of the LA Daily News, officers were enforcing the curfew in Los Angeles when they opened fire on peaceful protesters. Caught in the fire was an innocent homeless man who was shot right in his face with a rubber bullet. As seen below, after being shot, the man slumped over in the wheelchair and began bleeding profusely.

DTLA earlier: “completely unarmed homeless man in a wheelchair that had NOTHING to do with our protest.” “They proceeded to inappropriately shoot “non-lethal” rounds directly at his face, which is against the proper procedure for firing rubber bullets.”

DTLA earlier: “completely unarmed homeless man in a wheelchair that had NOTHING to do with our protest.” “They proceeded to inappropriately shoot “non-lethal” rounds directly at his face, which is against the proper procedure for firing rubber bullets.” pic.twitter.com/MMdEkutgCx

As the Daily News reports:

Officers and then paramedics tended to the man, but his condition was unclear. LAPD spokeswoman Officer Rosario Cervantes said Wednesday the department had no comment on the incident at this time. A photo of the man and his injury was being reviewed by the department.

This happened on Tuesday and is so egregious, so over the top and despicable that it should be on the front page of every major outlet. However, there are literally so many stories like this one, that it is impossible to break through the divisive chatter in the mainstream.

As we reported on Friday, for example, 13 days ago, if cops were recorded conducting a drive-by shooting at kids walking down a sidewalk in their neighborhood — allegedly enforcing a 7:00 p.m. curfew — this would be a national conversation. Instead, it’s been reduced to a blurb in local media and buried by countless other stories.

According to witnesses, the following footage was taken in the area of Fountain and Highland avenues in Los Angeles.

In the video, we can see a deputy with the Los Angeles County Sheriff department leaning out the window in a “drive-by” fashion before opening fire on a group of teens on the sidewalk.

We have no way of knowing what transpired prior to this shooting. However, nothing the officers are doing is within department policy.

As the group of teens turns and runs, pepper balls are seen exploding on signs and cars before rubber bullet gun shots can be heard. It was a scene out of a dystopian fiction, but it was real and happened in the land of the free.