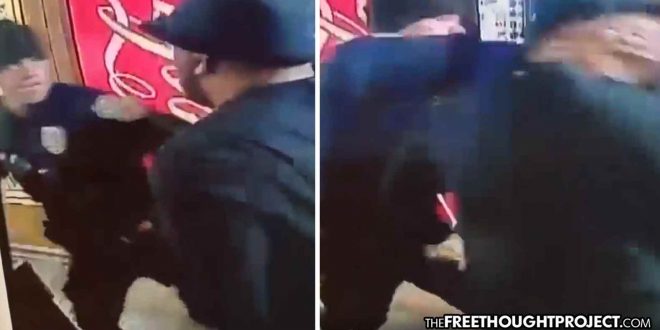 Decatur, AL — On the night of March 15, 2020, Kevin Penn, 47, owner of Star Spirits & Beverages in Decatur, Al. was robbed. So, he did what society tells him to do — he called 9-1-1. Unfortunately for Mr. Penn, however, like so many calls before his, asking police for help was the worst decision he could’ve made because when cops showed up, they broke his jaw, knocked out several teeth, and arrested him.

On that fateful night, Penn, who is a lawful gun owner and esteemed businessman, informed police that he had used his gun to capture the robber and was holding him at gunpoint until they get there.

The suspect was reportedly white and Penn is black. Apparently this confused officers when they arrived.

Decatur police Chief Nate Allen said when officers arrived they thought Penn might be the suspect. Instead of conducting any actual investigation, however, cops rushed him, punched him in the face so hard that it broke his jaw, tackled him to the ground, and arrested him.

As the video from inside Penn’s store shows, when police arrived, Penn waived them inside. He then removed the magazine from the pistol, put the pistol down on the counter and began unloading the magazine to show cops he was not a threat and to put them at ease. Since he was a black man, he knew the propensity of violent cops to immediately escalate to deadly force, so he thought he was doing the right thing.

The fearful cops, on the other hand, misunderstood the situation and began beating Penn.

The video was uploaded to Facebook Monday night showing the savage attack, and posted with the following caption:

Look how these officers from Decatur Police Department treated a local business owner! He called to inform them of him getting robbed and they end up breaking his jaw… They attacked the wrong individual! They allowed the ROBBER to walk away because he was a white MALE! This is what takes place when you just run in without evaluating the situation

Chief Allen claimed Penn was loading the pistol, but this was not true. As the video shows, he was unloading it.

“The officers didn’t see that,” Allen said. “The only thing they saw when they got there is the gun on the counter and he had something still in his hand, and he said ‘I’m not going to put my gun down,’ so that gives the impression to the officer that he still has a gun in his hand.”

During the press conference, Allen made a telling admission.

“I would much rather have a punch than an officer-involved shooting,” he said.

Reread that quote from the chief of police again and think about what that means. He’s essentially saying Mr. Penn only had two possible outcomes when he called 911 — the responding cops would either kill him or beat him and beating him was the better outcome, so that is what they did. This is the state of policing in America.

Allen then went to blame Penn’s broken jaw on the victim.

“I was always taught to abide by a police officer,” Allen said. “If a police officer tells you to do something that was legally and morally correct, then you are to do it – especially when it comes to weapons.”

The attorney representing the store owner released the following statement which does a far better job at explaining the situation than the official police narrative. It also shows just how corrupt the police department is, as they have kept the body camera footage secret, despite a pending criminal case against Penn:

“In early April, we turned over security cam footage to the DPD. They have had it for over 2 months. Today is the first we have seen of any body cam footage and the first we have have heard of the status of the officer that broke Mr. Penn’s jaw. I doubt we would be having this conversation today, but for the outcry on social media.  The audio and video, released today for the first time, fully supports what Mr. Penn told me.  He waived the officers in.  He unlocked the door to allow them to enter.  He unloaded the gun, by removing the clip and ejecting the round from the chamber.  He placed the gun on the counter.  Before he was struck he placed the clip on the counter.  He did this, he told me, because ‘as a black man he felt like he was making himself safer and would make the officers feel safer,’ yet he was met with the officer’s service weapon in his face. He did not threaten the officers. The gun was already put down before he was told to put the gun down.  He was moving away from the gun pointing his finger at them saying he would file a complaint when he was struck. Like Chief Allen, I am also grateful that no one was shot, but I refuse to believe that the only two possible outcomes in this circumstance are getting shot or getting beaten.”

Below is the press conference and police body camera video.