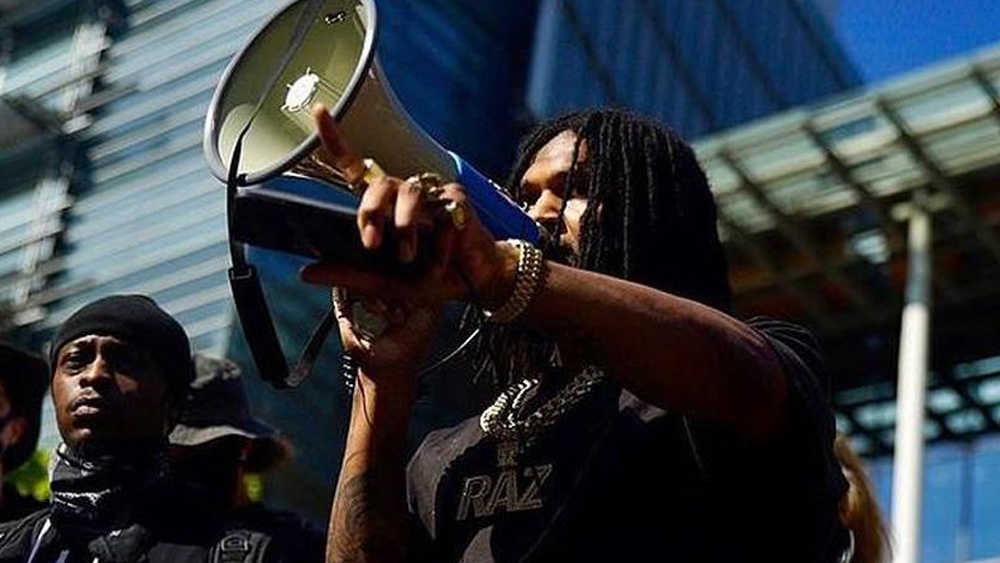 (Natural News) After left-wing terrorists seized six city blocks of downtown Seattle, declaring it an “autonomous zone” that defies all the laws of Washington State and the United States of America, the power vacuum didn’t last very long. Now, an actual warlord has risen to power there — since Democrats hate police, remember? — and according to online comments, he’s, “a man who beats women, forces them into sex work and punishes them if they do not obey.”

A Seattle rap artist appears to be establishing his authority as the de facto “warlord” of a self-styled leftist state in the city’s downtown. Reports from the scene of the Capital Hill Autonomous Zone indicate that Raz Simone, a Seattle rapper, has increasingly staked himself out as something of an authority figure within the jurisdiction. Witnesses describe Simone as asserting his authority over graffiti artists that attempted to paint over existing graffiti, threatening to shoot the street artists if they failed to obey his commands regarding new graffiti.

This is the new rule of law in Democrat-controlled cities, and Governor Inslee has today declared that he has no knowledge that six city blocks in downtown Seattle were seized. Democrats are suddenly learning what happens when you don’t say “no” to Black Lives Matter protesters who seize buildings (or city blocks) and issue a list of demands. As long as you allow the terrorists to control everything, they will keep asking for more.

Imagine their surprise when they escalate to seizing the state capital building and come to find out the Democrats have already looted everything. There’s nothing left to loot!

Hey white libtards living in Seattle, bow down to your new leader. When you demanded abolishing the police, this is what you get instead:

ANTIFA operatives describe seeing Simone assault individuals present within the autonomous zone at least two times. One claimed that he is “becoming the very thing people didn’t want to begin with.”

Video footage of the incident seems to have been caught on camera. Chaz appears far more willing to engage in the use of force than many of the American police the Seattle leftists are pointing to as their oppressors.

The Capital Hill Autonomous Zone, world's most ambitious anthropological experiment, has received its first warlord. Took only one day for the "monopoly on violence" to be discovered… what will happen next? pic.twitter.com/eFWlQPSumd

I am exposing a man who beats women, forces them into sex work and punishes them if they do not obey. Brb. And yes, @RazSimone, I’m talking about you.

Meanwhile, homeless people who were invited to CHAZ stole all of their food. Antifa are calling for vegan supplies

72 hours after the establishment of the #CapitalHillAutonomousZone, there are apparently already food shortages. pic.twitter.com/HBlCynDQYH

All isn’t lost in the republic of CHAZ, however, as the group has apparently organized its own trash collection while hosting regular free speech circles, according to the New York Post.

Inhabitants of the “CHAZ” are calling for defunding the Seattle Police Department as well as other demands published in a 30-point list online.

“This is no simple request to end police brutality,” organizers wrote. “We demand that the City Council and the Mayor, whoever that may be, implement these policy changes for the cultural and historic advancement of the City of Seattle, and to ease the struggles of its people.”

They continue, “This document is to represent the black voices who spoke in victory at the top of 12th & Pine after 9 days of peaceful protest while under constant nightly attack from the Seattle Police Department.” -New York Post

Sadly, Gov. Jay Inslee (D) has no clue about the autonomous zone whatsoever.

"That's news to me". pic.twitter.com/L3LT86Zxgq

So, the governor of Washington doesn’t know that a six-block area, in the largest city in his state, was seized by Antifa after driving the police and National Guard out following a violent confrontation Sunday night.

What else is news to you, @GovInslee?

Or do we even want to know?

Watching black-privileged warlords take over downtown Seattle is endlessly entertaining, and we should encourage Trump to avoid intervening and giving the lunatic Left a new narrative of “oppression.” Instead of sending in the National Guard, just let Seattle Democrats stew in their own s##t for a week or two, just to experience a taste of their own “utopia.”

Let them oppress themselves and burn their own cities to the ground.

Let the Democrats in Seattle experience a week or two under the rule of a woman-beating warlord, completely absent any police response or police accountability.

Let them find out what happens when you give up your right to arm yourself in self-defense, only the find yourself surrounded by violent gang bangers while your elected Governor (a Democrat, of course) pretends the whole thing isn’t actually happening.

Let them see with their own eyes what happens when you abandon the rule of law and allow deranged groups of thugs and hoodlums to seize control over society while making demands for reparations and the abolishing of police.

This is a teachable moment for America, and we should all watch and observe how this chaos unfolds in Seattle (and now spreading to Portland) because this is a sign of things to come if Democrats gain political power.

If you love being ruled by violent, black warlords who reject society’s laws and declare themselves to be dictators, vote Democrat at every opportunity.