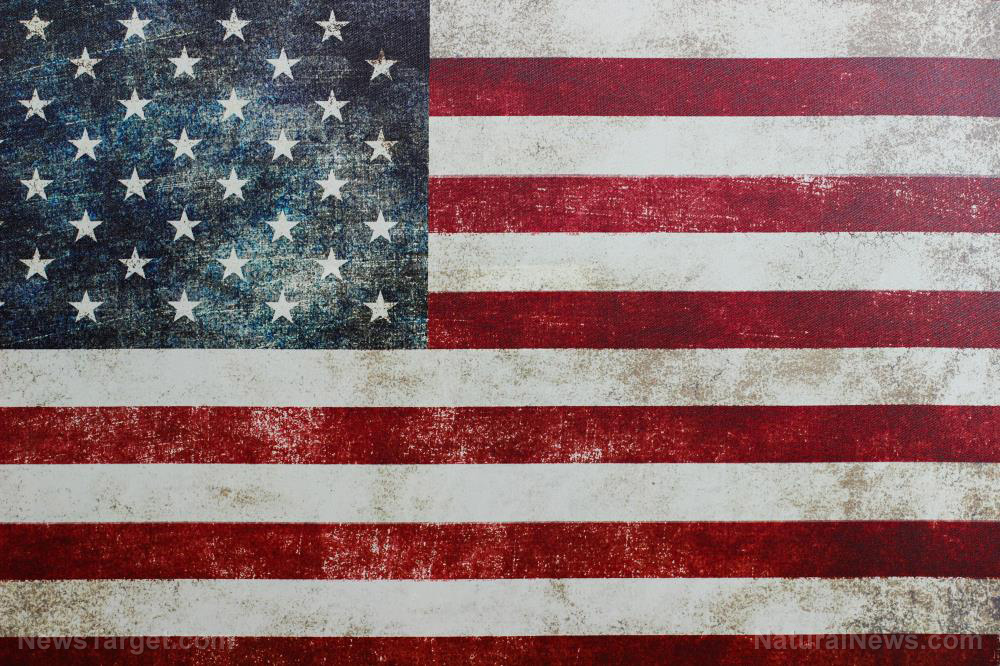 The rise of Black Lives Matter terrorism and their seizing of downtown Seattle through the use of violence, demands a law-and-order response. But the feckless Mayor of Seattle kowtows to the terrorists, and the Governor of Washington is a Soros-controlled left-wing puppet who relishes in the idea of America being destroyed.

The police have surrendered the territory, and the National Guard has been literally disarmed and ordered to stand down, even as left-wing rioters set fire to buildings and hurl chunks of concrete as deadly weapons, now injuring hundreds of law enforcement officers nationwide.

When the mayors and governors won’t do their jobs, and the police are ordered to stand down, and the National Guard is disarmed in order to appease a group of Black Lives Matter / Antifa terrorists who are burning America’s cities, the U.S. Constitution allows for one final defense against tyranny, violence and terrorism: The Second Amendment.

The Second Amendment is now activated in America

All law-abiding Americans who own firearms now have the constitutional right to deploy those firearms in defense of their cities, their lives and their nation.

This is America. We don’t negotiate with terrorists or tyrants. We defeat them, and the Constitution has already granted us all the means by which violent anti-American uprisings can be halted to restore order and defend the innocent. “A well regulated Militia, being necessary to the security of a free State, the right of the people to keep and bear Arms, shall not be infringed.”

That means the Second Amendment is now calling for an organized militia response to the terrorist uprisings. Its time for America to defeat the terrorists, arrest the mayors and governors who have engaged in treason against America, take back America’s cities and restore law and order. In our view, the mayors and governors who are surrendering to left-wing terrorist organizations should themselves be arrested and charged with sedition or conspiracy to commit acts of terrorism against the United States of America.

As reported by Big League Politics:

A group of self-styled “Bikers for Trump” is pledging to retake Seattle’s Capital Hill Autonomous Zone for the United States, planning on dismantling the anarchist commune on the Fourth of July.

Seattle city authorities have steadfastly refused to enforce the territorial integrity of the United States and their city, instead opting to allow ANTIFA-linked militants to stake out a secessionist project openly advertising rebellion from the United States. The American motorcyclists intend to step in and fill the void left vacant by the city’s authorities, laying out their plans for the operation in a Facebook event.

“On July 4th, Independence Day,a coalition of patriot groups and all who want to join are going to retake the Capitol Hill Autonomous Zone for America. antifa members are illegally occupying public property and terrorizing small businesses in the neighborhood. American patriots have agreed to come together again, remove the barricades illegally obstructing traffic, and free the people in the zone.”

The group claims it will be unarmed. That seems unwise, given that the Black Lives Matter terrorists are armed and have already displayed a willingness to threaten people with violence. The goal of the patriot group seems simple:

We are not going to hurt anybody, break the law etc. We are simply going to tear down the illegal barriers on public property, clean up the mess these communist kids made, and return the police station over to Seattle Police Department control.

Preliminary reports suggest that members of the Mongols MC and Hell’s Angels are already preparing to participate in the operation, which is slated to coincide with Independence Day on the Fourth of July.

When do you have the right to shoot terrorists? The laws vary by state, but the basic right to self-defense is recognized by the U.S. Supreme Court

For this section of this article, we encourage you to check local laws before deciding your course of action. We do not condone the use of violence, except in cases where the deliberate use of measured and lawful violence halts aggressors who are determined to carry out far worse acts of violence against innocent people.

Black Lives Matter and Antifa routinely invoke violence against innocent people to achieve their goals of political terror in America.

See this list of U.S. corporations that have declared their support for left-wing terrorism in America. The list includes Apple, Netflix, Google, Disney and Microsoft, among others.

Any left-wing terrorist who attempts to throw a chunk of concrete at a police officer or member of the National Guard is engaged in a felony assault and, under nearly all laws in the United States, can be shot on sight by an armed citizen acting in the interests of protecting innocent life. We aren’t sure if a jury in Seattle would find an armed citizen innocent even if they saved many lives, so if you choose to shoot terrorists in Seattle, do so at your own risk and recognize that nearly the entire population of Seattle is living under Black Lives Matter occupation, so jury intimidation would be a significant factor working against you. (Because any jury that found you innocent would be hunted down and threatened by BLM / Antifa terrorists.)

Any terrorist attempting to set fire to a building should be shot on sight, we argue. Arson is a violent crime that kills innocent people, including babies and children. If you are committing arson, you probably deserve to be shot.

Any terrorist setting fire to police cars is also engaged in arson that may harm or kill innocent bystanders. When cars are on fire, they often explode. The tires explode, too, sending shrapnel in all directions, potentially harming or killing innocent people. Any terrorist committing arson against vehicles should be also probably be shot on sight, not due to the property damage but due to their initiation of events which could harm or kill others.

Any person carrying chunks of concrete in backpacks or delivering bricks on pallets should be arrested and charged with conspiracy to commit murder, as well as sedition.

Although you should check your local laws, under existing law in most U.S. states as well as a multitude of U.S. Supreme Court decisions, any violent, armed mob that is advancing toward your position with the intent to injure or kill innocent people may be fired upon in self-defense. This is true in “stand your ground” states even when you have a means of escape but choose to stand your ground. Subject to interpretation by courts and the local DA, it’s also true even if individual members of the mob have not yet committed acts of violence against you but show clear signs that they intend to do so. Their participation in the violent mob is often deemed sufficient to invoke your right to self-defense, under the laws of many (but not all) U.S. states. In other words, in most U.S. states, you do not have to wait to be attacked in order to assert your right to self-defense. Check your local laws to be certain.

We believe it is time for U.S. citizens to assert their right of self-defense against the violent left-wing terrorist mobs. Those mobs are committed to carrying out killings, executions, arson, property destruction, beatings, kidnappings and worse. They are currently holding hundreds of residents as prisoners in CHAZ, downtown Seattle.

Every member of Black Lives Matter or Antifa is a terrorist, and when terrorists are actively engaged in acts that pose imminent risk of harm or death to innocent people, they may be shot on sight under most U.S. jurisdictions. And they probably should be.

If you don’t draw a line in the sand and halt the aggression of left-wing lunatics, their demands and insane acts will only grow more bold and dangerous to society. If you don’t stop them from seizing downtown Seattle, they will soon seize the state capitol building and start making demands as if they control the entire state.

In summary, given that police are being ordered to stand down while mayors and governors allow actual left-wing terrorist groups to destroy property, threaten lives, imprison citizens and commit acts of violence against innocents, it is now up to the people of America to assert their own right to self-defense in place of the police who are failing to do their jobs (often because they are ordered to stand down and evacuate).

There is no option remaining. We cannot live in a lawless society run by lunatic left-wing mobs that seize cities and declare themselves to be immune to all existing laws. That’s anarchy, and freedom is not possible under anarchy. If we do not defend the rule of law, then America collapses into anarchy (which is what the Democrats want, of course).

If the police will not protect law and order, citizens must step up and get the job done themselves. If that means shooting terrorists who are threatening innocent people with acts of imminent violence, then so be it. America has taken enough abuse, destruction and chaos from the lawless, lunatic Left, and it’s time for America to stand her ground and defend the rule of law.

Lock and load, America. Arm up in self-defense. Obey the law and do not kneel to terrorists. The Second Amendment has been activated, and the future of your nation is now up to you, since political “leaders” have already surrendered America to left-wing terrorists who despise this nation and have been brainwashed by the fake news media, the universities and social media to seethe with HATRED and bigotry.

You are dealing with a zombie mob of emotionally-charged lunatics who cannot be reasoned with and who refuse to abide by any laws whatsoever, even while they carry out acts of extreme violence against their targeted political enemies. Are we really going to put up with this in America?

Maybe it’s time to turn the tables on the terrorists and restore law and order across our land.

Oh, and as a final note, word is that the DOJ is coming for Antifa leaders across America soon. And if the DOJ doesn’t take them out, sooner or later the citizens will.

If you are a terrorist operating in America, your days are probably numbered.