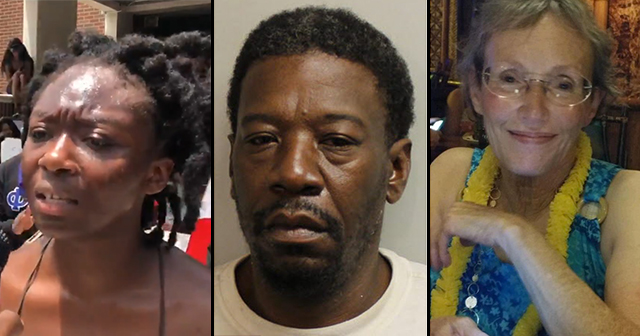 Career criminal Aaron Glee Jr, 49, was arrested over the weekend by the Orlando Police Department on warrants out of Leon County in connection with the deaths of Black Lives Matter activist Oluwatoyin Salau, 19, and AARP volunteer Victoria Sims, 75.

Salau was a BLM activist who recently told protesters to remember that “white racists” are “the enemy,” National File reports.

Oluwatoyin Salau, 19, had previously reported on Twitter that she had been sexually assaulted by two different black men before going missing amidst ongoing Black Lives Matter protests in Florida.

Video footage from the protests shows Salau giving a speech in which she says, “First of all I want White people to realize their f**king privilege… wherever the f**k I go, I am profiled. Look at my f**king hair, look at my skin bruh… so imma die about it, imma die by my f**king skin. You cannot take my f**king blackness away from me. My blackness is not for your f**king consumption, n*gga.”

“White people, realize your privilege. My blackness is not for your f*cking consumption. I will die by my skin.”

Sadly she is dead. She was sexually assaulted by two black men on different days and then killed by a black man. pic.twitter.com/2sbFTyEbgl

Salau revealed that she was “molested” by “a black man” on the morning of the day she went missing.

Anyways I was molested in Tallahassee, Florida by a black man this morning at 5:30 on Richview and Park Ave. The man offered to give me a ride to find someplace to sleep and recollect my belongings from a church I refuged to a couple days back to escape unjust living conditions.

Earlier in June, Salau recounted another instance of sexual harassment at the hands of a Ghanaian man in March.

The same niggas i'm risking my life for are the same niggas who are convinced they are stealing away my "innocence" or jewel not knowing that I am standing on a rock. Therefore I can never be broken or robbed.

Police have arrested 49-year-old Aaron Glee Jr. in connection with the death of Salau and another woman, 75-year-old Vicki Sims.

Glee Jr, a career felon with a long history of violent crime, has been charged with felony kidnapping and murder according to Heavy.

Glee has a long wrap sheet and likely would have been in prison for previous crimes if not for the success of the Black Lives Matter movement and other criminal justice reform efforts.

From the Tampa Bay Times:

Tallahassee officers had multiple run-ins with Glee in the last few weeks.

On May 28, officers investigated a report that Glee had punched a man at a bus stop. According to the incident report, Glee punched the man “over an argument regarding racial differences,” officers wrote.

Tallahassee police cited Glee for battery for that incident and gave him a notice to appear in court on July 9. He does not appear to have been arrested.

May 29, Glee was arrested on an aggravated battery charge after an officer witnessed Glee kicking a woman in the abdomen at an intersection about half a mile from Glee’s home, according to a Tallahassee police report.

Glee told officers he knew the woman because he helped the homeless and had bought her food and drinks before, according to the report. The woman told officers the two were drinking and walking down the sidewalk when Glee asked her for a sexual favor. She refused, and Glee began kicking her, according to the report. Glee denied kicking or hurting her.

WCTV reported that Glee was bonded out on June 1, just days before the murders.