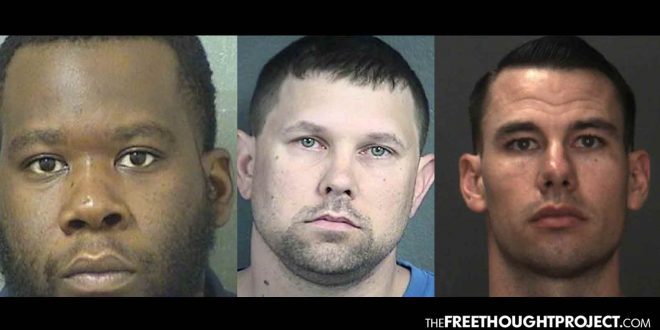 Frequent readers of the Free Thought Project know that police officers throughout the United States are arrested regularly for sex crimes. According to multiple studies, the majority of these crimes are against children. Proving the above point is the fact that cops are still getting arrested frequently for alleged sex crimes against children — despite many of them being in the streets attacking protesters.

Over the past few weeks, there has been no shortage of police officers getting caught on camera savagely abusing peaceful protesters. While a handful of the perpetrators were actually arrested, the overwhelming majority of offending officers were not. In the background, however, as protest headlines garner most of the attention, police officers are continuing to get arrested for sex abuse against children.

In the last week alone, there have been nearly a half dozen cops arrested for sex crimes against children.

One of those cops was Collier County deputy Rashaad A. Smith, 41, who was fired after his arrest Saturday night where he was hit with a whopping 100 counts of possession of child pornography.

According to WINK, Smith was arrested at his home late Saturday after a search warrant was served and evidence was seized. The CCSO arrest report states that the agency received “three cybertips from the National Center for Missing and Exploited Children from Microsoft about the transmission of child pornography on Skype.”

“The justice system will determine the outcome of this case but due to the heinous nature of these allegations, I ordered the immediate withdrawal of this person’s appointment as a member of the Collier County Sheriff’s Office,” Sheriff Kevin Rambosk said in a statement. “I know and appreciate that our community expects that when a deputy is charged with crimes like these, they are immediately fired from their position of authority and they do not continue to receive compensation from our tax dollars.”

Officer Nicholas Schafer, 36, with the Kansas City, Kansas, Police Department was also arrested in the last week for sex crimes against a child. Schafer was booked into Wyandotte County Jail last week and is being held on a $250,000 bond on charges of aggravated indecent liberties with a child.

After his arrest, Kansas City, Kansas, Police Chief Michael York released the following canned statement, claiming that their employees are held to the “highest standards.” Sure they are…

“The officer has been placed on un-paid administrative leave. As Chief of Police, I hold myself and my employees to the highest standards. All complaints against members of our Department are investigated thoroughly. Complaints about police conduct can be made by calling the Kansas City, Kansas Police Department at 911 or 913-596-3000; or directly to the Internal Affairs Hotline at 913-5736373.”

Before both of these two officers were arrested for preying on children, last Tuesday, Fontana Police officer Nicholas Stark, 28, was arrested for allegedly drugging and raping a child. Unlike the other two officers, Stark is on paid leave thanks to ridiculous police union rules.

Fontana Police Chief William Green said he is unable to fire Stark immediately due to California laws, and Stark is on paid leave.

“He is on paid leave and that is disgusting,” Green said in a statement. “However, I will endeavor to terminate him in the most expeditious manner possible.”

Another cop in Pinellas County was also arrested for sex crimes last week. Though his crimes were not against children, we figured we should mention him because he used his authority as a cop to prey on his victims.

Rutherford Jean, age 29 of West Palm Beach, Florida was arrested June 11, 2020 at approximately 11:45 a.m. for two counts of sexual battery, according to the Pinellas County Sheriff’s Office. He is accused of raping women in exchange for leniency — a crime by police that happens all too often.

Sadly these crimes against children show no signs of slowing as sexual misconduct among police officers is an unfortunately common crime. Multiple studies have shown that hundreds of cops a year are arrested or accused of sexual misconduct. In fact, the second largest complaint against officers — second only to excessive force — is that of sexual abuse. More startling — as the above cases illustrate — is the fact that over half of the sexual abuse instances involve children.