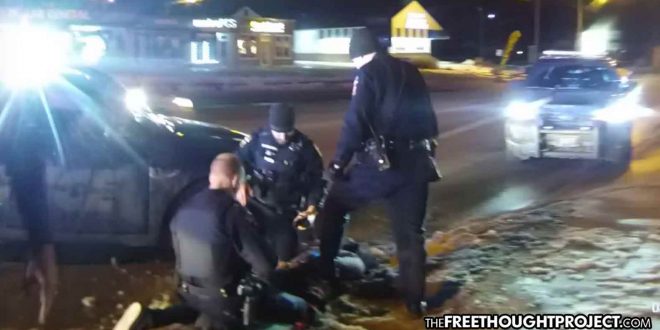 Garfield Heights, OH — Kenta Settles, a 28-year-old father of three, who is diagnosed with bipolar disorder, schizophrenia, PTSD and ADHD, had committed no crime earlier this year when he was approached and subsequently assaulted and arrested by several officers with the Garfield Heights Police Department. Because prosecutors chose to never watch the body camera footage to find out what actually happened, Settles spent five months of his life locked in a cage on trumped up charges brought against him for doing nothing but defending himself from a brutal attack.

Settles, represented by Jeremy Tor, has since filed a lawsuit against the City of Garfield Heights and the Garfield Heights Police Department alleging false arrest, violation of Constitutional rights, and excessive force for the stop which took place on January 23.

Settles’ nightmare began on that January night as he tried to fill his prescriptions for his mental illnesses at a CVS pharmacy. Because he has no car and the store was closed, Settles stood in line at the drive-thru, which was open.

Settles decided to stop by CVS on Turney Road so he could fill a prescription, Tor said. Settles is diagnosed with bipolar disorder, schizophrenia, PTSD and ADHD, according to the complaint.

The store looked close, but the drive-thru was open, so Settles decided to walk through it. Settles realized after a few minutes of standing in line that he probably looked out of place, so he decided to let the driver in the car ahead of him know he was just picking up his prescription, Tor said.

The man told Settles that he had a gun. The threat, combined with the sound of the man’s horn, spooked Settles, so he left without getting his medication and headed up Turney Road, the complaint says.

Garfield Heights Police Chief Robert Byrne said Friday that the original call was for a man trying to pull another man out of his car and that an armed robbery had been reported near the same CVS about 90 minutes earlier. Byrne did not describe the robbery suspect, and Settles has not been charged with any activity that occurred at the CVS.

In fact, the man in the drive-thru was also captured on body camera and at no time did he ever claim anyone tried to pull him from the vehicle. All he told the police was that he thought Settles was a “bum” trying to ask for money, and he felt scared because he had his mother-in-law in the passenger seat and he thought Settles tried to open his door.

The man claimed that he couldn’t hear anything Settles was saying because he was honking on the horn. After not receiving a response, Settles walked away — a fact confirmed by the man who called police.

“When I laid on the horn, he pointed, like he was saying something,” the man was recorded telling police on the video. “I couldn’t hear because I was laying on the horn.”

As Settles walked home, he was then confronted by Garfield Heights police officer Michael Malak who proceeded from the start to violate Settles’ rights. At no time did Malak ask Settles any questions and instead began leading him to the patrol car.

“Why didn’t you stop when I asked you to stop,” Malak asked, as officer Robert Pitts showed up in another police car. Settles said he did, and Malak replied, “no, you didn’t.”

It was clear from the video, however, that Settles was far from Malak and did respond and cooperate once he saw the flashlight on his body.

The situation escalated from there. Instead of asking Settles a single question, the two cops began manhandling him, slamming him into the car and demanding he submit to their commands. Settles was justifiably frightened and was trying to ask police why he was being detained, as he had committed no crimes.

Instead of talking to him, however, the cops escalated force, threw him to the ground and punched him repeatedly as he lay in the fetal position trying to protect himself.

When his lower back is exposed from the fetal position, cops attacked it with tasers and electrocuted him.

He was then beaten further, tasered again, before being stood and knelt on for several minutes lying motionless on the ground, crying. For good measure, police took to mocking and insulting him afterward.

When they noticed he was crying, they mocked him further.

“This is another unfortunate example of police brutality against members of our community,” Tor said.

“From the get-go, the officers approached him with hostility and in a very aggressive manner.”

“This was a perfect illustration of how things could have gone so much better if the police officer approached Kenta with the appropriate level of respect that I think he and everyone in our community deserves.”

“Rather than yell and bark orders at Kenta and haul him to the front of a police car without explanation, they could have approached him calmly, talked to him like a human being and said, hey how’s it going, what’s going on, everything okay?”

After he was arrested, the body camera was not presented to prosecutors to show what actually transpired. Instead, Settles’ case was presented to a Grand Jury on the word of officers and he was indicted and jailed on a $250,000 bond. The charges carried a maximum sentence of 24 years in prison.

However, Sinclair told reporters that O’Malley watched the video last Wednesday and charges were dropped on Thursday. Settles was finally freed after spending months away from his children all because the cops who approached him that night had no idea how to actually investigate an alleged crime and instead resorted to immediate escalation of force.