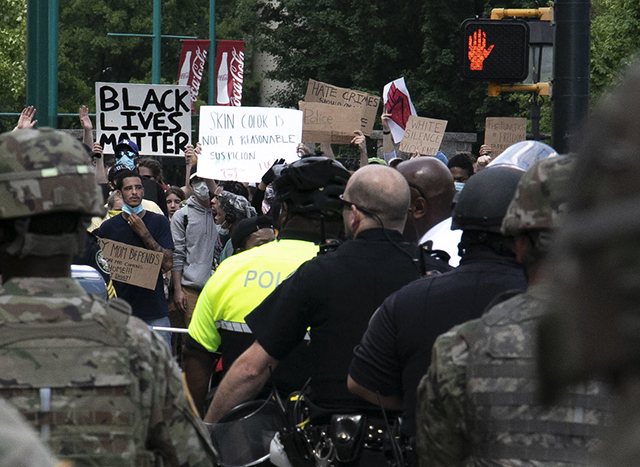 Atlanta police are reportedly “walking off the job” and “refusing to answer the radio” after two officers were hit with charges from murder to assault on Wednesday in the shooting death of Rayshard Brooks, a felon child abuser who fell asleep while drunk driving in a Wendy’s drive-through and fought with police who tried to arrest him.

Conservative talk show host Steve Deace reported Wednesday evening: “Just got this email from an Atlanta police officer: ‘Atlanta police officers are refusing to answer the radio and walking off of the job. The county can go screw themselves. If you want a society without police we’ll give you one. Let it burn!'”

Just got this email from an Atlanta police officer:

"Atlanta police officers are refusing to answer the radio and walking off of the job. The county can go screw themselves. If you want a society without police we’ll give you one. Let it burn!"

Fulton County District Attorney Paul Howard unveiled the charges on Wednesday while claiming Brooks “never presented himself as a threat.”

Here is video of the DA from that press conference:

"A taser is considered as a deadly weapon under Georgia law." pic.twitter.com/WBCKNYdZ0W

Video of the incident shows Brooks fought with police and tried to shoot them with one of their own tasers.

District Attorney Paul Howard is currently under investigation for using a “nonprofit to funnel at least $140,000 in city of Atlanta funds to supplement his salary” and is facing multiple allegations of sexual harassment, AJC reported in May.

The Daily Mail reported Wednesday that “Rayshard Brooks was on probation for four crimes – including cruelty to children – and faced going back to prison if [he was] charged with a DUI.”

What the media isn’t reporting about #RayshardBrooks needs to go viral. This CRIMINAL caught a felony for beating his wife and terrorizing his children. He was violent his entire life, up until the last moments.

How DARE the media try to spin him into a victim? pic.twitter.com/pkkKDXghxO

Dedication to family. You’ve got to be kidding me. He terrorized his family, abused his children, and beat his wife. pic.twitter.com/e3kGj4dr06

Black Lives Matter rioters responded to Brooks’ death by burning down the Wendy’s where he was arrested.

Wendy’s is on fire as protests over the police shooting death of #RayshardBrooks escalated tonight. People are warning that flames are dangerously close to a gas station pic.twitter.com/dmEakrlG1y

Two female suspects are wanted for arson for either starting

IT TAKES 2 SECONDS TO SHARE! They are wanted for setting fire to the Wendy's on University Avenue this past Saturday. Do you recognize them? Tipsters could be eligible for up to a $20,000 reward! MORE: https://t.co/vQUf23cpCL pic.twitter.com/T4UVjFP7lm

WGCL-TV reported on Monday that 8 officers had resigned due to plummeting morale.

Every Atlanta Police officer should walk off the job. Let BLM patrol the streets.

I’ve been a long-time critic of police abuse (especially during the Bush and Obama era when the media refused to cover the topic and demonized those of us who did as “anti-government” terrorists) but there’s clearly a larger agenda at play with this whole “defund the police” movement.

The police are the last conservative-leaning institution in Post-America and the only powerful group standing up against this top-down color revolution.

As Tucker Carlson said in his viral monologue that brought the wrath of Corporate America upon him:

In the future, the left envisions, the only people who will have guns are people on their team, and that’s exactly what defund the police really means. It means a woke militia policing our cities, enforcing Democratic Party orthodoxy.

Imagine if the Diversity Inclusion Department at Brown University had the power to arrest you. Imagine if the Black Lives Matter rioters had weapons and immunity from prosecution. That’s what they’re talking about. Partisan law enforcement and partisan law enforcement, incidentally, is hardly without precedent. In fact, it’s the rule in the third world. This is an attempt to bring it here.

As Senator Rand Paul revealed earlier this month, Democratic Senators Kamala Harris and Cory Booker and Republican Senator Tim Scott’s Orwellian “anti-lynching bill” will allow the feds to throw Americans in prison for 10 years for slapping someone and uttering a racial slur.

Democrats are releasing almost everyone arrested for taking part in the riots and looting over the past month but they’re going after cops, arresting Americans standing up against the mobs and pushing to mass incarcerate right-wingers for thought crimes.