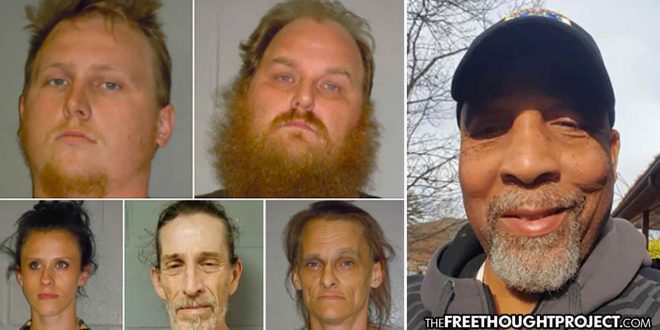 Woodstock, VA — Leon K. McCray Sr., of Woodstock is a retired Air Force veteran and the pastor at Lighthouse Church & Marketplace Ministries International. He has no criminal record. All that has since changed, however, because he made the decision to call police for help when five trespassers threatened to kill him earlier this month.

“I felt, literally, like I had been lynched without being killed,” McCray said of the incident, calling it “indeed the most humiliating, dehumanizing, damning and violating event of my life.”

The incident unfolded on June 1, when McCray was visiting an apartment he owns in Edinburg, Virginia. He noticed two people dumping a refrigerator on his property who became irate when he asked them to leave.

McCray said the two individuals threatened him and showed back up with three more people shortly after. The five people attacked him, according to McCray while saying “they don’t give a darn” about “my black life and the Black Lives Matter stuff,” and telling him they would “kill” him.

Fortunately, McCray is an advocate of the Second Amendment, and as the five individuals, who all happen to be white, were attacking him, he pulled his concealed pistol. While holding his attackers at bay with his gun — which literally saved his life — McCray then called 911 to report them.

“Being threatened and fearing for my life, I took and felt compelled to pull my legal concealed weapon to save my life, and when I did that, finally these individuals backed up long enough for me to call 911,” McCray recounted, calling it a very “traumatic experience.”

Instead of aiding the man in need, however, when deputies arrived, they disarmed McCray and arrested him, all while talking with the five people who just assaulted him. The entire time, the attackers were reportedly yelling racial epithets at McCray, who happens to be black.

McCray said he was “handcuffed in front of the mob” and wasn’t given the chance to tell his side of the story.

The arrest “would not be tolerated if I was white,” he said.

While McCray was in handcuffs, his five assailants remained free as the deputy talked to them.

Even after the stories were told, McCray was still arrested and charged with brandishing a firearm for defending himself against 5 people threatening him on his own property. McCray — who was the one who called police for help — was then driven away in handcuffs while the group stood with other deputies, waving at him as he went down the road.

“This was indeed the most humiliating, dehumanizing, damning and violating event of my life,” McCray said.

Not until a week later did the Shenandoah County Sheriff’s Office actually charge the individuals who threatened McCray.

Eleven days after he was arrested for defending himself on his own property, only after the story was picked up by the local news, did the sheriff choose to publicly respond.

Taking to Facebook on Friday, Shenandoah County Sheriff Timothy Carter made an apology after realizing the ridiculous nature of McCray’s arrest and treatment.

“It was apparent to me that the charge of brandishing was certainly not appropriate. Actually, as I told Mr. McCray, if I were faced with similar circumstances, I would have probably done the same thing,” Sheriff Carter said. “I initiated an immediate review of Mr. McCray’s charge, the remaining persons and potential charges of other persons involved in this incident, and an internal review of the actions or inaction’s of the Sheriff’s Office staff that responded.”

Carter says that the Shenandoah Commonwealth’s Attorney is now moving to drop the charges against McCray.

To those who think that racism doesn’t exist in law enforcement, this case should serve as evidence to the contrary. As TFTP has reported time and again, there is absolutely no denying that minorities are persecuted in this country at a far higher rate than their white counterparts. All the data and all the statistics do not lie — minorities are on the receiving end of police brutality and government oppression more often than white people.