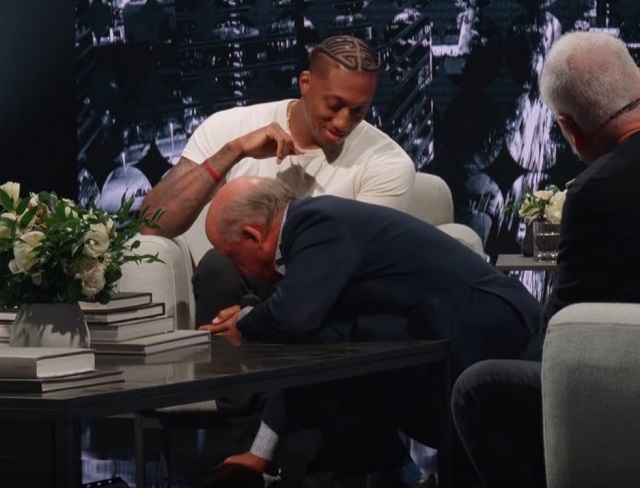 Chick-Fil-A CEO Dan Cathy got down on his knees and shined rapper Lecrae’s shoes after claiming white Christians should shine stranger’s shoes to “repent” for the “shame” and “embarrassment” of racism.

Chick-Fil-A CEO Dan Cathy says white people should find black strangers, go up to them, and shine their shoes to show repentance for their sins of racism.

He once bought 1,500 shoe brushes for his employees to shine strangers’ shoes to exhibit their remorse for racism, Cathy said Sunday during a panel discussion at Passion City Church in Atlanta, Georgia.

If you want a good laugh, you can watch the embarrassing scene here:

After shining Lecrae’s shoes, the rapper said while laughing that Cathy should also give him “some stock in Chick-Fil-A.”

Though people think of Chick-Fil-A as a Christian conservative company, that all changed in 2017 when they donated money to the SPLC and decided to put the pursuit of profit before all else.

The cult of “wokeness” has replaced Christianity in many people’s minds.

Place where George Floyd died is now where baptism takes place and Floyd is now a proclaimed Saint pic.twitter.com/2eX1oAWnpE

Pelosi presents folded flag to George Floyd's brother. I must be wrong. I thought they only did this for service men and women who gave the ultimate sacrifice? pic.twitter.com/7CivuC1VBW

This is their god now:

So, constitutional conservatives have now thrown due process under the bus & deify a street criminal who robbed a pregnant woman – holding gun to her stomach – in home invasion. Not a good look @sentedcruz – Appeasing the mob & taking a knee will only hasten America's demise. pic.twitter.com/HzPtl4ElNu