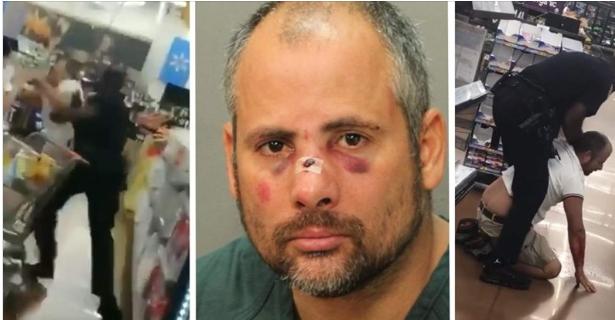 Editor’s Note: I used the title to demonstrate that though I’m pointing out skin color, it is to counter the narrative that skin color is the reason for this kind of behavior. It’s about the corruption of the human heart… black white, red, yellow…. all men are sinners in need of a savior from sin… His name is Jesus the Christ.

Jacksonville, FL — An off-duty police officer working security assaulted a man in a Wal-Mart store because he was attempting to purchase items after the store was closed. The alleged victim, 43-year-old Yoel Rodriguez was then arrested by the off-duty officer and charged with battery on a law enforcement officer because he resisted arrest. An employee reportedly told security that Rodrigeuz and his family were in the store after closing time and were refusing to leave without checking out their items. However, they are seen trying to check out and there are several other people in the store after close as well.

An officer for the Jacksonville Sheriff’s Office was working security for the store in an off-duty capacity at the time, but was still in uniform. The officer, who has not been named publicly, confronted Rodriguez in the checkout line, but he was not the only customer still in the store, because there were other bystanders who started recording the incident as soon as it began.

Rodriquez was in the store with his young daughter and his wife and the entire incident was likely sparked over the fact that Rodriguez does not speak English and did not understand what was going on.

The officer is the first to put his hands on Rodriguez, who was being defiant, but not aggressive. As the officer attempted to grab Rodriguez, he pulled back multiple times, shouting “Let me go, don’t touch me,” in Spanish.

Next, the officer punched Rodriquez in the face multiple times. His wife and child looked on in horror as he fell to the ground with a bloody face before being handcuffed by the officer.

David Rodriguez, Yoel’s nephew, said that his aunt and uncle do not speak English. David says that they were confused about what was happening in the store and did not intend to cause any trouble. In fact, according to a records request, Rodriguez has absolutely no criminal record and has had no run-ins with police.

Rodriguez was left with two black eyes and a broken nose and was ordered to be held on a $7,500 bond. The officer did not appear to have any injuries, and at no point in the video did Rodriquez attempt to hurt the officer, he was just pulling away, which seems to be the basis for the charges against him.

Witnesses reportedly said that employees overreacted in calling the police to begin with, and it was obvious that the family did not speak much English.

An anonymous witness detailed the situation in an interview with News4Jax.

“I don’t know exactly what the cop said, but I think he was telling him he had to leave. He wasn’t going to get to pay for his stuff. ‘I just need to pay. I just need to pay.’ The cop kept trying to grab his arm and he was like, ‘Don’t touch me. Why are you touching me? Don’t touch me.’ And the cop just whaled back and just popped the dude in the nose. That cop should have never been called. I think he’s 40 percent at fault because he punched the guy. But Walmart should have never escalated it to the point where they’re harassing one of their customers, just because he’s grabbing something extra while his wife’s waiting in line,” the witness said.

Steve Zona, president of the Jacksonville Fraternal Order of Police, issued a statement defending the officer in the video, saying that Rodriquez was resisting arrest and “hit the officer’s arm.”

TRENDING:  With Grenell Appointment, Israel Lobby’s Foothold On US Intelligence Grows Even Stronger

“We are thankful that the officer was able to overcome the resistance and prevent severe injury to the defendant, injury to himself, or injury to innocent bystanders,” Zona wrote.

Yeah, great job beating an innocent father in front of his family for trying to pay for his groceries before leaving the store. This is why people are in the streets.

John Vibes is an author and researcher who organizes a number of large events including the Free Your Mind Conference. He also has a publishing company where he offers a censorship free platform for both fiction and non-fiction writers. You can contact him and stay connected to his work at his Facebook page. John just won a 3-year-long battle with cancer, and will be working to help others through his experience, if you wish to contribute to his treatments consider subscribing to his podcast to support.