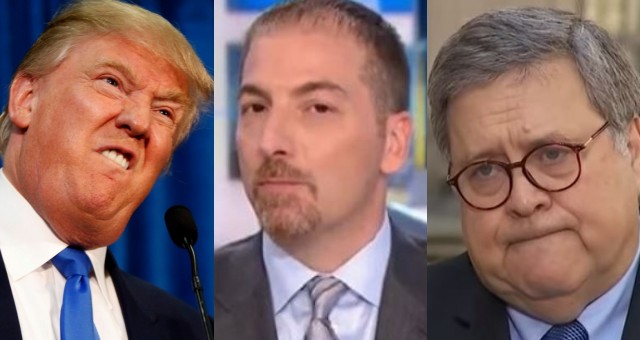 President Trump, in a late-night tweet, called for the firing of NBC News anchor Chuck Todd after his show “Meet the Press” admitted to deceptively editing a video of remarks made by Attorney General William Barr.

Flynn, a retired United States Army Lieutenant General, pled guilty to lying to the FBI over contacts with Russia in late 2017, but documents unsealed by the DOJ show his plea was likely the result of a coercion and entrapment plot.

Responding to Herridge, Barr replied with a laugh, “Well, history is written by the winners, so it largely depends on who’s writing the history.”

That is where NBC ended the clip, despite Barr going further.

Todd jumped off of that brief video to say he was “struck by the cynicism of the answer – it’s a correct answer, but he’s the attorney general.”

“He didn’t make the case that he was upholding the rule of law,” Todd added. “He was almost admitting that, yeah, this was a political job.”

Today on Meet The Press, @chucktodd wildly took context out of an answer AG Bill Barr gave about his decision to drop the case into Gen. Michael Flynn.

I cut Todd’s segment along with Barr’s full answer together. Look at how blatantly dishonest this is. pic.twitter.com/tODOEwL48V

Despite Todd’s insistence that Barr was essentially admitting to a political ‘hit job,’ the very next statement out of the AG’s mouth, which NBC clipped, was proof of the exact opposite.

“I think a fair history would say it was a good decision because it upheld the rule of law,” Barr said. “It upheld the standards of the Department of Justice, and it undid what was an injustice.”

DOJ spokeswoman Kerri Kupec called NBC out for the “deceptive editing/commentary” on Todd’s part adding that Barr not only makes the case “in the VERY answer Chuck says he didn’t,” but also “multiple times throughout the interview.”

Very disappointed by the deceptive editing/commentary by @ChuckTodd on @MeetThePress on AG Barr’s CBS interview.

Compare the two transcripts below. Not only did the AG make the case in the VERY answer Chuck says he didn’t, he also did so multiple times throughout the interview. pic.twitter.com/PR1ciceMmE

“Meet the Press” responded to Kupec’s allegation admitting that they were in the wrong.

“You’re correct,” they wrote. “Earlier today, we inadvertently and inaccurately cut short a video clip of an interview with AG Barr before offering commentary and analysis. The remaining clip included important remarks from the attorney general that we missed, and we regret the error.”

“Inadvertently”? You “missed” the remarks?

You didn’t miss them because they were in the same sentence that was clipped. You intentionally removed them to create a false narrative.

Sleepy Eyes Chuck Todd should be FIRED by “Concast” (NBC) for this fraud. He knew exactly what he was doing. Public Airwaves = Fake News! @AjitPaiFCC @FCC https://t.co/fLTDhjMXo4

President Trump called for Todd’s firing over the incident.

“Sleepy Eyes Chuck Todd should be FIRED by ‘Concast’ (NBC) for this fraud,” he charged. “He knew exactly what he was doing.”

Trump tagged the FCC and their Chairman, Ajit Pai, in the message.