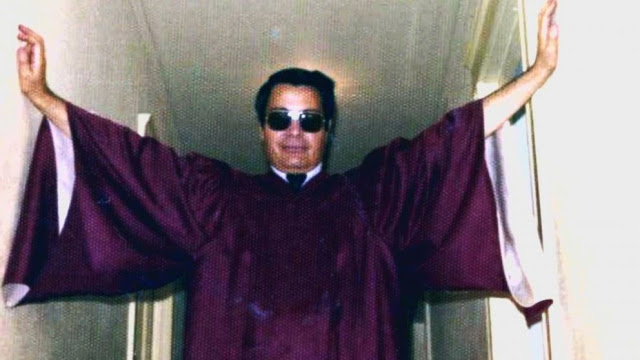 Dave Patrick Underwood, an African-American Federal Protective Service officer, was shot and killed at the Ronald V. Dellums Building during the radical riots in Oakland, California. A building named after Congressman Dellums is burdened with its own weight of historical complicity in leftist atrocities.

“Let me commend your pastor, Jim Jones, for the dedication he is showing to his community and surrounding areas,” Congressman Dellums once wrote. “And also for impact he makes on members of his congregation.”

At Oakland’s Evergreen Cemetery, some distance from the riots, a plaque over a mass grave reads, “In memory of the victims of the Jonestown tragedy”. The names on the plaque include that of Jim Jones.

Jones, who called cops “pigs” and posed with Huey Newton of the Black Panthers, told his mostly black followers to die horrifyingly of cyanide poisoning to resist the racism of the United States of America.

The white leftist who claimed to uphold the value of black lives killed hundreds of black people. 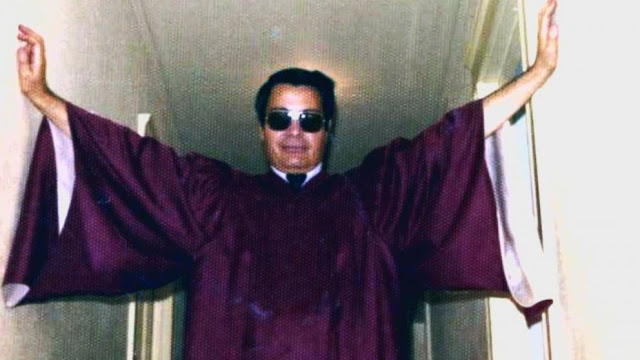 Radicals call for a reckoning with America’s history. But they have not reckoned with their own history that played out much more recently than 1619. 1970s Jonestown has become their model for America.

Jonestown is much more relevant to what is going on in America now than the current revisionist history of Jamestown embraced by the radicals. And there is no more obvious barometer for the lost reckoning than the plaque which lists Jones as one of the victims of a tragedy, instead of a mass murderer. Calling the socialist massacre a tragedy suggests that Jonestown, like the USSR, was a noble cause that failed.

Talk to lefties of a certain age about Jonestown and they’ll mumble about CIA mind control experiments and FBI COINTELPRO operations against activists who wanted to bring about social change. The mass grave in Oakland, like the mass graves in Cambodia, the USSR, and Communist China, are uncomfortable realities. And while mainstream media narratives don’t go that far, they erase what Jones stood for.

The mad mob scenes in Oakland and across California with the power of the Democrat establishment behind them, the viral videos of white millennials kneeling and confessing their privilege, are the People’s Temple writ large on a nation. Jones, the son of a Klansman, who was inspired by a Communist-allied cult to build a following as a Marxist preacher of interracial brotherhood, joining the California Democrat establishment before going down in flames, has once again become the future.

Jones ran a leftist cult of white leaders who called themselves black and exploited their mostly black congregation, endorsing the Black Panthers and other black nationalist terror groups, while serving as a core political organization for California Democrats, including former Governor Jerry Brown.

The stain of Jim Jones is still all over California. A generation of California Democrat leaders either allied with Jones or were mentored by Jones’ political allies like Willie Brown. That includes both Senator Kamala Harris and Governor Newsom. That’s why, decades later, California is still stuck in Jonestown.

Jim Jones is “what you should see every day when you look in the mirror”, Governor Jerry Brown gushed. It’s not what we see. But it’s what Brown saw. And what so many Democrats see.

“Revisiting Peoples Temple’s goals of apostolic socialism and racial reconciliation offer important insights for understanding the group’s legacy that can contribute insight into ways of solving ongoing social problems related to poverty and racial inequality in the United State,” David Feltmate, an associate professor of Sociology at Auburn University, has argued.

Such calls are not unique. Like lefty histories of the USSR, historians, academics, and even PBS, seek to extract Jones’ good politics from his bad ending while refusing to recognize that they are intertwined.

There are certainly insights in Jones’ methodology of fleecing and humiliating wealthy white lefties, and exploiting elderly African-Americans who thought that the Peoples Temple would take care of them for the rest of their lives, only to be killed when the apostolic socialist cult collapsed under its own abuses.

All of that could have been avoided if the media hadn’t covered it up until one of their own got killed.

The Jonestown model is also the model for the Democrat Party which, like Jones, lures in upscale whites by playing on their idealism and guilt, humiliating them to keep them from seeing that the whole thing is a scam, and using the black people it lured in with promises of a social safety net to claim moral superiority. Add in a streak of terror and thuggery to keep everyone in line, along with a dash of sexual sadism to compromise and destroy the moral integrity of core cult members, and you have utopia.

Exploiting racism was central to the appeal of the Peoples Temple as it is to the Democrats.

The Peoples Temple used the moral drama of racism to create a racial conflict, playing on the guilt of white people and the fears of black people to divide them, threatening apocalypse and offering redemption through socialism. Racism was the source of Jones’ power. It was the primal sin and fear that he held over the heads of his followers to incite them to commit horrible crimes against each other.

And to stay silent while he committed even worse atrocities.

There is no meaningful reckoning that Americans can make with 1619, but it is vitally important that there be a reckoning with the seventies as Jonestown is becoming a statewide and nationwide model.

The latter-day Joneses promise redemption through socialism and twist America around the axis of race. Using the weight of racism, they are able to justify any crime and any abolition of rights in its name.

The ultimate victims of Jonestown were largely black. That’s also true of the Democrat Party.

Jim Jones was the first to turn racism into a religion. The end of the Peoples Temple and Jonestown are instructive now that racism has become the national religion of Jones’ Democrat Party. The cult leader had told his followers that God was socialism and that a man was as godly as he embodied socialism. And Jones was the ultimate divinity because he was the embodiment of the Principle of Socialism which alone could reconcile the races and all of humanity to paradise by becoming the gods of socialism.

“God was a liar. The snake told the truth,” Jones told his followers.

God told the truth. It’s the socialist snakes who always lie. Jim Jones promised his followers utopia, but he couldn’t deliver paradise. The people ate the poisonous apples, but never became as gods. Instead they tortured and killed, engaged in sexual debauchery of every variety, blackmailed and assassinated each other, and then died in terrible pain after first poisoning the elderly and then the children.

The Democrats and their media are telling the nation that burning and looting cities is the path to utopia. As Attorney General Maura Healey of Massachusetts said, “America is burning, but that’s how forests grow.” Jones would beat and sexually humiliate his followers during services and tell them that they were better people for it. But the only leaders who want to beat and burn aren’t going to utopia. They are ushering in the familiar hell on earth in whose cruel flames every utopian experiment ends.

A month before the mass deaths, a Soviet diplomat visited Jonestown and listened to the men, women, and children who would soon be dead serenade him with a rendition of, “I’m a socialist today, and I’m glad.” Jonestown, like the Soviet Union, Venezuela, or Cuba, was doomed even if no outside forces had intervened. It was a failed experiment in utopianism that could only end one way.

The same is becoming increasingly true of the Democrat enclaves, including in California where Jones had the most success and enjoyed the political protection of top Democrats and every major paper.

The Jonestowning of America is an act of brutal power by the Joneses and of despair by their followers.

Like Jim Jones, the Democrats have no vision or hope to offer. Utopia has been replaced with pain and death. The screams of hate and the wrecked blocks in New York, Chicago, Los Angeles, and San Francisco are the nation’s Jonestowns. The country’s biggest cities have become failed experiments in social justice where the socialist cant is preached all the louder even as things only get worse.

As the end approached, Jones took refuge in paranoid delusions and apocalyptic conflicts, inventing enemies and lashing out at them to evade responsibility for his corruption and crimes. All the radicalized Democrats have to offer are apocalyptic visions of environmental armageddons and perpetual racial atonement in a country that was irredeemably evil even over a century before its birth. Hope. Change.

The arc of history points not to progress, but to Jonestown. The Joneses are torturing their followers with pandemic lockdowns, rioting, economic destruction, environmental impoverishment, and cultural collapse to sate their own sadistic impulses and to divert attention from the failures of their ideas.

All that’s left now is the grim death march through the opening of prisons, the normalization of crime, the Green New Deal, socialized medicine, and the random crises met with tyranny on the way to utopia. At the end, the men and women who had followed Jones realized that the promise of a socialist kingdom of heaven on earth was a lie. There was no food. Bibles were being torn up for toilet paper. The only escape from the misery was death. That is also the great leftist vision for western civilization.

When our civilization lies in ruin and daily life is a miserable horror, they expect us to be ready to die. Kill the elderly in the nursing homes. And then the children. Then everyone has to drink the Kool-Aid.

The progressive leaders will say that it’s an act of mercy and courageous idealism.

“There’s scientific consensus that the lives of children are going to be very difficult. And it does lead young people to have a legitimate question: Is it OK to still have children?” Rep. Alexandria Ocasio-Cortez wondered.

The Democrats have perfected Jones’ trick of using racial guilt to empower a white elite to carry out the socialist schemes that make them feel like gods even as they impoverish, enslave, and destroy. But, just like in Jonestown, all anyone has to do is look at the carnage and ask, “Is this progress? Where’s utopia?” Are the burning cities, the kneeling mobs, and the terrorized people really leading to utopia?

Daniel Greenfield is a Shillman Journalism Fellow at the David Horowitz Freedom Center. This article previously appeared at the Center’s Front Page Magazine.
Click here to subscribe to my articles. And click here to support my work with a donation.
Thank you for reading.