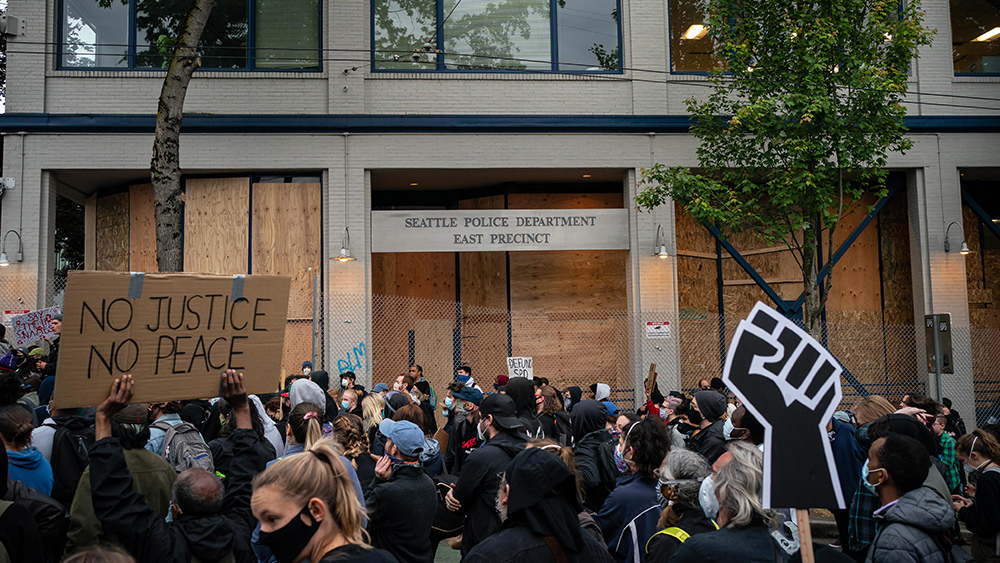 (Natural News) A 33-year-old Philadelphia woman is facing up to 80 years in prison and a fine of up to $500,000 for allegedly setting fire to two police cars during the George Floyd riots.

Elisabeth Blumenthal, a massage therapist, was caught in photos torching one of the city-owned vehicles before taking a fiery piece of debris and torching the other. Video footage also showed Blumenthal wearing protective goggles and gloves, suggesting that she had planned the destruction in advance.

“According to the complaint, various videos taken at the scene captured the defendant wearing protective goggles and gloves, taking a flaming piece of wooden police barricade from the rear window of the PPD sedan that was already on fire, and then shoving the flaming wood into the PPD SUV that was not on fire,” a Department of Justice (DOJ) report explains.

“Within minutes, the PPD SUV was also completely engulfed in flames. As a result of the fires, both PPD vehicles were destroyed.”

One of the FBI agents involved with the investigation said that Blumenthal was able to be tracked down thanks to photos that were publicly posted to Instagram. These included 500 images that an amateur photographer captured of the mayhem that took place in Philly that day.

From these photos, the FBI was able to identify the source of a t-shirt worn by Blumenthal during her crime spree that read “KEEP THE IMMIGRANTS, DEPORT THE RACISTS.” As it turns out, this shirt is custom-made and sold on Etsy, which is where law enforcement was able to attain the identity of Blumenthal through a subpoena.

“The FBI agents saw that an Etsy user named Xx Mv, whose personal Etsy URL was ‘alleycatlore,’ which described herself as living in Philadelphia, had posted a review after apparently purchasing the shirt,” VICE reported.

“The FBI then Googled ‘alleycatlore’ and found a user named ‘Lore-Elisabeth’ on the mobile fashion store Poshmark. Another search for ‘Lore Elisabeth Philadelphia’ led the agents to a LinkedIn page for a woman who works as a massage therapist for a company in Philadelphia.”

This website reportedly contains, or at least did contain, videos of massages that were uploaded to Vimeo. And sure enough, one of the videos featured Blumenthal, whose identifying arm tattoo was clearly visible in the footage, linking her to the Philadelphia George Floyd riots.

From all of this, the FBI was able to track down Blumenthal’s phone number, which led the agency to her home address via the Department of Homeland Security (DHC) Electronic System for Travel Authorization. After this, the FBI found Blumenthal’s DMV photo and the rest is history.

The FBI was also able to get Etsy to comply with verifying that Blumenthal had, in fact, purchased the aforementioned t-shirt. She actually bought two of them, reports indicate, one of which was an exact color match to the one seen in the incriminating photos.

Blumenthal has since been arrested and is now in jail awaiting trial. Meanwhile, her lawyer has indicated that the FBI’s tactics in identifying and apprehending Blumenthal will be scrutinized as part his pre-trial investigation of the case.

As for the incriminating photos, supporters of Black Lives Matter (BLM) are encouraging “non-black” photographers to be extra careful not to take pictures or videos of protesters in such a way as to implicate them in criminal activity.

“Before posting and sharing, have you properly protected the protestors’ identities by completely blocking out faces, tattoos, and easily identifiable clothing?” a “Dear Non-Black Photographers” announcement reads. “This applies to both pictures and video documentation.”

For more related news about left-wing rioting and violence, be sure to check out CivilWar.news.