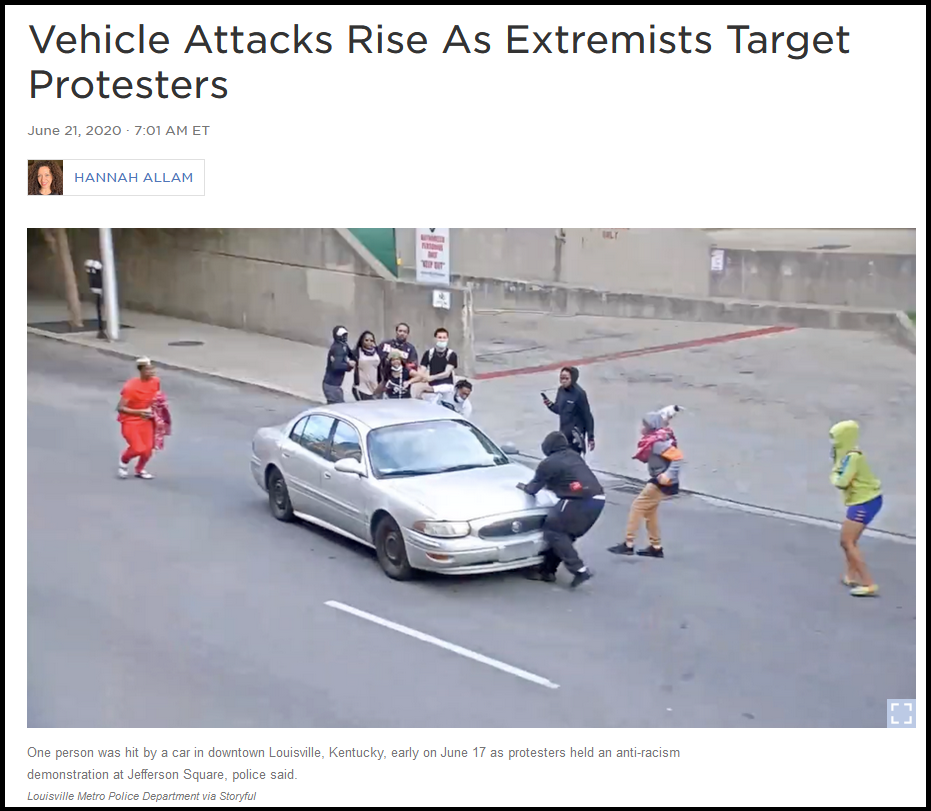 NPR has altered an article after they were busted using a misleading photo of a ‘vehicle ramming’ in Louisville to make the claim that ‘right-wing extremists’ are targeting protesters with cars.

Here’s what actually happened – the driver of the car, a woman with dreadlocks, was attacked by the ‘peaceful’ protesters, one of whom reportedly pulled a gun on her – and another who was struck as she accelerated to escape:

Here's a fuller video of what you're calling a "right-wing extremist attack" … a driver is harassed by a group of people, tries to get away, is then attacked by a larger group… and uses their vehicle to defend themselves and get away.

This story is leftist bullshit. pic.twitter.com/771gEebiqg

The driver of the vehicle came forward and won’t face charges, while two of the protesters have been arrested.

The incident near 6th and Liberty streets during the Wednesday morning rush was captured on a real-time crime camera.

Police said protesters had blocked the intersection, standing in front of the woman’s car with a megaphone.

During a verbal altercation between the driver and the protesters, someone ripped out one of the driver’s dreadlocks.

When someone pulled a gun, the driver sped off and struck a protester.

When she stopped at a red light a block later, someone pointed a gun at her.

Police said that man was 21-year-old Darius Anderson, who allegedly passed the gun off to 19-year-old Brioanna Richards.

Both are charged with rioting, disorderly conduct and obstructing a highway. –WAVE3

NPR deleted their tweet and changed the photo in the article to a 3-year-old image of the Charlottesville vehicle ramming.

The article is still up, but they changed the picture to Charlottesville… because that's all they have.https://t.co/OtwCFz1MRl

So – while NPR claims at least ’50 vehicle-ramming incidents’ since late May, and tried to pass off a photo of a victim fleeing a potentially deadly situation, the liberal news network was unable to find a single photo of a recent ramming incident by ‘said extremists.’

Note: A previous version of this post and story included a photo of a protester being struck by a car in Louisville, Kentucky. The photo, chosen by editors, does not appear to be an example of the assaults described in the story, and has been replaced. pic.twitter.com/mDIzyoLmPO

Note: A previous version of this post and story included a photo of a protester being struck by a car in Louisville, Kentucky. The photo, chosen by editors, does not appear to be an example of the assaults described in the story, and has been replaced. pic.twitter.com/mDIzyoLmPO