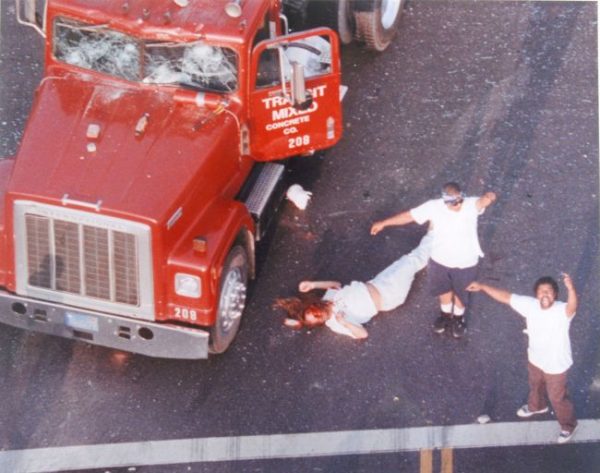 Where is America headed in the next five months?

Perhaps a complete breakdown in supply-chain management? The end of just-in-time inventory? If there is hope, it lies not in the proles, but the truck drivers. For they could halt commerce overnight in cities all across America working to stop systemic racism/implicit bias/institutional racism by simply refusing to deliver goods. [Truckers say they won’t deliver to cities that defund police, according to poll, Fox59.com, June 16, 2020]”

But this push to “defund police” hasn’t necessarily sat well with truck drivers on the front lines of a global pandemic and protests.

A new poll suggests that 3 out of 4 truck drivers would fear for their personal safety if police departments were disbanded or defunded.

CDLLife, a news website for the commercial trucking industry, asked drivers if they would deliver to cities with defunded or disbanded police departments.

According to the website, 79% of over 1,283 respondents said they would refuse loads to such cities.

Truck driving is among the deadliest jobs in the United State,s with 966 drivers killed on the job last year, according to the U.S. Bureau of Labor Statistics.

As America grapples with the coronavirus pandemic, truck drivers have been risking their lives to keep products moving to stores, hospitals and elsewhere.

“I will not deliver to an area with a disbanded police department. My life matters and I do this for my family. We are already at the mercy of these towns and cities with laws and hate against us for parking, getting a meal or even using a restroom,” one respondent told CDL News.

“For my own safety and security of my customers’ loads, I have already informed my dispatcher that I will refuse all loads to cities that have defunded their police departments,” another said.

Nine members of the Minneapolis City Council on Sunday announced they intend to defund and dismantle the city’s police department. Other cities, such as New York and Los Angeles, have moved funds for police to other resources such as social and youth programs.

Guns and ammo. And then more ammo.