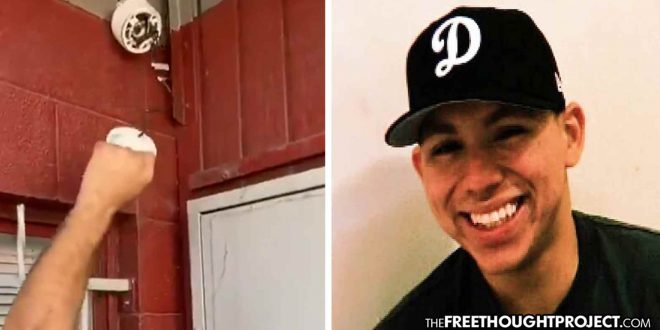 Los Angeles, CA — Andres Guardado, 18, had no criminal history. Nevertheless, police began chasing him down and killed him last week. According to his family, he was working as a security guard last Thursday at a repair shop in Los Angeles before police fired 7 shots into him as witnesses say he was on his knees with his hands behind his head. After they killed him, police then destroyed all the cameras that may have caught the interaction before stealing the DVR from the repair shop. Now, as they promise “transparency,” they are blocking the results of the autopsy from the family.

According to police, deputies saw Guardado, who was working as a security guard at an auto body shop, flash a handgun before running towards two businesses, prompting deputies to pursue the suspect and fatally shoot him in the torso.

“Deputies engaged in a short foot pursuit between the two businesses, at some point the deputies contacted the suspect and that’s when the deputy-involved shooting occurred,” the department said in its statement.

They then claimed a gun was found at the scene, a claim the family disputes. Also, it is important to point out that Guardado, who was at work, would have no reason to flash a gun at police. What could he possibly have to gain from this?

The police claims are also disputed by witnesses who say Guardado had no gun and was on his knees with his hands on his head when he was shot 7 times in the back.

Andrew Heney, owner of the Freeway autoshop where Guardado worked, said the teen became frightened when deputies pulled up on him with guns drawn for no reason and so he ran.

“The police came up, and they pulled their guns on him and he ran because he was scared, and they shot and killed him. He’s got a clean background and everything. There’s no reason,” he said.

After they killed Guardado, police then confiscated the security cameras and footage. Capt. Kent Wegener, the head of the department’s Homicide Bureau, told ABC7 that investigators have taken six or seven exterior cameras from the scene, claiming two of the cameras were missing their memory cards.

A search warrant was obtained to gain access to any “web-based video or security footage from the third-party vendor who supplies the service at the scene,” Wegener said.

However, Heney disputes this claim and said police “got the warrant after they took the cameras.”

“This is the first camera they yanked off the wall,” Heney said pointing towards one of the broken devices in an interview posted on Twitter. “They broke it off and took it right off the wall,” he said as he pointed out another.

“They were just trying to be malicious and covering themselves,” he said.

“They illegally got into everything, then they had the place locked down and then they got the warrant,” he said.

The interview also contained images of one of the deputies on scene reportedly smirking at the family as they asked why their child was killed.

UPDATE: came to speak with the manager. Andres ran down the driveway, got on his knees and put his hands behind his head. Then 1 Cop shot him in the back 7 times. They broke all the cameras and took the DVR, which they pulled a warrant for after the fact. Video of this coming pic.twitter.com/CLUDUfCYBO

Also, conveniently enough for the deputies, none of them were wearing body cameras.

Fast-forward to this week, and now the family has learned that they will not be receiving the results of their son’s autopsy any time soon.

The results of the autopsy, which was likely very simple considering he had six bullet holes in him, has been placed on a “security hold” by the department, according to a statement from the coroner’s office.

“Since LASD placed a security hold on the case, the report and the cause of death cannot be released to the public,” Sarah Ardalani, the Public Information Officer for the Los Angeles County Medical Examiner-Coroner’s office, told CNN on Monday.

News of the department hiding the results of the autopsy, confiscating the video, not wearing body cameras, and killing a teenager on his knees according to witnesses, comes as Los Angeles County Sheriff Alex Villanueva promises transparency.

“Out of an abundance of caution, I reached out to @AGBecerra for monitoring of the Guardado investigation. I am committed to transparency and strengthening community faith in the investigative process,” Villanueva said in a Tweet on Monday.

Out of an abundance of caution, I reached out to @AGBecerra for monitoring of the Guardado investigation. I am committed to transparency and strengthening community faith in the investigative process.

Naturally, the family is less than pleased with the “transparency” they are receiving in this case and have obtained a lawyer  and outside investigators to look into their son’s death.

“(The family of Andres Guardado) demand, and deserve, full transparency from the Los Angeles County Sheriff’s Department regarding the facts surrounding the death of this young man,” a statement from attorney Adam Shea said.