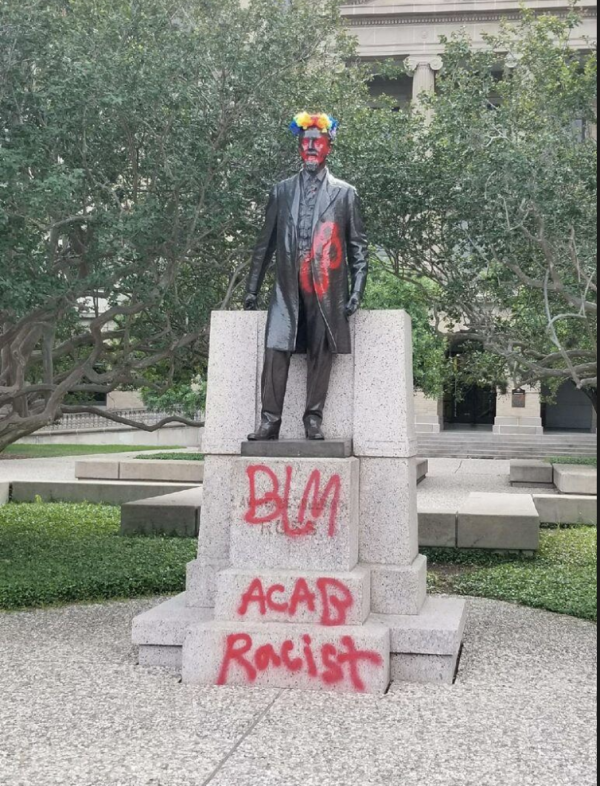 Integration of Predominately White Institutions (PWI) was always going to end with the latter assimilating to the former. Despite absolute no supporting evidence to the origins of the University of Florida’s “Gator Bait” chant being racist, the school dropped it with hardly any protest.

Why? We can’t make the black players on the roster – sometimes accounting for almost all of the black males on campus, as the University of Alabama-Birmingham found out when they dropped football but quickly brought it back – upset, or else who would run with the football, pass the football, catch the football, and play defense for our alma mater on fall Saturday’s (if you said white people, don’t you know blacks are better athletes…)?

Texas A&M quarterback Kellen Mond tweeted Tuesday night in support of removing a statue of former president Lawrence Sullivan Ross. The statue is known as “Sully” and has been on campus since 1919.

Ross, president at Texas A&M from 1891-1898, was a brigadier general in the Confederate Army and has faced claims of mistreatment of Black and indigenous people in Texas. 

Mond’s statement reminded its readers of these specific instances and noted that his role in building the university does not excuse that.

“That is like saying someone who murders half of a family, but gives the other half of the family millions of dollars and resources to be successful for the rest of their lives, should be forgiven by the family,” Mond wrote of people who forgive Ross based on his university role. “Based on your ideology, not only should you forgive the murderer, but you should also glorify the murderer.”

Mond also quoted from the Confederacy’s Declaration of Clauses, which reads, in part, “The African race … (was) rightfully held and regarded as an inferior and dependent race.”

Zach Calzada, a quarterback who backed up Mond as a freshman last season, tweeted, “Whole team got your back” in response.

Mond concluded his statement by saying, “The values of Texas A&M University do not align with RACISM, VIOLENCE, SLAVERY & SEGREGATION, but (head coach) Jimbo Fisher’s most prominent statement will always stick with me: ‘Your actions speak so loud I can’t hear what you’re saying.’ The Lawrence Sullivan Ross Statue NEEDS to be removed. Texas A&M University, I NEED to see action.”

On Monday, Texas A&M president Michael Young released astatement that discussed combatting racism at the university. Among his proposals was one to erect a statue to honor Matthew Gaines, the first Black senator from Washington County, which is just south of College Station.

All statues of white men are coming down. Every one of them.

All our traditions must be reimagined or retired, because the claim of racism is far greater than adhering to tradition or truth.

We lost our civilization because we were too afraid of being called racist and yearned to watch black athletes – who otherwise have no business being enrolled in college or the university – wear our school colors and cosplay as college students on fall Saturday’s.