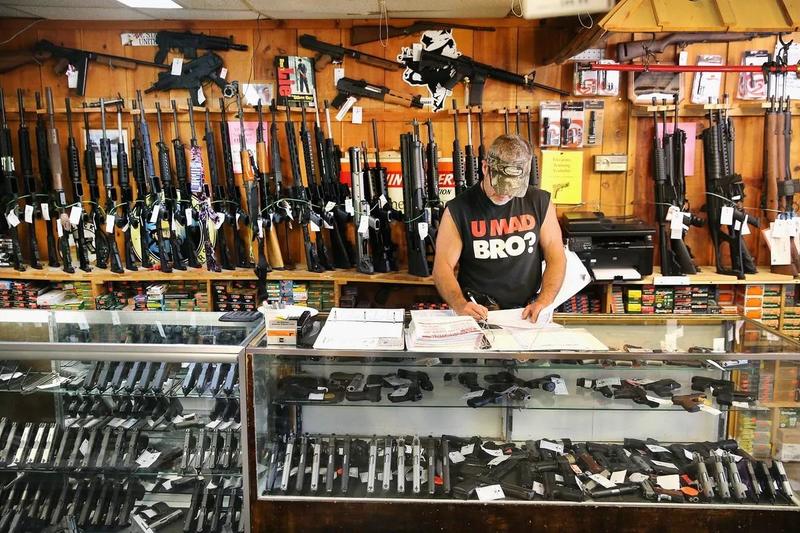 Over 40,000 Illinois residents applied for a gun permit over a two-week period this month, a jump of more than 500% over this time last year according to Illinois State Police.

“Take a full glass of coronavirus, shake in a shot of riots and another of this defund police notion, and everything goes crazy,” gun shop owner Mark Glavin told the Chicago Tribune. “Not to mention the backlog on background checks.”

The state’s mandatory 72-hour background check has stretched to more than a week for some of Glavin’s customers, putting Illinois residents in the same boat as Californians – who have a 10-day wait before they can take possession of recently bought firearms.

The firearms services bureau of the Illinois State Police is taking an average of 94 business hours — not counting holidays, weekends, the day the gun is purchased, or the day the sale is approved or denied — to process background checks, roughly a day longer than usual, according to state police spokeswoman Beth Hundsdorfer.

The bureau is responsible for issuing firearm owner’s identification cards and concealed carry licenses, as well as conducting background checks for licensed gun dealers when a sale is made. Its work started to pick up in March and has spiked in June, Hundsdorfer said. –Chicago Tribune

Between June 1 and June 17, there were over 42,089 applications for FOID cards vs. just 7,000 during the same period last year – an increase of 501%. Putting that into further context, there were 48,194 applications between December, January and February combined.

“There’s two big predictors of gun ownership — not sport-type rifle owners — but among new gun owners usually, and that is perceived risk of victimization and then a belief that the world is a dangerous place,” Ostrander continued. “And if we dig into that second one, right, the world does look like a dangerous place right now.”

Des Plaines gun store and range owner Dan Eldridge says that half of the customers scrambling to arm up are first-time buyers.

“The numbers I saw from the National Shooting Sports Foundation … said 40% of respondents to (store) surveys were new, first-time buyers. And of those, 40% are female — 40% of the 40%,” said Eldridge. “We’re tracking 150% of a typical May in firearms sales … and that’s with being open by appointment only.”

Eldridge also noted that sales of defensive ammunition, such as hollow-point bullets, were 10x as high.

“What is significant is a whole lot of people who have firearms for their house or self-defense are saying, ‘I’d better have some ammunition for this thing or it’s not going to do me any good.’” he added.

University of Illinois at Chicago associate professor of Political Science, Alexandra Filindra, says that there’s plenty of research and anecdotal evidence that many of the white, first-time gun buyers identify as politically progressive.

“It’s not so much a security concern, though they may tend to want to misidentify it as fear,” said Filindra. “But typically people who are highly anxious and afraid tend to be more supportive of gun control.”

A 38-year-old man from Dixon — who didn’t want his name used, citing employment reasons — described himself as “a very liberal Democrat” who for decades has been “for most forms of gun control politically.” But since March, he’s been waiting for his first gun permit to arrive so he can keep his family safe, he said.

“My views have recently changed, and I have accepted that the Second Amendment provides for the personal ownership and use of a firearm,” he said in an email. “The recent social unrest of a divisive president, the pandemic and dramatic rise in unemployment, and the more recent social unrest because of the way we police in this country have all been reasons that have prompted my recent application.” –Chicago Tribune

Concealed Carry gun instructor and owner of Safer USA, David Lombardo, says he’s had several callers recently who have disclosed their political beliefs while asking him for private one-on-one training because “they don’t want anyone to know they’re doing the training, let alone going to buy a firearm.”

“I have seen the emergence of a new class of students seeking training: anti-Second Amendment liberals,” he said.

Carrie Lightfoot, founder of the popular shooting blog The Well Armed Woman, said there’s nothing hypocritical about changing your views when the world around you is changing. And she’s not surprised women make up a good portion of these new gun buyers.

Women have always understood they are at a disadvantage when it comes to a male aggressor who will likely be taller, heavier and stronger. Now we are “all shaken to our core” by world events, which is why “it is only natural” women are arming themselves, she said.

“I am seeing women come to gun ownership who literally just weeks or months ago were opposed to people owning guns personally,” Lightfoot said. “Sometimes, it is in moments of personal need and through our personal concerns that our life’s context changes.” –Chicago Tribune

Lots of guns, not a lot of training

DePaul’s Ostrander points out what few are saying; first-time gun owners are eight-times more likely to accidentally shoot themselves vs. those in gun-free homes, because they lack training.

“If they feel safer having 5 pounds of metal in their home, then at least let’s try to get some basic instruction going. Some standard gun safety,” he said.