New York Times writer Nikole Hannah-Jones, who was recently handed a Pulitzer Prize for her error-ridden 1619 Project, penned an angry “racist screed” attacking all white people as “barbaric devils” and “bloodsuckers” in 1995, The Federalist reports.

In an indication of what was to come, the founder of the New York Times’ 1619 Project penned a lengthy racist screed attacking all white people in 1995.

Nikole Hannah-Jones, the lead essayist on New York Times Magazine’s 1619 Project, wrote a letter to the editor in Notre Dame’s The Observer stating that “the white race is the biggest murderer, rapist, pillager, and thief of the modern world.”

Hannah-Jones claimed that the actions of European settlers and explorers such as Christopher Columbus were “acts of devils” and likens them to Hitler.

“[The whites] lasting monument was the destruction and enslavement of two races of people,” Hannah-Jones wrote.

Hannah-Jones claims Africans arrived in North America long before Europeans, but that unlike Europeans, Africans befriended and traded with the indigenous people. She claims pyramids in Mexico are a symbol of said friendship.

She then moves to the present and argues that white people today still take advantage of other people.

“The descendants of these savage people pump drugs and guns into the Black community, pack Black people into the squalor of segregated urban ghettos and continue to be bloodsuckers in our community,” she writes.

She ends her letter by pitying the author she was responding to and claiming that white people still struggle with a supremacy complex.

“But after everything that those barbaric devils did, I do not hate them,” she wrote. “I understand that because of some lacking, they needed to [sic] constantly prove their superiority.”

Hannah-Jones’ 1619 Project, which is being taught to school children, is designed to get these very ideas across to little kids.

On Saturday, Hannah-Jones said in a now-deleted tweet that “it would be an honor” to have the Black Lives Matter riots over the past month called the “1619 riots.” 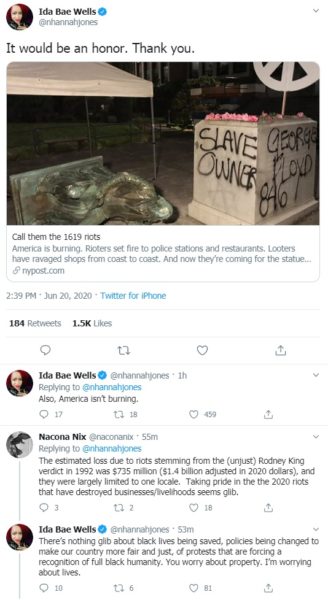 Her latest piece is a demand for reparations:

I didn't intend to write this now, but the times called for it: In this moment, the most tragic of outcomes would be that the demand be too timid and the resolution too small. If black lives are to truly matter in this country, American must pay its debt. https://t.co/uf1Zta0sZ1

Yes, we have — unquestionably.

When the Black Lives Matter organizations which were handed $1.7 billion from the wealthiest companies in America give all that money to paying the debt for the potentially more than $1.42 billion in damages for their riots maybe then we can consider talking about reparations.

That said, we’re going start with reparations for the past 50 years of crime and violence first and work our way back.