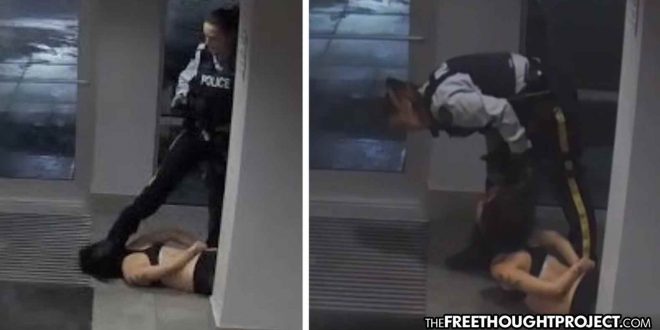 In the oft-cited dystopian novel, 1984, during the interrogation of the book’s protagonist, Winston, by O’Brien, George Orwell provides readers with the impetus behind the tyranny in his novel. That impetus is pure and unadulterated power. As O’Brien tries to break Winston’s will, he tells Winston that power is not a means to an end but the end itself.

“Always,” O’Brien says, “there will be the intoxication of power, constantly increasing and constantly growing subtler. Always, at every moment, there will be the thrill of victory, the sensation of trampling on an enemy who is helpless. If you want a picture of the future, imagine a boot stamping on a human face — forever.”

Though this was a fictional representation of what Orwell thought future might look like, readers of TFTP have seen that this figurative representation, often becomes literal. A nursing student at the University of British Columbia learned this the hard way recently after her boyfriend called the cops to check on her.

The student, Mona Wang is now suing the Royal Canadian Mounted Police officer after her boyfriend called emergency services to request a health check, and she got a boot stomping on her face instead. 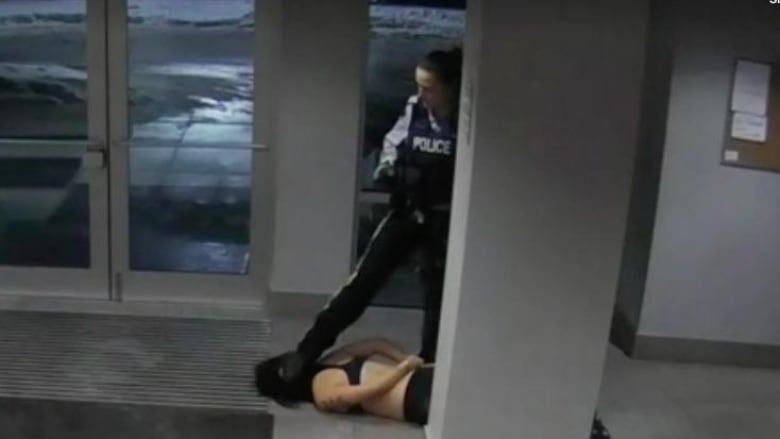 On the night of January 20, 2020, Wang had committed no crime but was experiencing mental distress when her boyfriend called for help. According to a recent lawsuit filed on behalf of the student, when police showed up to “help” her, she was semi-conscious on her bathroom floor.

The first officer to find Wang was Cpl. Lacey Browning, whose conduct according to the lawsuit was “abusive and repetitive in the extreme″ after the officer found Wang lying in the bathroom.

Instead of providing medical assistance the the young woman, according to the complaint, Browning demanded she get up.

According to the lawsuit, Browning then handcuffed Wang and dragged her out of the suite, down a hallway toward the floor’s elevator while punching her in the face. These horrific acts claimed in the lawsuit were backed up by the apartment’s surveillance camera footage.

Browning essentially kidnapped Wang without reason and refused to tell her why she was being detained, according to the lawsuit.

As the video shows, even as she is lying face down on the floor in handcuffs, the officer — seemingly drunk on her perceived power — continues to kick and stomp on the young woman. At one point, she even picks Wang up off the floor by her hair before slamming her face back down to the ground.

“So many people in the building were walking past, people I see on a daily basis. It felt so humiliating and so degrading,” Wang said. “I was of no threat to her. I had my hands cuffed behind my back, laying on the floor on my stomach.”

“As a direct, foreseeable and proximate result of Browning’s reckless and unlawful actions, the plaintiff has suffered emotional distress, humiliation, shame and embarrassment, psychological and emotional trauma,” the lawsuit states.

Naturally, Browning claims all the force used against Wang was for her own good.

In Browning’s statement, she says Wang had a history of suicide attempts, and when the officer arrived at the apartment she found the student lying on the bathroom floor with empty bottles of pills and an empty wine bottle near her, according to cbc.ca.

Browning says Wang was holding a box-cutting knife in one hand and had cuts on her arm and chest. None of these cuts are visible on Wang — who is wearing only a sports bra — nor can we see any blood in the video.

Browning admits that when she found Wang she was unresponsive and got the box cutter away from her easily, but claimed she had to start hitting her because she became combative afterward.

The department believed Browning’s version of events until the lawsuit sought to have the surveillance camera footage released showing Wang being dragged by her handcuffs down the hall and repeatedly kicked and stomped.

Browning has since been placed on administrative leave.

Below is a disturbing video showing what is possible when you call the police for help.

Courtesy of TFTP
Matt Agorist is an honorably discharged veteran of the USMC and former intelligence operator directly tasked by the NSA. This prior experience gives him unique insight into the world of government corruption and the American police state. Agorist has been an independent journalist for over a decade and has been featured on mainstream networks around the world. Agorist is also the Editor at Large at the Free Thought Project. Follow @MattAgorist on Twitter, Steemit, and now on Minds.