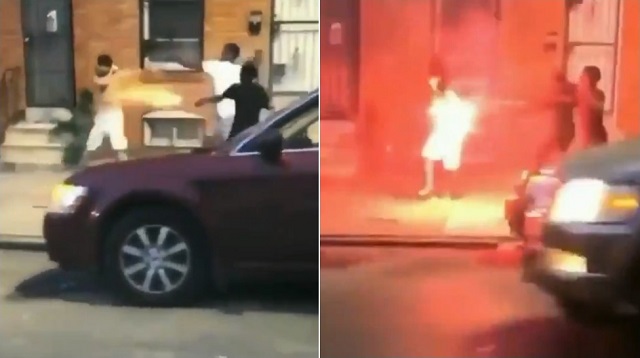 Video out of Baltimore shows a mob of African-American youths attacking a white man by relentlessly shooting fireworks at him at point-blank range and targeting his face while laughing hysterically.

Meanwhile, the other day in Southwest Baltimore we see a young man enjoying his "White privilege" pic.twitter.com/wrkFzL2Xpa

In a series of videos recently shared to social media, about half a dozen assailants – including one who appears to be a child – are shown shooting fireworks into a parked car to lure out a man hiding inside.

The victim was soon forced out of the vehicle and the assault then continued in the street, with the attackers setting off dozens of salvos, many of them hitting the man directly in the face from just inches away as he unsuccessfully tried to block the shots with his hands.

The assailants, who are seen gleefully laughing throughout the attack, also made use of a trash can at one point, putting it over the victim’s head as they continued to pelt him with pyrotechnics.

More from WBALTV (the only US media outlet which appears to have covered the story):

“They may look like fireworks, but they are not they are commonly known as M80s, M1000s or M100s. These devices are illegal explosive devices, and they are powerful enough to cause severe amputations and death,” Maryland State Fire Marshal Brian Geraci said.

Fireworks that explode in the air are illegal in Maryland — even possessing fireworks in Baltimore City is illegal. […]

Baltimore City police did not respond to an inquiry from 11 News.

WBALTV reported that residents have been complaining about illegal firework usage “for weeks.”

Earlier this week, video was shared of a similar fireworks attack on a 66-year-old homeless man sleeping on the street in Harlem.

Earlier yesterday morning, a homeless male was sleeping on the sidewalk in front of 67 Lenox Avenue, in the confines of the 28 pct, when he was attacked. The male pictured above threw a lit firework on him, which exploded causing burns to the victims back. pic.twitter.com/gUZhbLznGT

According to the media and Senator Lindsey Graham, black men are terrified to go out in the streets for fear they could be shot by racist white police officers at any moment.

Do these men look terrified to you?