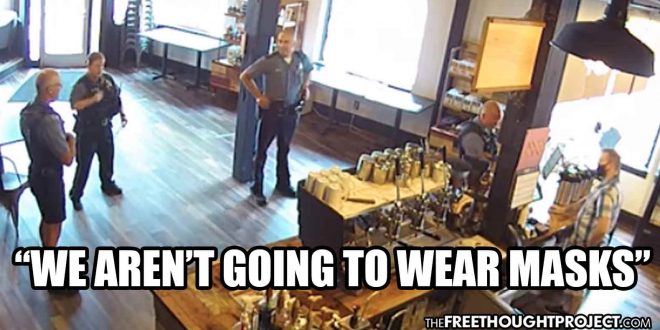 Oregon — As COVID-19 cases rise across the nation, more than 20 states have imposed mandatory mask laws, forcing citizens to wear masks in public, or else. On Wednesday, Oregon Gov. Kate Brown handed down the threat of hefty fines and even jail time for citizens who refuse to wear a mask in public. While many people praised the mandate, others did not, and, as the video below shows, the ones who are tasked with enforcing the mask laws, aren’t wearing them.

“This is enforceable by law, at both a business and an individual level,” Brown said. “As with all orders I have issued to keep people safe and save Oregon lives, violation of the order can carry a Class C misdemeanor as a penalty.”

Imagine being thrown in jail for 30 days for not putting a piece of cloth over your mouth and nose. This is 2020 ladies and gentlemen.

Brown said they are working with business, who are scared of enforcing the rule over fears of lawsuits.

“We’re working with businesses before we move to enforcement,” the governor said. “I’m asking all of us to take this face covering requirement very, very seriously, to protect themselves and others.”

According to KTVZ, the governor noted the exceptions in the order, as masks are not required for children under 12 (though parents are encouraged to assist those 2 and older to help them wear them when possible), as well as at locations where one is eating or drinking,  or for those who are exerting themselves at gyms and the like, as long as six feet of physical distance are maintained.

On Thursday, video surfaced from inside a Corvallis coffee shop, which showed multiple Oregon State Police troopers — who did not fit any of the above exceptions — clearly unconcerned with the governors order.

The troopers reportedly defied the the store’s assistant manager, Travis Boss who told them that it was their policy that all customers wear masks.

“Governor Brown has no authority to take our civil liberties. We aren’t going to wear masks,” the trooper allegedly said, according to a written statement from Boss provided to Oregon Live.

The irony of the troopers claiming that the governor has “no authority to take our civil liberties” cannot be understated. This is coming from a person whose department has tear gassed, pepper sprayed, beaten, and shot protesters for practicing their constitutionally protected civil liberties in recent weeks during police brutality protests in the state.

After refusing to wear a mask, the trooper placed his order and then gave his opinion on the governor’s mandate requiring masks to be worn inside public spaces.

After the first trooper defied the manager’s request, three other troopers came in, and also refused to wear masks. Boss told Oregon Live he felt compelled to fulfill their drink orders because they were in uniform, even though he said he had sent other patrons away earlier for not wearing masks.

After the incident, the coffee shop reported the troopers’ behavior to to the Oregon State Police, who responded by saying they are launching an internal investigation.

“The involved trooper has been placed on administrative leave,” Fox said in a statement. “OSP is early in the investigation, but if found to be true, we are thoroughly disappointed and expect our troopers to follow the governor’s executive orders and be examples in the community.”

The video below does not lie. It is true that the troopers are refusing to wear masks and are being served anyway.

Fining or arresting people for not wearing a mask certainly borders on the verge of tyranny and troopers who refuse to extort, kidnap, or cage individuals who may not be able to wear a mask for health or psychological reasons is a good thing.

That being said, however, private establishments that require masks are private. You have no right to enter someone’s private property do as you wish by disobeying their requirements while demanding service. Police officers violating the property rights of the coffee shop owner by refusing to obey their rules is unacceptable — regardless of some governor’s decree — and, it speaks to the nature of their above the law mentality.