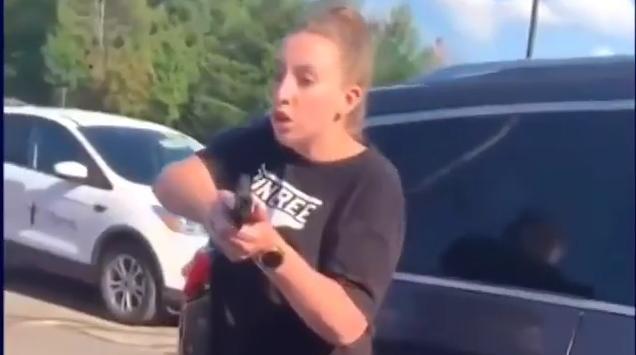 The mainstream media is right there to provide cover and propaganda for the Black Lives Matter provocateurs.  In one of the latest evidences of this kind of “reporting” by the MSM, a video was created showing what was presented by the media concerning a couple leaving a local Chipotles Restaurant when a couple of loud-mouthed, BLM provocateurs started in on them, calling them “racists.”

A husband and wife are facing felony charges after an escalating shouting match outside a Michigan Chipotle restaurant Wednesday night. Videos of the incident cited by police show a woman, who had just been called racist, pointing a handgun at a Black family.

Jillian Wuestenberg, 32, and Eric Wuestenberg, 42, were each charged with one count of felonious assault, which is punishable by up to four years in prison.

Eric Wuestenberg, who is identified on the Oakland University website as a veterans support services coordinator, also was fired from his job.

“We have seen the video and we deem his behavior unacceptable,” university spokesman Brian Bierley said, adding he “has been notified that his employment has been terminated.”

In Thursday news conference, Oakland County Sheriff Michael Bouchard said the suspects each had legal handguns and concealed pistol licenses, but the charges stem from them using their guns to threaten the victims.

No gunshots were fired, and there were no injuries in the incident, Sgt. Dale Brown said.

Authorities are aware of two videos of the incident, Bouchard said. They depict the couple — who, over the course of the videos, enter their vehicle and leave the scene — and a mother and her two daughters who remain outside the vehicle.

In all of this, the couple is made out to be the bad guys, but nothing could be further from the truth.  Take a look at the video below and see how it was edited and what the BLM provocateurs were attempting to do to this couple.

The women were harassing the couple due to allegedly accidentally bumping into one of the woman’s daughters.  Of course, the MSM attempted to side with the provocateur who called the woman and the man “racists.”

As you can see from the other camera angle, this was all blown out of proportion from the blowhard BLM provocateur.

Lake Orion, Michigan– woman pulled a gun on aggressive BLM protesters after a heated confrontation at a Chiptole restaurant. Angry BLM protesters circled around the innocent woman and her husband in an intimidating manner, peppering the woman with insults saying “white racist”

As the victim and her husband tried to retreat, one BLM protester circled around the back of their vehicle….. The BLM protester attempted to physically stop her vehicle by standing in the way of the vehicle while the victim’s reversed out of the parking stall…The BLM protester tried to blame the woman that is actually not driving the vehicle and is a passenger. The BLM protesters accused the innocent victims of trying to run them over on purpose. At that point the victim felt threatened and pulled her legally owned gun on the protesters…. screaming at them to back away and leave her alone.

“My suggestion to friends and family,” Oakland County Sheriff Michael Bouchard said, “is that if you can avoid a confrontation, do so. Nothing is worth escalation it to where someone gets hurt or killed.”

Well, who was escalating things, sheriff?  The woman tried to get in her car and leave and it was the unnamed provocateur who continued escalating things with both her language and her verbal assaults.  Of course, Sheriff Bouchard didn’t arrest her and charge her nor did the mainstream media even name her.

Then, there were politicians who had to get in a dig for gun confiscation.

State Sen. Rosemary Bayer (D-Beverly Hills) said, “There is nothing acceptable about what happened in Orion Township last night at the Chipotle.  It is abhorrent to think that some in this country have such a sense of self-righteousness and entitlement that the idea of pulling a gun out on an unarmed child and her mother is okay.”

Really?  And some think they have a sense of self-righteousness to harass and taunt and verbally assault others because of their skin color?  Is that OK with you, Ms. Bayer?  If not, why didn’t you call out both sides on the matter?

Thankfully, people are able to see clearly what took place here and who was actually escalating things.