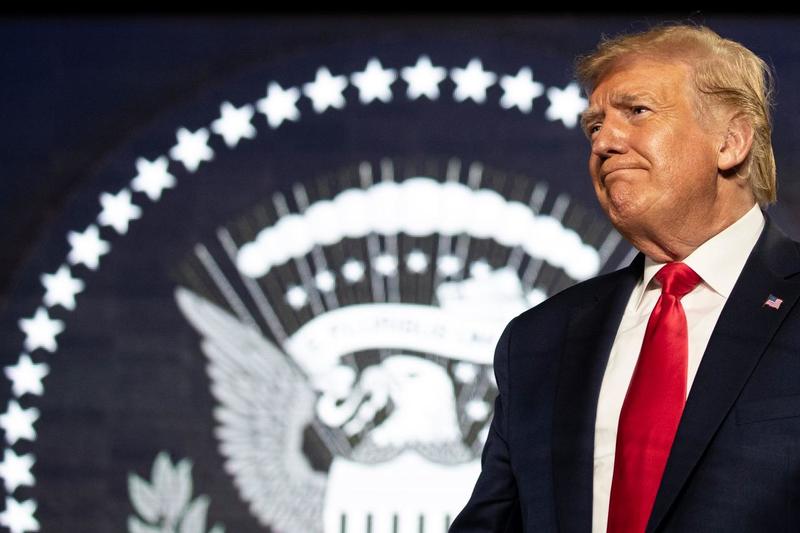 President Trump kicked off Independence Day weekend on Friday by delivering a fiery address in front of Mount Rushmore – a site undoubtedly chosen as left-wing protesters shift focus from removing confederate statues to destroying monuments of US presidents.

“Angry mobs are trying to tear down statues of our founders, deface our most sacred memorials, and unleash a wave of violent crime in our cities,” said Trump – who added “There is a new far-left fascism that demands absolute allegiance. If you do not speak its language, perform its rituals, recite its mantras, and follow its commandments then you will be censored, banished, blacklisted, persecuted, and punished. Not gonna happen to us.”

“Make no mistake, this left wing cultural revolution is designed to overthrow the American revolution,” Trump told the crowd of more than 7,000. “Our children are taught in school to hate their own country.”

Trump then announced that under an Executive Order signed last week, “people who damage or deface federal statues or monuments will get a minimum of 10 years in prison.”

Trump then vowed that Mount Rushmore will “never be defaced.”

“Mount Rushmore will stand forever as an eternal tribute to our forefathers.” pic.twitter.com/ruAY8iUKW4

Trump then slammed those who would teach children “to believe that the men and women who built [America] were villains.”

The radical view of American history is a web of lies, all perspective is removed, every virtue is obscured, every motive is twisted, every fact is distorted and every flaw is magnified until the history is purged and the record is disfigured beyond all recognition. This movement is openly attacking the legacies of every person on Mount Rushmore. They defiled the memory of Washington, Jefferson, Lincoln and Roosevelt. Today we will set history and history’s record straight.

The president then delivered highlights of the accomplishments of all four presidents on Mount Rushmore – describing why they represent the “best of America.”

“They were American giants in full flesh and blood. Gallant men, whose intrepid deeds unleashed the greatest leap of human advancement the world has ever known,” said Trump, adding “Tonight, I will tell you — and most importantly, the youth of our nation — the true stories of these great men” (via Breitbart).

From head to toe, George Washington represented the strength, grace, and dignity of the American people. From a small volunteer force of citizen farmers, he created the Continental Army out of nothing and rallied them to stand against the most powerful military on earth through eight long years. … After forcing the surrender of the most powerful empire on the planet at Yorktown, General Washington did not claim power, but simply returned to Mount Vernon as a private citizen. When called upon again, he presided over the constitutional convention in Philadelphia and was unanimously elected our first president. … When he stepped down after two terms, his former adversary King George called him the greatest man of the age. He remains first in our hearts to this day. For as long as Americans love this land, we will honor and cherish the father of our country, George Washington

Thomas Jefferson, the great Thomas Jefferson was 33 years old when he traveled north to Pennsylvania and brilliantly authored one of the greatest treasures of human history, the Declaration of Independence. He also drafted Virginia’s constitution and conceived and wrote the Virginia Statute for Religious Freedom, a model for our cherished First Amendment. After serving as the first secretary of state and then vice president, he was elected to the presidency. He ordered American warriors to crush Barbary pirates. He doubled the size of our nation with the Louisiana purchase, and he sent the famous explorers Lewis and Clark into the West on a daring expedition to the Pacific Ocean. He was an architect, an inventor, a diplomat, a scholar, the founder of one of the world’s great universities, and an ardent defender of liberty. Americans will forever admire the author of American freedom.

The savior of our union was a self-taught country lawyer who grew up in a log cabin on the American frontier. The first Republican president, he rose to high office from obscurity based on the force and clarity of his anti-slavery convictions. He signed the law that built the transcontinental railroad. He signed the Homestead Act, given to some … ordinary citizens, free land to settle anywhere in the American West. And he led the country through the darkest hours of American history, giving every ounce of strength that he had to ensure that government of the people, by the people, and for the people did not perish from this earth. He served as commander in chief of the U.S. armed forces during our bloodiest war. … Ultimately his determination to preserve our nation, and our union cost him his life. For as long as we live, Americans will uphold and revere the immortal memory of President Abraham Lincoln.

Teddy Roosevelt exemplified the unbridled confidence of our national culture and identity. He saw the grandeur of America’s mission in the world, and he pursued it with overwhelming energy and zeal. As a lieutenant colonel during the Spanish American War, he led the famous rough riders to defeat the enemy at San Juan Hill. He cleaned up corruption as police commissioner of New York City then served as the governor of New York, vice president, and at 42 years old, became the youngest ever president of the United States. He sent our great new naval fleet around that world to announce America’s arrival as a world power. He gave us many of our national parks, including the Grand Canyon. He oversaw the construction of the all inspiring, Panama Canal, and he is the only person ever awarded both the Nobel Peace Prize and the Congressional Medal of Honor. He was American freedom personified. And for that the American people will never relinquish the bold, beautiful and untamed spirit of Theodore Roosevelt.

Trump also announced on Friday that he would sign an executive order for a new monument which pays tribute to “giants of our past,” and will establish a “National Garden of American Heroes” described as “a vast outdoor park that will feature statues of the greatest Americans who ever lived.”