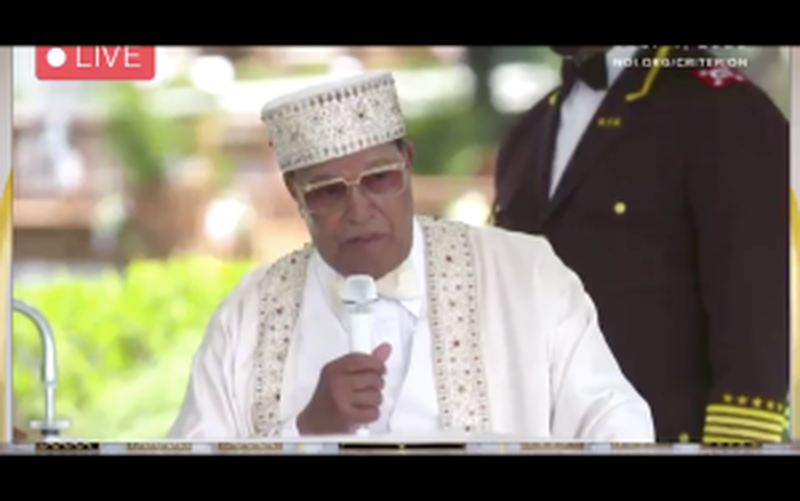 It is bad enough when you become a political rally cry for the right as a man trying to destroy our economy or instill fear into the nation.  Now, Dr. Anthony Fauci is being called a mass murderer who, with the cabal of Bill and Melinda Gates, are seeking to “depopulate the Earth.” That is hardly the most deranged thing that Nation of Islam leader Louis Farrakhan, 87, has uttered, but it may be the most dangerous. Farrakhan is encouraging people to refuse vaccinations, a problem that is already causing world health leaders concerns in Africa.  This is viewed as the new “epicenter” for the pandemic with Africans facing a threat with the need to protect hundreds of millions of Africans.  Health officials will need their cooperation but they have now heard from Farrakhan who has declared that, if they want to live, “Do not take their medication.”

In this Fourth of July remarks, Farrakhan declared that

They’re making money now, plotting to give seven billion, five-hundred million people a vaccination. Dr. Fauci, Bill Gates and Melinda — you want to depopulate the Earth. What the hell gave you that right? Who are you to sit down with your billion to talk about who can live, and who should die?

… I say to my brothers and sisters in Africa, if they come up with a vaccine, be careful. Don’t let them vaccinate you with their history of treachery through vaccines, through medication.”

He added “That’s why your world is coming to an end quickly, because you have sentenced billions to death, but God is now sentencing you to the death that you are sentencing to others.”

This could not come at a worst time for Africa which could face a devastating loss of life from this pandemic if officials cannot get cooperation in accepting the developing vaccines.

I grew up in Chicago and watched local and national figures avoid direct confrontations with Farrakhan throughout the ’70s, ’80s, and ’90s despite his hateful views. Years of enabling this virulent anti-Semite has allowed him to foster a worldwide following. Now, he is combining his signature conspiracy theories to a world pandemic in a way that could cost millions of lives.  Farrakhan has flourished due to mixed signals from leaders, including appearances with him by leaders like current Minnesota Attorney General (and former Democratic National Committee leader) Keith Ellison. (After anti-Semitic comments in 2018, some of these figures did publicly criticize Farrakhan). Figures like the Rev. Al Sharpton and the Rev. Jesse Jackson have repeatedly appeared with this race-baiting maniac. Indeed, the failure to denounce Farrakhan was previously an attack by Hillary Clinton against Barack Obama.  Yet, both Bill and Hillary Clinton were criticized for appearing at a funeral with Farrakhan.

In truth, few of these leaders can be fairly criticized as supporting Farrakhan’s views and many have criticized such comments.  Indeed, his support is hardly helpful for most politicians, including his statement that he likes what he sees in Donald Trump.  However, he still seems to linger on the edges of our politics and still has defenders among influential figures.  Most recently, CNN’s Jake Tapper was told by actor Ice Cube to “Watch your mouth Jake” after Tapper tweeted that “Farrakhan is a vile anti-LGBTQ anti-Semitic misogynist. Why is a Fox channel airing his propaganda?”

Figures like Juan Williams have criticized the political use of Farrakhan and his connections to Democratic leaders as a political cudgel.  He correctly points out that many leaders did denounce Farrakhan’s anti-Semitic comments. However, it is also true that Farrakhan is dismissed as a fringe figure when he clearly holds sway with millions of people.  While it is true that he should not be used to unfairly paint others as a sympathizers, he has highlighted his association with many leaders and it is important for society as a whole to continue to denounce his hateful and unhinged rhetoric.

Claiming that Dr. Fauci is the secret leader of a global genocide conspiracy would ordinarily be comical if it were not for the fact that millions of Africans could die from this advice.  Farrakhan is taken seriously by many around the world, even in denouncing Bill and Melinda Gates who have spent fortunes on health and development projects in Africa.

Farrakhan is no joke.  He is not a clown.  His rhetoric has always been dangerous and requires continuing outcry from across our political spectrum. What he is now declaring in Africa is a real threat to the very existence of African communities and culture as they face a horrific pandemic spread.