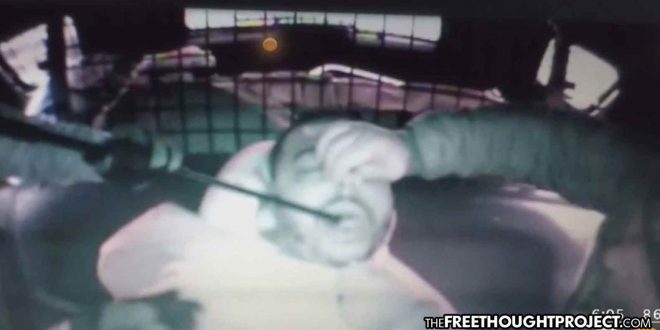 UPDATE: It was just announced that the cop who blew the whistle on the death of Eric Lurry in Joliet police custody was stripped of his police powers and placed on administrative leave Monday.

Cop who blew whistle on death of #EricLurry is stripped of his badge. “That’s what you get,” says one source for going against the “blue wall of silence” Lurry had nose pinched shut for 98 seconds in cuffs. Police Sgt Javier Esqueda, a 27 year vet fighting for job. @cbschicago pic.twitter.com/E61I1pGqcQ

Joliet, IL — Joliet police Sgt. Javier Esqueda is a good cop. We can say this with certainty because he proved it by refusing to stay silent about the alleged criminal acts of his fellow cops and risked his career to shine light into darkness. He watched a video of his fellow officers appear to suffocate a man until he died and decided that enough was enough.

His name was Eric Lurry.

On January 29, police targeted Lurry because they suspected him of having a substance deemed illegal by the state.

According to CBS 2, Nicole Lurry said her husband had just finished getting his license to be a barber, and was enrolled in school to become an instructor at the barber school. But in late January, the 37-year-old – who had served time before for drugs – got arrested again.

When police arrested Lurry, they put him in the back of a squad car and suspected him of putting drugs in his mouth. Because the state claims the right to kidnap, cage, beat, and kill people over arbitrary substances, when Lurry was put in the back of the car, he was essentially tortured.

In an attempt to get Lurry to spit out the drugs, police held his nose closed while shoving a baton in his mouth and slapping him. This torture went on for nearly two entire minutes until Lurry fell unconscious and eventually died.

“He was suffocating,” Sgt. Esqueda said. “In my opinion, anybody would suffocate in that situation.”

For five months, the department kept the video secret while clearing the cops involved. Nicole Lurry never knew of the video’s existence until Esqueda blew the whistle after he came across it.

Adding to the egregious act of hiding such damning evidence is the fact that the audio had been turned off after the officers were seen slapping Lurry.

“It was almost like the supervisor looks off and says something to somebody, and then you hear the sound cut out. That’s what alerted me that possibly, they were trying to get rid of evidence,” Esqueda said.

“So there was a deliberate, initial act to turn off the audio or get rid of the audio?” CBS 2 reporters asked Sgt. Esqueda.

“There had to be. There’s no way that can happen,” he said.

Naturally, Esqueda is scared of retaliation and when asked if he might lose his job for leaking the video, he said that is a possibility but he couldn’t remain silent.

“There’s some fear. When you see stuff like this, you have to come forward. You can’t sit there and be quiet, because then, we’re just part of the problem,” he said.

If all cops had this resolve, America would be in a much better place than where we currently find ourselves.

Surprisingly enough, Esqueda has the support of the Black Police Officers Association, which includes about 30 officers and supervisors of all races.

“He’s a member, and we’re going to back him,” said Dave Jackson, president of his department’s Black Police Officers Association.

“If someone’s doing the right thing, we’re going to stand right there with them. Sgt. Esqueda has been held as a well-respected supervisor and United States Marine and has served his country and his community proudly,” Jackson added.

Jackson also called Esqueda “brave as well as a hero” for coming forward.

“Without Sgt. Esqueda drawing attention to this death to city officials, this in-custody death may still be pending,” Jackson said, according to Patch.

Esqueda told reporters that he leaked the video because he wanted to prove that not all cops are bad.

“In light of everything that’s’ been happening – you know George Floyd really had a lot of us police officers. When we saw that video, a lot of us cried. People don’t believe that. But the thing is, there are a lot of good officers out of 750,000. Not everybody is a bad cop. Most cops that I know were upset by George Floyd,” he said.

Obviously not all cops are bad people. However, if we look at Esqueda’s case, all the officers involved in Lurry’s death, the supervisors, the chief, literally everyone but Esqueda was willing to look the other way. This would imply that all the cops in the Joliet police department are bad — except for Esqueda.

Even officials outside the police department whose “investigation” found that depriving Lurry of air for nearly two minutes played no role in his death.

Courtesy of TFTP
Matt Agorist is an honorably discharged veteran of the USMC and former intelligence operator directly tasked by the NSA. This prior experience gives him unique insight into the world of government corruption and the American police state. Agorist has been an independent journalist for over a decade and has been featured on mainstream networks around the world. Agorist is also the Editor at Large at the Free Thought Project. Follow @MattAgorist on Twitter, Steemit, and now on Minds.