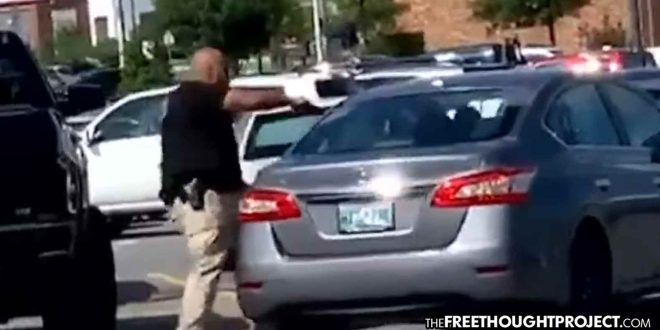 Del City, OK — Over the weekend in Del City, Oklahoma, an off-duty police officer fired at least 12 rounds at a man who was suspected of shoplifting from a Wal-Mart store. The suspect, who was later identified as 28-year-old Kenneth Lee Simmons, reportedly paid for multiple items and had a receipt, but was suspected of having more items in his cart than he actually paid for.

It is unclear whether or not he was actually shoplifting, but the officer has come under criticism because the punishment obviously does not fit the crime.

The off-duty officer, who has not been named, was nearby and heard a call on his radio about a potential shoplifting at the Wal-Mart, so he decided to get involved. When the officer tried to confront Simmons, he attempted to back away in his car and flee. However, the officer unloaded his magazine into the car, firing almost a dozen shots as the car pulled away. It was clearly a case of attempted murder.

Miraculously, Simmons survived but was seriously injured and taken to a nearby hospital. Police say that he is expected to be “OK,” but they were not clear on whether or not he would be making a full recovery. The officer responsible for the shooting works with Langston University, but officials with the university have said that he was not on duty at the time of the incident.

If the officer was off-duty, it is possible that Simmons had no clue that he was dealing with a police officer. He could have been under the impression that he was being robbed or otherwise attacked by a total stranger. It is also not clear whether or not the shooter identified himself as a law enforcement officer before the encounter escalated.

Witnesses on the scene were shaken up by the incident, and were worried that they could have been hit by one of the bullets. John Hamilton a witness who was in the parking lot during the shooting said that he could have been hit if he was standing closer to the car.

“The suspect jammed the car into reverse and reversed the car as such and the officer jumped out, stood behind the car and shot about five or six more times. I was standing at a 45 degree angle from where the shots were fired,” said Hamilton. “If I was in the wrong place, I could have been a target as well,” Hamilton explained.

A witness who did not want to be identified told KOCO 5 that police accused Simmons of stealing a television, but he didn’t have a television in his cart. Other sources like TMZ reported that Simmons was accused of stealing a barbecue. His family told reporters that he had a receipt and didn’t walk out of the store with anything he didn’t pay for.