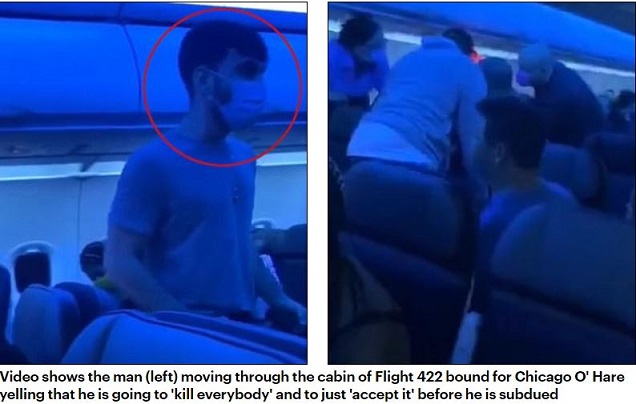 Reprinted with permission from Fellowship of the Minds…

The rotten fruits of the #BlackLivesMatter movement.

A man, who appears to be white, screamed at passengers in an Alaska Airlines flight that he would “kill everybody on this plane unless you accept Jesus was a black man.”

Leah Simpson reports for Daily Mail that last Saturday night, July 11, 2020, 20 minutes after Alaska Airlines Flight 422 took off from Seattle-Tacoma airport, en route to Chicago, the plane was forced to make an emergency landing in Seattle after a passenger threatened to kill everyone on board.

Video footage filmed by a passenger shows the man, wearing a face mask, moving through the cabin yelling: “I will kill everybody on this plane unless you accept Jesus was a black man! Accept it, and die in the name of Jesus!”

Three passengers, including a law enforcement officer, and a flight attendant helped to subdue the man.

In the video clip obtained by NBC’s King 5 station, the men are seen following the suspect down the aisle while everyone else is buckled in during the ascent. One man then shoves the suspect and is joined by a second gentleman who helps to subdue him, as a flight attendant rushes over with what appears to be zip ties to restrain his wrists.

A man detaining the suspect is heard yelling at him to stay on the ground and one is seen reassuring passengers that everything will be okay. Cabin crew then announce the flight will be landing at the nearest airport.

Following the emergency landing, the man was taken off board by Port of Seattle police. Reportedly cooperative and booked into King County Jail, the terrorist was not immediately charged with a crime but is being investigated on suspicion of harassment. His motivation was unclear.

Read the rest at Fellowship of the Minds…