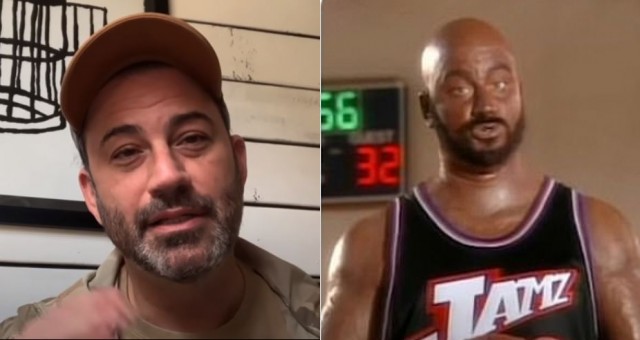 Late-night entertainer and not-so-funny comedian Jimmy Kimmel got busted for doing exactly what he claims to hate: Mimicking black people and using the “N-word” in older skits, Duncan Smith at TNS reports.

Now that he’s been exposed — not before, mind you, but now — he’s oh-so-sorry.

“There is nothing more important to me than your respect and I apologize to those who were genuinely hurt or offended by the makeup I wore or the words I spoke,” he said, according to the UK’s Daily Mail.

He went on to claim that he’s “evolved and matured” (heard that from a Leftist entertainer before?) and that he is just so sorry, sorry, sorry.

“I have long been reluctant to address this, as I knew doing so would be celebrated as a victory by those who equate apologies with weakness and cheer for leaders who use prejudice to divide us. That delay was a mistake,” he added.

No. He was ‘long reluctant’ because he was hoping no one would notice or bring it up.

His statement came as he faced a new race storm after audio emerged of him in recent days admitting to imitating Snoop Dogg for a 1996 Christmas album in which he says the n-word multiple times.

In the song, Kimmel can be hearding rapping: ‘Me and my n***er down in LBC, we’ll smoke that motherf***er Christmas tree.’

The track includes the racial slur several times, including ‘fat n***er in a sleigh giving sh*t away’ and also ‘n***er in the manger.’

Kimmel has also come under fire for wearing blackface in TV sketches dating back to the 90s in which he impersonated the likes of NBA player Karl Malone and Oprah Winfrey.

‘On KROQ radio in the mid-90s, I did a recurring impression of the NBA player Karl Malone. In the late 90s, I continued impersonating Malone on TV. We hired makeup artists to make me look as much like Karl Malone as possible,’ he said on Tuesday.

‘I never considered that this might be seen as anything other than an imitation of a fellow human being, one that had no more to do with Karl’s skin color than it did his bulging muscles and bald head.

‘I’ve done dozens of impressions of famous people, including Snoop Dogg, Oprah, Eminem, Dick Vitale, Rosie, and many others. In each case, I thought of them as impersonations of celebrities and nothing more.

‘Looking back, many of these sketches are embarrassing, and it is frustrating that these thoughtless moments have become a weapon used by some to diminish my criticisms of social and other injustices.’

Then he said this: “I love this country too much to allow that. I won’t be bullied into silence by those who feign outrage to advance their oppressive and genuinely racist agenda.”

Yeah, and uh, who would those people be, huh Jimmy? Democratic Virginia Gov. Ralph Northam, who posed either in blackface or a KKK outfit for his medical school yearbook?

Or any comment perceived as ‘racist and bigoted’ made by President Trump?

What a genuine, Grade A, gargantuan hypocrite Kimmel is.

But his Leftist entertainment types, the mainstream media, and Democrats will, of course, allow him to escape unscathed because they’re gargantuan hypocrites, too.

Portions of this article originally appeared at The National Sentinel and were republished with permission.

*Some additions were made by Dino Porrazzo/RWT