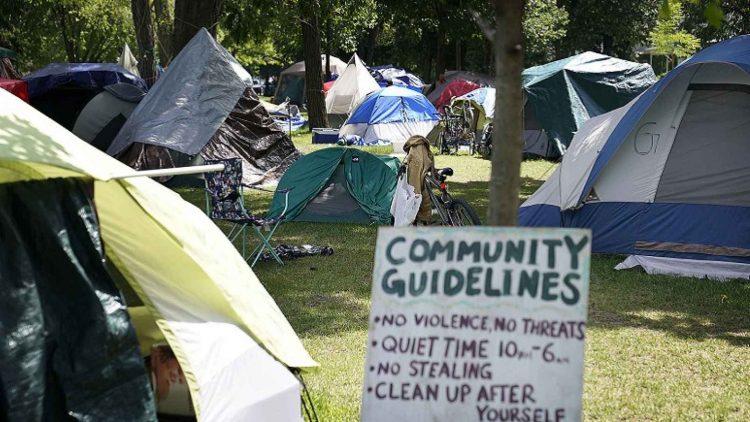 Last month, the New York Times brought its readers the heartwarming story of the Powderhorn neighborhood in Minneapolis whose residents had decided not to call the police.

Powderhorn residents had taken that message to heart and refused to call the police.

A few days later, a “juvenile” girl was assaulted. The Associated Press reported that “the people who took the victim to the hospital did not call police.”

By July, the encampment had grown to 800 people and 3 sexual assaults.

The oppressive system of “white supremacy” was being dismantled one rape at a time.

The Powderhorn Park encampment really took off when the Minneapolis Park and Recreation Board of Commissioners declared that the city’s parks were now “sanctuaries” for anyone who wanted to live in them. The resolution cited Governor Walz’s declaration of a “peacetime emergency” which banned removing homeless people from anywhere they wanted to be.

Since then, 38 more Minneapolis parks have been turned into tent cities, and of these, Powderhorn Park is the worst. The park version of CHAZ began with the Black Lives Matter riots after George Floyd’s death when the Sheraton Minneapolis Midtown Hotel  was taken over, renamed the Sanctuary Hotel, and filled with homeless vagrants by lefty activists.

The Sheraton was being repatriated from its Indian-American owner by indigenous white lefties and the minority hotel owner had been “confronted with the alternative of evacuating his hotel and having it possibly burned down.”

The lefties quickly grew bored or frightened as the former Sheraton was overrun with “rampant drug use and sales”, piles of garbage and overdoses. There were fights, drug deals, and even a fire in one room. The hotel was cleared and the encampments headed to Powderhorn.

So did the drug dealing, the overdoses, the violence, and the sexual assaults.

Two girls and one woman have been assaulted. But an activist insisted that rapes, “can happen in any park.”

And two underage girls being assaulted in a park can happen at any time. So can a man tracking down a woman, after previously assaulting her because he thought she was hiding heroin from him, and groping her while pointing a knife at her. And fights with crowbars and hatchets can break out at any time, in any park, once you get rid of the police.

But, even though it reinforced white supremacy, someone called 911. This wasn’t that unusual, because 911 calls had tripled.

Despite Lisa Bender, some people weren’t checking their privilege and were calling the cops. And the park police were dealing with “assaults with blunt objects, a fentanyl overdose, and someone being chased by others with guns and baseball bats.”

Those are the sorts of things that could happen in any park… occupied by junkies.

Minneapolis officials have been steadily denying that dumping hundreds of vagrants in the park could possibly lead to crime.

“When we talk about crimes that happen here, these are not new crimes,” Minneapolis Park Board Commissioner AK Hassan insisted. As a Somali immigrant, he claimed that he won’t vote to evict anyone. “Let’s not find excuses.”

Hassan, a Rep. Ilhan Omar ally, had praised the vote to defund the police as an “opportunity to reimagine how we approach public safety, not only for our city but the entire country.”

The reimagining is underway in Powderhorn Park.

“It feels like something really bad is about to happen every second of the day. And you don’t know what it is. And so every explosion, whether it’s a firework or a gunshot or someone screaming or whatever, you just – I feel chest pain constantly now,” Angelina Roslik, a local resident who works as a waitress, told NPR.

“When you have two juvenile females raped, an adult female raped, domestic violence with a knife and the suspect has an arrest warrant for sexual assault, you have a problem in that park,” a former Minneapolis police officer noted.

In response to the spiraling violence at Powderhorn Park, Commissioner Londel French urged people to get to know the vagrants and junkies. “There are some real issues about sanctuary, and I think the way we fix those issues are by having conversations with not only the neighbors and homeowners who live around Powderhorn, but some of the residents of the sanctuary and come up with some solutions to some of the issues that we’re having.”

These hypothetical conversations could involve the drug dealing, prostitution, needles, stolen cars, bodily fluids, and other benefits of having a homeless encampment next door.

French, a Bernie Sanders supporter, had run for office, vowing that he would use the Park Police to test out “new ideas for how policing can engage our communities. Specifically, I will work to ensure that the Minneapolis Park Police to use methods of restorative justice.”

It’s unclear how much the two raped girls are benefiting from French’s restorative justice.

The Minneapolis Park and Recreation Board had voted to cut ties with the Minneapolis Police Department, and banned Park Police from responding to non-violent police calls. It began designing a new green uniform for park cops even as it turned the parks into violent hellholes.

And the 33 officers of the Park Police, who don’t have their new green uniforms yet, are in charge of the crisis. But 33 officers are no match for hundreds of junkies and criminals.

In one day, the Park Police dealt with a sexual assault and a fight over a stolen bicycle that was nearly settled with a hatchet. Another day saw a fight with a crowbar over a tent.

“The Park Board has a small enough police force that we can actually make some real change,” French had vowed. “If we don’t do it the right way, our communities burn.”

The change is here.

A park bench in Powderhorn Park had already been set on fire. Twice.

A Minneapolis Park and Recreation Board report noted that that, “MPRB staff are encountering unsafe situations in the evening with locking up the bathrooms” and the portable restroom provider announced that it wants police to be there when its employees service the bathrooms because “encampment residents are going through their vehicles.”

If the lefty activists want to defund the police, they’ll have to be the ones fixing the toilets.

Not that it matters because the reports also mentioned high concentrations of “biohazards”.

You too can experience the brave new future of public safety. Just stop by Powderhorn Park. Try not to step on the needles, don’t make eye contact with the junkies, and be ready to run.

And remember, it’s not just public safety in Minneapolis that the Democrats are reimagining.