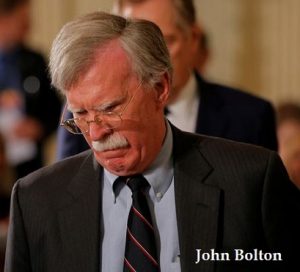 Courtesy of Fellowship of the Minds

Ever noticed that many rabid anti-Trumpers are moral degenerates?

Here is another example.

After he effectively was fired, Bolton publicly turned against Trump. He wrote a reportedly “scathing” book on Trump that the President’s attorneys are trying to stop from being published on the grounds that the book contains classified information.

In June, in an interview with the UK Telegraph, claiming that Trump doesn’t “represent the Republican cause that I want to back” — read: war-mongering — Bolton said he’ll vote for Joe Biden this November. (Note: Telegraph later amended the article to Bolton saying he will not vote for Trump.)

On July 11, 2020, Crazy Days & Nights published a blind reveal that John Bolton is a swinger.

July 2, 2020
As he makes the rounds of interviews, this very high profile author/government worker hasn’t been asked about his ex and their swinger lifestyle. He paid her off but there are people out there willing to talk.John Bolton

So I went on the net to try to verify the blind reveal, and found several reports (Daily Kos, New Zealand’s Scoop News) confirming the reveal.

The reports all cited pornographer Larry Flynt as the source. Below is Flynt’s account:

May 11-LOS ANGELES – Court records concerning the divorce of John R. Bolton, the Bush administration’s nominee to become the next ambassador to the United Nations, show his first wife fled the couple’s marital home when he was traveling abroad in mid-August 1982. The records further show that she took most of the couple’s furniture.

Corroborated allegations that Mr. Bolton’s first wife, Christina Bolton, was forced to engage in group sex have not been refuted by the State Department despite inquires posed by Hustler magazine publisher Larry Flynt concerning the allegations. Mr. Flynt has obtained information from numerous sources that Mr. Bolton participated in paid visits to Plato’s Retreat, the popular swingers club that operated in New York City in the late 1970s and early 1980s.

“The first Mrs. Bolton’s conduct raises the presumption that she fled out of fear for her safety or, at a minimum, it demonstrates that Mr. Bolton’s established inability to communicate or work respectfully with others extended to his intimate family relations,” said Mr. Flynt. “The court records alone provide sufficient basis for further investigation of nominee Bolton by the Senate.” (Click here for court records). Mr. Flynt continued, “The U.S. Ambassador to the United Nations must be free of any potential source of disrepute or blackmail.”

Mr. Flynt has contacted the State Department asking that they confirm or deny the allegations of Mr. Bolton’s prior conduct concerning his wife and the alleged paid visits to Plato’s Retreat. He has also called upon the Senate Foreign Relations Committee to conduct an inquiry into the very serious evidence concerning his first wife’s fear of him.

Neither the State Department nor the Senate Foreign Relations Committee has yet responded to Mr. Flynt’s inquiries.

The Hustler magazine publisher demanded an immediate response from Mr. Bolton. Mr. Flynt has personal knowledge about sources corroborating the allegations of nominee Bolton’s misconduct, and he has called upon these persons to publicly come forward with their information.

“First wife Christina Bolton has understandably remained silent on what led her to flee her husband of 10 years and to take the family belonging with hers. A full inquiry would necessarily involve meetings with Mrs. Bolton to uncover the circumstances of her flight and the Committee should subpoena her in private session,” Mr. Flynt said.