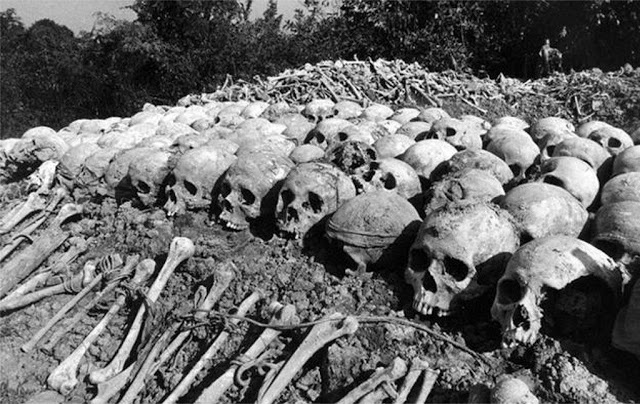 Under 400,000 slaves were brought to America. Those enslaved African people represented only 3.6% of the transatlantic slave trade. By the Civil War, there were under 4 million black slaves in America.

Over 20 million people were imprisoned by Soviet leftists in the gulag system.

Under 2 million people died as a result of the brutal leftist system of slave labor camps and that was a fraction of the full number of people killed through various means by the Socialist system.

Gulag labor was murderous with prisoners sent to work in uranium mines or to labor outdoors chopping trees and digging canals in subzero weather with little food and less protection. At one gulag, prisoners labored in uranium mines, breathing in radioactive dust, and dying within two years of cancer and leukemia. The sick were then used for medical experiments by Socialist medicine before they died.

These horrors were not some relic of the Stalin era, but were being carried out as recently as the 1970s. 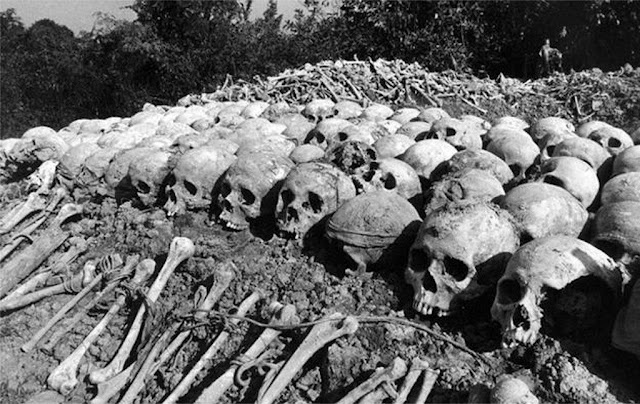 The 1619 Project of the New York Times falsely claimed that America was built on slave labor, but before that revisionist history project, the paper had run a Red Century project defending Communism when Soviet Socialism was, from Moscow University to the White Sea-Baltic Canal, built on slave labor.

At its peak, as many as 1 in 5 Soviet construction workers were convict laborers and massive slave labor projects like the White Sea-Baltic Canal, hailed as triumphs of socialism, killed tens of thousands.

When Senator Bernie Sanders visited the USSR, he gushed over its socialist achievements, such as the Moscow Metro. The massive system had been built by Stalin to showcase the achievements of socialism and the Putin regime restored the old plaque reading, “Stalin raised us to be loyal to the nation, inspired us to labor and great deeds”. But it wasn’t inspiration that built the Moscow Metro: it was slave labor.

“There’s a reason Joseph Stalin had gulags,” Kyle Jurek, a Bernie Sanders field organizer had argued, calling it a model for breaking Americans of their “privilege” by sending them to “go break rocks.”

Nobody would propose a return to the plantations, but forced labor is still popular with some socialists.

The Soviet Socialist system was built on forced labor, from the collective farms that peasants were not allowed to leave, to mandatory ‘volunteer’ brigades like those that helped build the Moscow Metro or harvested crops, to a massive slave trade in convict labor which built roads, tunnels, and canals, mined and did every form of dirty work, and was traded back and forth to Socialist civilian organizations.

The Soviet Socialist achievements that American leftists praised were the product of slavery.

While the Left demands that America make a reckoning for 19th century slavery, its leading figures, from Bernie Sanders to Noam Chomsky, were apologists for socialist slavery, and its leading institutions, from the New York Times to the Pulitzer Institute, both promoters of the 1619 Project, were complicit in covering up slavery and mass murder by their socialist allies in the Union of Soviet Socialist Republics.

The brands telling Americans that they need a reckoning with slavery have their own reckoning.

Slavery has been a fundamental feature of the socialist regimes admired by American leftists expressed in murderous abbreviations from the Soviet GULAG to Cuba’s UMAP camps for Christians, to China’s RTL. The Khmer Rogue in Cambodia turned forced labor into genocide and this was not all that unusual.

Southern slave owners, especially once shipping in new slaves was banned, wanted to profit from selling slaves and this resulted in a high population growth among enslaved African people, while the Soviet Socialist gulags, like their National Socialist counterparts, extracted maximum labor from their prisoners with no interest in their physical survival. They knew where they could easily get more slaves.

The National Socialists used slave labor to clear away unwanted conquered populations, Jews, and others who were not official members of the Herrenvolk, while building up the industries of conquest. The Soviet Socialists also used the gulag system, along with mass starvation and executions, to clear away unwanted ethnic and national minorities, including again Jews, but also to purge their system.

The Soviet Socialists used slave labor to eliminate potential dissent and terrorize the population on a much larger scale because while the National Socialists had used mass murder to achieve racial homogeneity, they used it to obtain political homogeneity as the basis for their system.

Both the National Socialists and Soviet Socialists envisioned an endless supply of slave labor that could be obtained through conquest. The South had internalized slavery, while the Socialists externalized it.

Socialist slavery was not an aberration: it was the essential idea of Marxism and of Socialism.

That was based on an idea from Karl Marx, who had had described the ideal Communist society as a place where, “labor has become not only a means of life but life’s prime want.” The message echoed the one placed over the gates of National Socialist concentration camps, “Arbeit Macht Frei” or “Work makes you free.”

The Soviet Union, like other socialist regimes, had defined itself as a worker state. But the nature of work, where and how one worked, was defined by the institutions of the state. Slavery was the founding principle of socialism which defined life around labor, not for the self, but for the collective good.

“Socialism is the final concept of duty, the ethical duty of work, not just for oneself but also for one’s fellow man’s sake, and above all the principle: Common good before own good, a struggle against all parasitism,” Adolf Hitler had articulated in a Munich speech titled, Why We Are Anti-Semites.

Parasitism was the basis for forced labor in the Soviet Union and other Socialist regimes where the state defined who workers were and what legitimate work was. Citizenship in a workers’ state meant a willingness to labor on those terms. A failure to do so was parasitism which would be punished with redemption through labor. The “Arbeit Macht Frei” message of National Socialist concentration camps, derived from a 19th century novel about the moral redemption of forced labor, and the celebratory Soviet songs and poems of forced labor celebrated work as the true religion of a socialist state.

Southern slave owners justified the subjugation of human beings by asserting that forced labor gave meaning to inferior people, uplifting them from a degraded condition, and taking care of them.

Socialist slavery was based on the same premise and provided justification for Southern slavery.

“The dissociation of labor and disintegration of society, which liberty and free competition occasion, is especially injurious to the poorer class; for besides the labor necessary to support the family, the poor man is burdened with the care of finding a home, and procuring employment,” George Fitzhugh, one of the most vocal advocates for the Southern plantation, had argued. “Slavery relieves our slaves of these cares altogether, and slavery is a form, and the very best form of socialism.”

Fitzhugh believed that not only black people, but that most people should be slaves to protect them from the fierce competition of a capitalist society.

The doctrines of Socialism helped inspire Southern slave owners to defend the plantation.

“Every plantation is an organized community,” Rep. William Grayson had mused. “A phalanstery, as Fourier, would call it, where all work, where each member gets sustenance and a home.”

Fitzhugh had also argued that, “a well-conducted farm in the South is a model of associated labor that Fourier might envy.”

Charles Fourier, the utopian socialist who coined the term ‘feminism’, had wanted to wipe out the Jews by sending them to labor in his phalansteries, massive utopian communes, as his original vision of utopian socialist communes had given way to labor camps that would break the enemies of socialism.

Socialist slavery begins with idealistic visions, but all the schemes based on willing cooperation fall through. The peasants cling to their land and have to be forced into communes. The workers don’t want to work and have to be compelled. The volunteers don’t show up and volunteering becomes mandatory.

America has spent centuries making a difficult and bloody reckoning with slavery. Its leftist enemies have rarely bothered to even make the effort, blaming crimes on individual leaders, on poor conditions, and on interference by America in hellholes like Cambodia that would otherwise have been utopias.

And, no matter how much we learn about the Socialist mass killings, rehabilitation is always waiting.

The Left has failed to make a reckoning with slavery. That’s why the media nods sympathetically at old Communists, and clucks over McCarthyism even as it cancels random people over minor missteps. Its preeminent revisionist historian, Howard Zinn, was a Stalinist, its preeminent thinker, Noam Chomsky, defended the Khmer Rouge, and Bernie Sanders, its presidential candidate, praised the products of Soviet slave labor. These are the crimes of apologists for a contemporary Confederacy: a slave empire that spread around the world, killing millions, and enslaving countless millions more in systems of labor camps that dwarf anything that any Southern plantation owner could have imagined.

Statues of Columbus and Jefferson are under attack, but a statue of the greatest socialist slave owner of modern times still stands in Seattle.

Vladimir Lenin had set up the system of gulags that eventually enslaved and killed millions. Lenin’s plans had begun with “obligatory work duty” for class enemies, then evolved to the “most unpleasant forced labor” for members of the “propertied classes”, and then to camps full of slaves laboring to build socialism who had been sent there for even the most minor of offenses.

As Feliks Dzerzhinsky, the architect of the Red Terror and the secret police put it, “Even now the labor of prisoners is far from being utilized on public works, and I propose to retain these concentration camps to use the labor of prisoners, gentlemen who live without occupation, those who cannot work without a certain compulsion, or, if we talk of Soviet institutions, then here one should apply this measure of punishment for unscrupulous attitude to work, for negligence, for lateness.”

The purpose of the concentration camp was no longer to punish class enemies, but to find slaves.

That Lenin’s statue still stands in Seattle is a testament to the reality that the Left has made no reckoning with its history of slavery. It has not repented of its crimes against millions of people.

The greatest slave empires of the modern era were not Southern, they were Socialist.

Conservatives have spent enough time defending the Founding Fathers. It is time to stop being on the defensive and attack the leftist proponents of modern slavery who propose to tear down their statues.