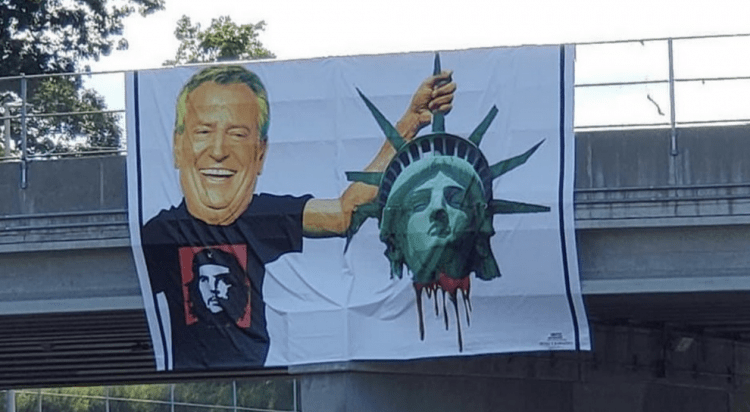 The most reviled and despised Mayor inn America and that is saying A LOT.

New Yorkers’ anger with Mayor Bill de Blasio appeared to reach a boiling point Tuesday – with a banner of the mayor unfurled over the Staten Island Expressway.

Some New Yorkers’ frustration with Mayor Bill de Blasio appeared to reach a boiling point Tuesday – with a banner of the mayor unfurled over the Staten Island Expressway.

The banner showed the Democrat wearing a T-shirt of the late Marxist revolutionary Che Guevara and holding the severed head of Lady Liberty.

“It’s what he’s doing to New York, he’s severing the head of the greatest city on Earth,” Scott LoBaido, the artist behind the banner, told the New York Post.

“It’s what he’s doing to New York, he’s severing the head of the greatest city on earth,” said the artist behind the eye-grabbing work, Scott LoBaido.

The Staten Islander was spurred to take a stab at Hizzoner over his response to the Black Lives Matter protests raging in the Big Apple.

“New York has turned into a sh–hole because of this guy,” LoBaido said of the mayor. “He hates the true New Yorkers: police officers, firefighters… people who built this city.”

The pro-Trump artist was also angered that a blue line he painted to support of the NYPD in front of the 122nd Precinct in New Dorp Monday was vandalized with “Black Lives Matter” graffiti shortly after it was completed.

“That thin blue line separates anarchy from civilization,” he told The Post.

So LoBaido put his feelings down on paper, and hung his striking banner over the expressway’s west-bound ramp Exit 13B during afternoon rush hour.

His aim was to “fire up the masses” about De Blasio’s lacking leadership — and he said several cars honked their horns “like crazy” as the work was unveiled.

While cops asked LoBaido to take the print down about an hour and a half after it went up, the controversial artist said he’s got plans to hang it elsewhere in the city in the future.