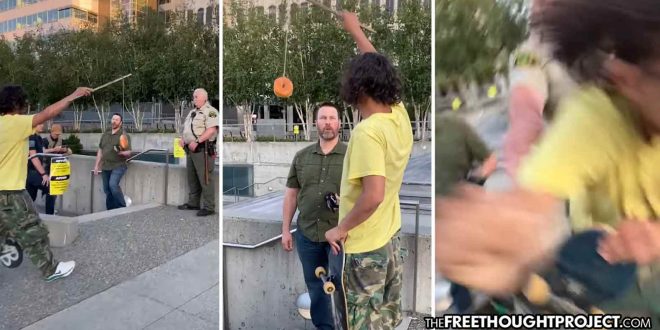 Everett, WA — Hanging a donut from a string and dangling it in front of people while on public property may be in poor taste — but it is most definitely not illegal. However, cops in Everett, Washington appear unconcerned with legality all together. In a video posted to Facebook this week, cops are seen attacking an innocent teenager and then falsely charging him with assault over their violence.

During the pro-police “Back the Blue” rally in Everett over the weekend, an 18-year-old man made a joke by tying a donut to a string and dangling it in front of the cops.

As the video shows, the teen skates over to the officers who are standing around after the rally, organized by the Snohomish County Republican Party. Judging from his BLM and ACAB skateboard, the teen was obviously a counter protester at the Blue rally.

As the young man rolls up, he asks the officers if they want a donut and everyone standing around starts laughing and playing along.

“I wanted to know if any of you guys wanted a bite?” he asks two Snohomish County sheriff’s marshals in the video, dangling the donut in front of them as they laughed. One young man in the group even laughed and said he’d already eaten “like 10 donuts” already that day.

However, there was one plain-clothes lieutenant who didn’t find the teen’s shenanigans too pleasing.

“Get that f**king thing out of my face, or I will whoop your a**! Get the f**k away from me,” the unidentified cop says before his boys in uniform jumped in, seemingly smelling the blood in the water. An officer identified as marshal James Simoneschi quickly attacks the teen, shoving him backward — an actual assault.

“Back off! Back off! He assaulted a lieutenant,” that marshal shouts. “You back off or you’ll go to jail.”

While shoving the teen backwards and threatening to arrest him over his donut prank, the cops placed him under arrest and then charged with assault.

The teen was booked into the Snohomish County Jail for investigation of fourth-degree assault and released the next day after making bail of $1,000.

“I thought, ‘Oh, it’s just a kid pulling a prank,’” Olushola Bolonduro, 26, one of the organizers of the counter-protest, said, according to the Everett Herald. He said he would understand if the deputies were annoyed, or if they gave him a warning, but arresting him seemed petty.

Indeed, it not only seemed petty, but it also seems illegal. When watching the video below, it is clear that no assault took place and both the teen and the donut touched nothing.

The Herald obtained a copy of the arrest report in which Simoneschi wrote that the man had pushed the stick toward the plain clothes lieutenant’s face. The lieutenant was standing on a set of concrete stairs with a retaining wall and hand rail behind him, unable to back away, according to the report.

That’s when Simoneschi pushed the man away, he wrote.

After, the young man “asked another protester, ‘did you get it’ and she stated, ‘yes I did,’” Simoneschi added.

Even according to the marshal’s own report, literally no assault took place. Clearly, this arrest was over contempt of cop and not an issue of public safety.

This teen will likely retain an attorney now and sue the department for civil rights violations all because cops threw a temper tantrum over a donut.