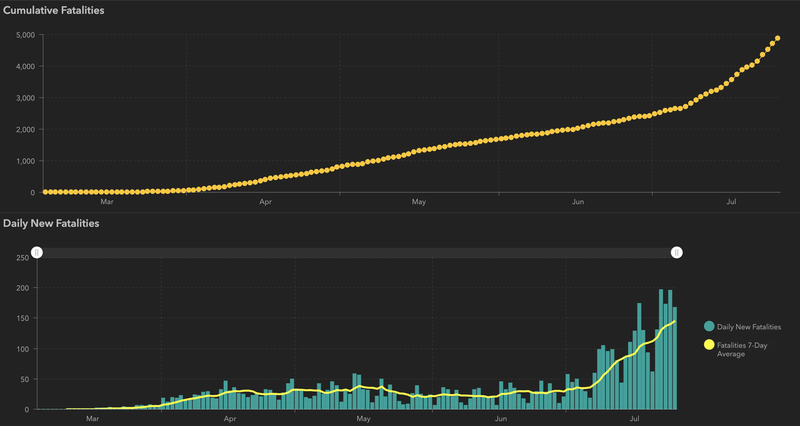 Update (1920ET): The state of Texas reported another 8,112 coronavirus cases on Saturday, as the number of single-day cases trended lower for the 4th straight day…

…even as the number of deaths declined slightly, though the pullback wasn’t large enough to stop the 7-day average for daily deaths from climbing to a new record high. The 7-day positivity rate for cases, however, declined to its lowest level since July 3.

In other news, a judge in New Jersey has ruled that Atilis Gym, a gym in Bellmawr, NJ that has gained national attention for refusing to close, can be forcibly shuttered by the state Department of Health.

The DoH is “authorized to place locks on the doors to Atilis Gym of Bellmawr or otherwise construct or place barriers on or around the premises to ensure compliance” with state closure orders, Judge Robert Lougy ordered in his ruling. He also ordered the gym to “not obstruct [state health authorities] in any way from carrying out the terms of this order.”

The owners of the gym slammed the governor, Phil Murphy, for continuing to “unconstitutionally shutdown” the gym.

“It is absurd that Governor Murphy continues to unconstitutionally shutdown gyms while other indoor exercise continues including gymnastics, dancing and Kickboxing. This attests to the randomness of the Governor’s orders,” Mermigis said.

Finally, in another finding that shows just how vulnerable the oldest and most sickly among us are to the virus, in Florida, 46% of all COVID-related deaths in the state have been linked to long-term care facilities, according to new data released by the Florida Department of Health. That’s 2,645 out of 5,777 total deaths, to be more precise. That’s still far less than in New York, where some 6,500 deaths have been linked to nursing homes.

California’s non-ICU hospitalizations declined by 57, while the number of occupied ICU beds increased by 17.

In other news, Florida finally surpassed New York on Saturday in the ranking of US states with the largest number of cases.

Today's update on the numbers:

The ranking is now California, Florida, New York, Texas, though the Lone Star State is certainly on track to surpass the Empire State, and will likely pass its total in the coming week, barring an unforeseen resurgence of new cases in the northeast. California’s rate of spread was 1.05, indicating the virus is still spreading.

With deaths showing few signs of peaking across the Sun Belt, the US looks like it’s set to report more than 1,000 deaths in 24 hours for the fifth straight day.

Yesterday, the US and the global community reported record single-day increases in new cases, while globally, the 7-day average for confirmed deaths had reached its highest level since late April.

Update (1200ET): The state of Arizona reported 3,748 new cases of the coronavirus on Saturday, bringing the statewide total to 160,041. The state also reported 144 new deaths, bringing its statewide death toll to 3,286.

Statewide, the rate of spread – represented by R-sub-t – has slowed to 1.00

Update (1120ET): In the latest sign that nothing has really changed in Florida – although it has been roughly three weeks since the state reported its last record tally of new cases, it notched its single-day record for deaths just two days ago, and the states COVID wards are as crowded as ever – the state reported another 12,199 new cases (+3%) on Saturday, bringing the statewide total to 414,511.

The state reported another 126 deaths, pushing the state’s coronavirus-related resident death toll to 5,777.

In other news, weeks after testing positive, Brazilian President Jair Bolsonaro announced Saturday that he had finally tested negative.

It has been another disappointing week for coronavirus numbers out of the US. Although hospitalizations and new cases have, encouragingly, moved decidedly lower in some of the worst-hit Sun Belt states – Arizona is perhaps the best example – the region is now struggling with what appears to be the delayed wave of deaths that Dr. Fauci and other health experts had promised, while hospitalizations and new cases remain elevated.

However, if there is a silver lining in all of this, it’s that the outbreaks afflicting the Sun Belt states have so far proved much less deadly than what happened in New York.

The absurdly high level of fatalities in the Greater New York area has been linked to both the large number of unconfirmed cases (antibody surveillance has shown some neighborhoods in the Bronx have as much as 60% penetration) and a staggering failure of leadership from Gov Cuomo.

Cuomo’s office allowed thousands of deaths that could have been avoided by sending COVID-19 positive patients back to their long-term care facilities, leading to a wave of nursing home outbreaks that contributed to more than half of the deaths recorded in the state. For all the criticism the New York Times heaps on Florida Gov Ron DeSantis and Georgia Gov Brian Kemp for their unwillingness to take decisive action, Cuomo’s horrifying policy blunder is arguably the deadliest mistake made by a governor.

But we digress. As we await the latest round of daily tallies, it’s worth noting that the world reported a new record jump in new cases yesterday, as the daily tallies in Brazil, India and the US have climbed at a rapid clip. According to WorldoMeter, 289,028 new cases were reported around the world yesterday (remember, these data are typically reported with a 24-hour delay).

The world reported 6,199 deaths yesterday. The daily tally was well below the record numbers reported in mid-April, but the increase brought the 7-day average to its highest level since late April.

Keep in mind, Worldometer’s numbers typically vary – sometimes by a modest margin – from the numbers reported by Reuters, the AP and Johns Hopkins. The latter of these has become the international standard, though many other tallies exist and are regularly cited by the English-language press around the world.

But all were pretty much in agreement on this: Yesterday, the US recorded more than 1,000 deaths for the fourth day in a row, pushing the 7-day average to its highest level since late April.

What’s more, the US reported 78,009 cases yesterday – a new single-day record, and the first daily tally north of 78k.

Death-wise, the US recorded 1,141 new deaths yesterday, to be exact.

As Trump pushes for children to return to school across the country in the fall, provoking understandable fears that this might spark a surge in deaths, it’s worth remembering that the virus’s propensity to infect and kill the most vulnerable patients has been substantially mitigated as health-care professionals have honed their techniques, and studies have shed more light on the ability of therapeutics like remdesivir to help patients with the most severe symptoms. Dexamethasone also comes to mind, as at least one high-quality study has shown the drug to be surprisingly effective in patients with severe symptoms. Hydroxychloroquine, a common anti-malarial drug that has been commonly used for decades, has been shown in a handful of studies to slow the disease’s advance during the early stages, though some studies examining the drug’s impact on seriously ill patients have shown undesirable side effects in a small number of patients.