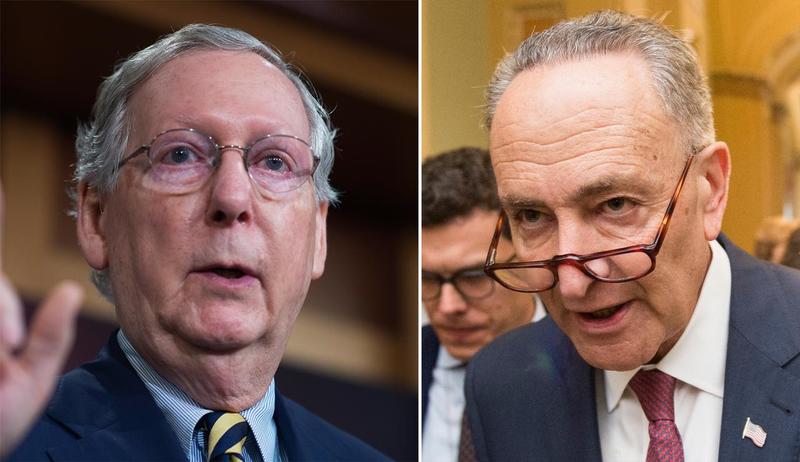 Update (1650ET): After Mitch McConnell (R-KY) confirmed earlier reports on Monday that the GOP bill would drop the $600 per week bonus unemployment stimulus to $200, and includes another $1,200 in direct payments to American adults, Senate Minority Leader Chuck Schumer (D-NY) took to the Senate floor and stomped on his crayons – calling the Republican proposal “unworkable.”

“The Senate majority was content to do almost nothting for three long months,” said Schumer,” adding “We are on the precipice of several cliffs.”

Sen. Schumer: "Senate Republicans dithered for what seems like an eternity." pic.twitter.com/UAiFWR5lim

He also said that if the $600 weekly supplement hadn’t been adopted in the CARES Act, we would most likely be in the midst of a depression now – and if not extended, “We could go into a depression” (Via IBTimes).

The White House and Senate Republicans are set to propose cutting the $600 weekly emergeny unemployment bonus down to $200 until states can implement a new approach which would pay workers 70% of their pre-pandemic income, according to the Washington Post‘s ever-anonymous DC leakers.

The GOP is planning to release a letter later on Monday which will outline their $1 trillion stimulus bill aimed at mitigating the economic fallout from the coronavirus, as the $600 per week jobless benefit is set to expire at the end of the month.

Over the weekend, Treasury Secretary Steven Muchin and White House Chief of Staff Mark Meadows suggested that Congress might do better passing a narrow bill in the short-term, which would include money for schools, unemployment insurance and pandemic-linked liability protections for various industries.

Democrats – who initially balked at carving out an emergency extension for the bonus unemployment, now want to preserve the benefit until January.

The new plan was discussed on an internal call with congressional Republican staffers on Monday, one of the people said. It appeared to be a new development. On Sunday, Treasury Secretary Steven Mnuchin denied in a Fox News Sunday interview that they would propose lowering the unemployment benefit to a specific dollar amount, saying instead it would be based on a formula.

The late afternoon roll-out will come after Treasury Secretary Steven Mnuchin and White House Chief of Staff Mark Meadows spent the weekend on Capitol Hill negotiating final language with key Senate aides. It will be the second try for Senate Majority Leader Mitch McConnell (R-Ky.), who had planned to unveil the bill last Thursday. That was canceled at the last minute amid disputes over language on unemployment insurance and other issues. –Washington Post

The GOP proposal is also expected to include another $1,200 round of direct checks to individual Americans – subject to income-based reductions, as well as a “limited moratorium on evictions,” according to the report. Also included will be billions of dollars for schools, as well as a five-year liability shield for businesses, healthcare providers and other industries.

Meanwhile, $100 billion will be carved out for the Paycheck Protection Program – which we expect hedge funds and public companies to promptly tap despite its intended

There will be no money for state and local governments in the Republican plan – a central component of House Democrats’ $3 trillion bill passed in May. Instead, $150 billion from the March Cares Act will be made available for state and local leaders.

Also excluded will be the payroll tax cut pushed by the White House, though the FBI may receive a new headquarters as part of the package.

Democrats are now attacking Republicans over the delays.

“We have unemployment running out, we have renter protection running out, we have state and local governments going into new month and won’t have the money and will lay off thousands and thousands of people,” said Senate Minority Chuck Schumer (D-NY) Monday morning on MSNBC. “We’re at all these cliffs and we still at this very moment don’t have a plan from the Republicans. We want to sit down and negotiate. But you can’t negotiate with a ghost.”